Looking at Protesting in China

Protest and resistance in China continues. We look at causes and consequences.
July 22, 2021
Print 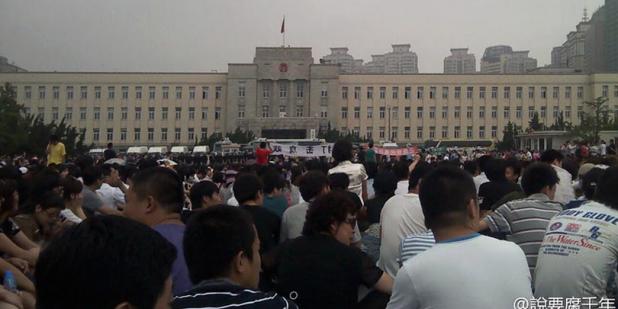 Mass demonstration in Dalian in August 2011 in opposition to oppose plans for to build a paraxylene (PX) chemical factory (image circulated on Weibo).

While the Constitution of the People's Republic of China guarantees "citizens of the People's Republic of China enjoy freedom of speech, of the press, of assembly, of association, of procession, and of demonstration," in practice protests are closely monitored and shut down by police. Some large protests gain international attention, like those in Tiananmen Square and across China in 1989 and the more recent demonstrations in Hong Kong, most don't get covered by news organizations. There are a lot of them. The Chinese government reported the number of "mass incidents" grew from 8,700 in 1993 to over 87,000 in 2005, the last year it released an official count. Sun Liping 孙立平, a sociology professor at Tsinghua University, estimated that there were up to 180,000 in 2010—or 490 protests every day. "Stability maintenance" is a priority for China's leaders and they invest immense time and resources into "winning the battle for public opinion" and squelching discontent.

The protests often complain about government action or inaction, but the grievances cover a wide range of issues involving labor disputes, rural land grabs, environmental damage or perceived threats, how women or minorities are treated, the actions of other nations, conditions for demobilized soldiers and policing practices. The China Labour Bulletin’s Strike Map has already documented 451 strikes this year. Below are some of the USC U.S.-China Institute events and films about protests in China.

Later today, USCI hosts a talk by and discussion with political scientist Teresa Wright on how, when, and why Chinese protest and how the targets of these complaints respond, illuminating key issues such as the stability of China’s political system and future state-society relations. We hope you'll join us.

This segment in the Assignment: China series focuses on the coverage by American news organizations of the dramatic events in Beijing in 1989. Students and others marched in cities all over China, but it was the demonstrations in China’s symbolic center, Tiananmen Square, that captured the attention and imagination of people worldwide and especially in the United States.

In The People's Republic of Amnesia, Louisa Lim examines how some within China remember the demonstrations and their suppression despite the efforts by the party-state to suppress unauthorized views of what happened.

We've had several events focusing on protests in Hong Kong. In 2014, David Zweig's looked at the "Umbrella Revolution." In 2019, Francis Lee, Robert Chung, Samson Yuen, Fiona Ng and Robert Koepp looked at what was driving protests, who was joining them, how they were conducted, how the government responded and how the broader Hong Kong public saw the actions of the various sides. In 2020, Jeff Wasserstrom looked at how tensions had developed since 1997, putting "Hong Kong on the Brink" and Antony Dapiran described links between earlier protests and the 2019 demonstrations, which were triggered by opposition to an extradition law. Those protests led China's central government to enact a National Security Law for Hong Kong. Michael Davis discussed that law and how it is being implemented in his talk on "Making Hong Kong China."

The "Tremors" segment in the Assignment: China series includes an examination of at how the treatment of Tibetans led to an anti-Chinese riot in 2008 as China prepared to host the Olympics. Protests against Beijing's policies in Tibet sometimes focused on the Olympic torch relay. Those protests led to demonstrations against foreign businesses within China and at foreign media coverage of China.

Manfred Elfstrom shared his research into labor unrest in China, varying state responses, and the the long-term implications for both activists and the government. Longtime activist Han Dongfang screened We the Workers and discussed the current state of labor activisim in China. Han founded China Labour Bulletin and hosts a popular call-in program for Radio Free Asia. US-China Today interviewed Xiaoyu Qin, the director of Iron Moon, a documentary focusing on both the plight of Chinese migrant workers and the poetry some create.

Large scale demolition and relocation in urban China has visibly improved the lives of millions but also left hidden human wreckage at its wake. Domicide, violence, corruption, and arbitrary compensation have led to heightened housing dispute and persistent residents protest throughout Chinese cities. Qin Shao discusses her research on urban protesters and their evolving identities.

In 2015, Chinese authorities arrested several activists (later called the "Feminist Five") as they prepared to mark International Women's Day by handing out stickers to oppose sexual harrassment on public transit. Sociologist Leta Hong Fincher tells their stories and more in her presentation on "Betraying Big Brother."

Because of repression, protests have been difficult to stage or note in Xinjiang. USCI has had programs on this repression and its consequences, including a symposium featuring Nurnisa Kurban, Dru Gladney and Elisa Anderson and a subsequent presentation by Gladney on Xinjiang and China's Belt and Road Initiative ambitions.