Qin Shao discusses her research on urban protesters and their evolving identities as a result of prevalent housing reforms in China during the past three decades. 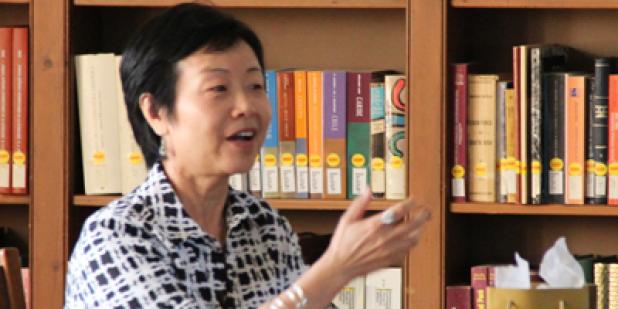 Housing reform has been at the core of China’s market economy and its success. Large scale demolition and relocation in urban China has visibly improved the lives of millions but also left hidden human wreckage at its wake. Domicide, violence, corruption, and arbitrary compensation have led to heightened housing dispute and persistent residents protest throughout Chinese cities in the past three decades.

Exploring what else was demolished along with old neighborhoods and what else, other than highrises, has risen at their ruins, Shao examined urban protesters and their evolving identities. At once victimized and empowered by the struggle, these resident protesters have collected and produced an impressive body of material to document their own experience in resisting demolition and pursuing justice. Their activities have helped reshape the political landscape from ground up. Based largely on oral history and with images from years of field research in China, the presentation addressed some of the key issues in the field of contemporary China studies, such as whether today's protesters are "rights conscious" or "rule conscious."The study is part of Qin Shao’s forthcoming book, Shanghai Gone: Demolition and Defiance in a Chinese Megacity.

Qin Shao is professor of history at The College of New Jersey and a visiting scholar at USC and visiting faculty member at UCLA. She has published on ancient Chinese statecraft, China’s early urbanization effort, and the post-Mao reform in international journals and is the author of Culturing Modernity: the Nantong Model, 1890-1930.  Qin Shao’s research has been awarded various fellowships, including those from the Humboldt University in Berlin, the Radcliffe Institute for Advanced Studies at Harvard University, the Woodrow Wilson International Center for Scholars, the Chiang Ching-kuo Foundation, the American Council of Learned Societies, and the National Endowment for the Humanities. She has presented her work at the Harvard Law School and the Institute for Advanced Study in Princeton, among other institutes.

This presentation was given on April 3, 2012 at USC. Click on the play button below to see the presentation..