The Party Throws Itself A Party 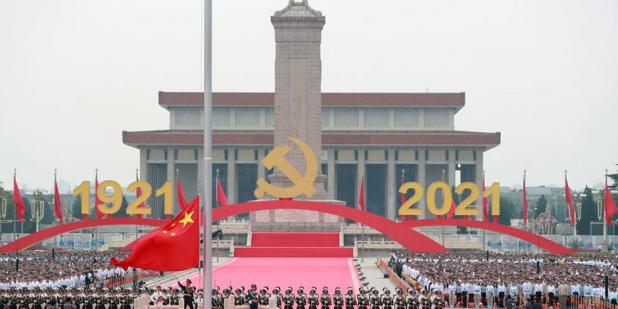 This morning the Communist Party of China marked the 100th anniversary of its founding. Xi Jinping's speech today capped a series of events and programs affirming the Party's primacy. Xi asserted, as does the propaganda song from 1943, that "without the Communist Party, there would be no new China." He also insisted that China wouldn't be bullied and that those who tried will be crushed in a collision with "a great wall of steel made of the flesh and blood of 1.4 billion Chinese people." In keeping with the birthday party norm, the focus was on achievements and not the tragic consequences of earlier Party policies and practices or the many problems of today. In 1981, the Party acknowledged some of those errors. Today, the Party views attention to such things as "historical nihilism," an effort to denigrate its leadership. The Los Angeles Times reported this week on Party-State efforts to control the narrative.

The Party, of course, has much to celebrate. A small group of delegates from Party cells gathered with foreign advisers in Shanghai and then Hangzhou in the summer of 1921 in what is called the Party's first national congress. It was nearly eradicated several times, but seized control of China in 1949. Its policies in recent decades have invigorated what is now the world's second largest economy. China's people, on the whole, live longer and more prosperous lives. Next year, the Party is expected to hold its 20th congress. Last week we looked at the size and composition of the 95 million member Party today. Below are some of the films and other resources we've created or compiled about China's Communist Party. 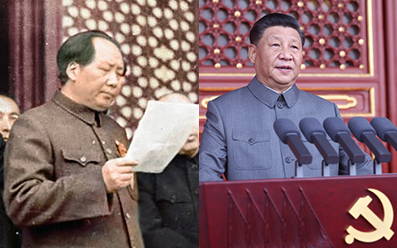 At its 2017 congress, the Party amended its constitution to include "Xi Jinping Thought on Socialism with Chinese Characteristics for a New Era" as its guide for action. It adopted two centenary goals: by 2021 to achieve a moderately properous society and by 2049 to "build a modern socialist country that is prosperous, strong, democratic, culturally advanced and harmonious." Click here to see the Party's constitution.

In 2018, the Party dominated National People's Congress amended the country's constitution to remove term limits for the president (国家主席 state chairman) of China. This was widely seen as eliminating any awkwardness for Xi Jinping to continue in office. There are no term limits for Xi's other, more important, positions heading the Party and the military commission. In 2018, the NPC was headed by a member of the Party's Politburo Standing Committee heads the body. 73% of delegates were Party members. Article 1 of the Constitution makes it clear who is to be in charge: "Leadership by the Communist Party of China is the defining feature of socialism with Chinese characteristics. It is prohibited for any organization or individual to damage the socialist system." Click here to see China's constitution. China's issued White Papers on its political system. The non-partisan Congressional Research Service has also looked at China's system.

Our multipart documentary series Assignment: China focuses on the journalists covering the remarkable changes in China since the 1940s. The correspondents interviewed influenced American understanding of China from the civil war of the 1940s through the Mao years, the Deng-era reforms and on to the Xi Jinping era.

Maoism at Home and Abroad

Julia Lovell evaluates Maoism as both a Chinese and an international force, discussing its impact and legacy within China and the influence of Maoism in places and periods as different as Southeast Asia in the 1950s and 1960s, Europe and the United States in the 1960s and 1970s and Latin America in the from the 1970s to today.

The Party-State and Chinese Society

Many of our conferences have included examinations of the Party's roles in China. In 2016, David Shambaugh, Mary Gallagher, Stan Rosen and Teresa Wright looked at politics in Xi's China. Ten years earlier, political scientists weighed in on prospects for political reform.

Timothy Heath, Senior International Defense Research Analyst of The RAND Corporation, looks at the context, drivers, and meaning of the governing party paradigm in China.

Xi Jinping announced a push to achieve the Chinese Dream in 2012. Towards that aim, in 2013 Xi launched China’s Belt and Road Initiative. China's government began encouraging firms to “go out” from the late 1990s, but BRI became the centerpiece of Xi's diplomatic and economic agenda. More than 100 countries and nearly 30 international organizations have signed Belt and Road memoranda of understanding with the Chinese government to cooperate with Beijing on facilitating connectivity and trade and fostering people to people exchanges.

China's Party-State has been guilty of significant violations of human rights. We've hosted several presentations and compiled documents examining these, including political controls, ethnic repression, of particular groups such as women and workers and the curtailing of rights in Hong Kong (here, here, here and here).

Searching the USCI website will yield many more presentations, reports and speeches on the Communist Party, its role in China and its efforts abroad.