Dikotter, The Discourse of Race in Modern China, 1992. 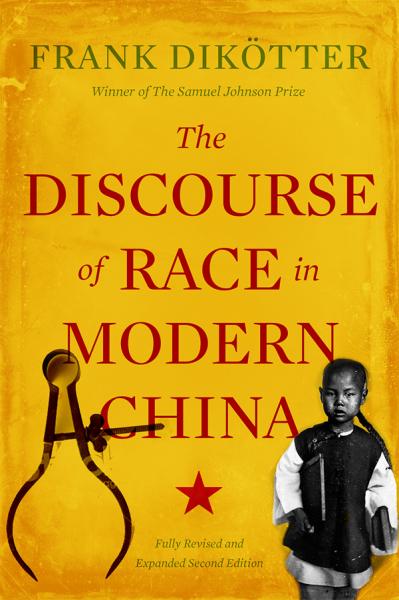 late nineteenth- and early-twentieth-century China. It has already resulted in the formation of research conferences, workshops, and panel presentations in the United States, Hong Kong, Australia, Taiwan and the People's Republic of China on the problem of race and culture in modern China.

I welcome this book for its courageous exploration of a topic that many scholars have chosen to ignore (for reasons that Dikotter should have addressed in much further detail). I applaud its attempt to bring a critical theoretical perspective to bear on complex historical material. Dikotter delves into the problematic of perception, as he attempts to link ideas of racial difference to practices of exclusion, marginalization, and national strengthening. The chapters approach the question of race in China through the dominant idioms of type, lineage, nation, species, seed, and class. The section on race and class in the post-1949 period, presented as an epilogue, is much too short, if only in that it is such a promising research area. I felt the most provocative chapters were those exploring the fascinating, if not somewhat horrifying, links between Chinese traditional practices of prenatal education (taijiao) and the eugenics movement that emerged during the New Cultural Movement (circa early 1920s). This section cries out for a comparison to the present moment, in which China's family planning practices are once again giving rise to eugenics and other forms of social and biological engineering. In short, each chapter in this book opens up fresh terrain for future research.

Focusing primarily on how ideas of race were deployed by late-Qing reformers, turn-of-the-century revolutionaries, and established academic and political officials in the Guomindang period up until the time of the Communist revolution, Dikotter convincingly demonstrates that various ideas of race were put into place and then at times furiously debated among Chinese thinkers who saw their mission as nothing less than saving China, and more specifically the Chinese "race," from a position of inferiority vis-a-vis the West. Dikotter thus rethinks the standard historical account of early Chinese modernity, by showing how racial thinking competed with and in some instances displaced Confucian conceptions of Chinese cultural universalism. This is an important corrective to a sinological scholarship which has tended to divorce racial consciousness from questions of cultural nationalism.

Dikotter reminds us that "classifications based on physical appearance have no scientific foundation. Races do not exist, they are imagined" (p. viii). To take us into the racial contours of the Chinese "symbolic universe"--a turn of phrase Dikotter repeatedly uses throughout this study--he employs the notion of "discourse," with its Foucaultian anti-essentialist overtones and its invocation of a theory of power as productive of subjectivities. But it is here, in the promise of a more nuanced treatment of how a discourse creates new subjectivities, and how subjects make use of and transform dominant discourses, that Dikotter's book ultimately falls short. "Race," as discourse, emerges in this study as a monolithic abstraction, under which notions of ethnicity, nation, lineage, and locality are all subsumed. As Dikotter himself knows, the Chinese perceive ethnicity, race, nation, and lineage as quite distinct phenomenon. What, then, is gained in arguing that they are all structured by a larger discourse of race? The promise of the book is to show that all of these categorizes are infused by acute sensitivities to biological-cum-racial differences between different human groups. One gets the sense that the everyday contradictions and tensions that have existed, and continue to exist, between these terms have been reduced to one totalizing category. This is unfortunate, for one of the main insights of post-structuralist theory has been to demonstrate that dominant discourses produce sites of contradiction and conflict; focusing attention on these contradictions is ultimately how one comprehends the productive possibilities of any discursive formation.

To my mind, Dikotter's study is too strongly characterized by an uncritical use of the terms China and the West. In part, it seems, this is a function of the author's larger political agenda. For Dikotter also attempts to show that racism is not only a "white," Euro-American phenomenon. For Dikotter, to locate race in China is to engage in a critique of Eurocentrism, to show how the Chinese too employed racial categorization and prejudice in the construction of their own "pure" race. This is arguably a long overdue reading of Chinese historical modes of othering. This approach, however, results in various omissions and simplifications. First, Dikotter ignores the question of Han Chinese perceptions of ethnic minorities within China, for these perceptions, he claims, always stressed sociocultural difference. Dikotter rather seeks to trace the Chinese confrontation with physically discontinuous peoples, those of radical phenotypical difference, mostly Westerners and Africans, the so-called "outside barbarians." To this end, Dikotter sets up the following structural opposition:

While this may be true at the level of "discourse," it tends to ignore that in practice cultural and racial typologies often overlapped, so much so that, as one works through imperial gazetteers and other historical documents of state, it is often impossible to discern whether officials are speaking racially, culturally, perhaps even epistemologically. For example, in the opening chapter of the book, it is hypothesized that ancient Chinese possessed a "mental link" between physical constitution and cultural level. We learn that the term "black" was used to refer to slave populations held by elite Cantonese in the twelfth century (p. 9-10). Yet these "black populations," known as "devil slaves" (guinu), were simultaneously identified by their skin (as well as lips and teeth) color and by the lack of various cultural traits, most notably the inability to eat cooked foods and to reproduce Chinese speech.

At issue here is the always vexing question of translation, of how one moves between text and context, metaphorical and literally description. I would argue, as I believe Dikotter himself would acknowledge, that the signifier "black" represents a much more complex discursive universe than a mere awareness of phenotypical variation suggests. Non-Han ethnic peoples throughout the south of China have long been identified through color coding; these modes of coding sometimes referred to skin color, sometimes to an occupational or class status, sometimes to the dyes used in clothing. Given the focus on how discourses both limit and enable understandings of the world, I wanted a more thorough exploration of how the Chinese awareness of non-white Westerners and Africans influenced, interacted with, and perhaps transformed Chinese modes of identifying "internal barbarians;" and how these two "symbolic universes" in turn informed each other. This is important because recent research on racial thinking, in both colonial and imperialist settings, has indicated that racial and cultural typologies often interact and reinforce each other; to treat them as distinct ontological categories seems a disservice to both the Chinese historical context, and to recent theoretical developments in the politics of reading and writing race.

In conclusion, Dikotter provides a critical reading of the historical contingencies and political uses of ideas of race by Chinese intellectuals. Its major drawback--which Dikotter himself repeatedly acknowledges--is that it virtually ignores the circulation of these ideas and their reception throughout differing sectors of Chinese society. Nonetheless, Dikotter does a fine job contextualizing the various intellectuals whose textual productions and thinking he explores in some detail. And it is important to point out that he makes no claims that these intellectuals represented all of China. One might demand a more critical treatment of the presumed division between the elite and the popular. And one could gripe that we never get a sense of how racial thinking influenced processes of Chinese state and nation building in the late nineteenth and early twentieth centuries. These complaints, however, should not distract from the fact that this book opens a huge window for future research.

At the very end of his discussion, Dikotter argues that the Chinese discourse of race "has never been translated into practice with the gruesome efficiency characteristic of certain western countries" (p. 195). Dikotter would have us believe that this discourse was nonetheless pervasive and tenacious. There is no reason to doubt this. What concerns me is a more glaring omission: how would a Tibetan, a Dai, a Uighur, or Mongol respond to the assertion that the Chinese discourse on race was never characterized by a "gruesome efficiency"? Or is Tibet to be reduced to an instance in which perceptions of sociocultural difference outweigh those of race? Dikotter's silence on these issues does not stem from any ignorance of the troubling politics of state and minority relations in China. In my view, it stems from his own sometimes narrow commitment to proving his thesis on the importance of racial thinking in Chinese modernity, and to his commitment to an organizing structure that uncritically opposes China to the West. In the end, we are reminded that these commitments, no matter how essential to the force of argument, also have their own moral economies of exclusion and inclusion.