Reviewed by: Kurt Hohenstein, Department of History, Winona State University.
Published by: H-Law (May, 2007)
Justice beyond the Great Wall: Crime and Punishment in China

When President Richard Nixon visited the People's Republic of China in 1972, he toured the Great Wall, symbolically opening the 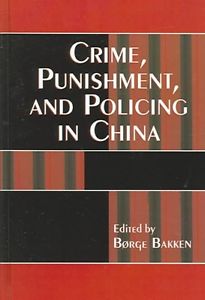 world's most populous nation--at the end of the Cultural Revolution--to western exposure. But it was not until 1989, when Premier Deng Xiopeng began to implement his capitalistic revolution that the real opening occurred. While the examination of China's economic expansion has been well told, the dramatic changes occurring in China's criminal justice system remains mostly shrouded in mystery. Editor Børge Bakken, in the essays from Crime, Punishment, and Policing in China, has removed much of that mystery.

One of the most valuable historical services that the book performs is to move the discussion of criminal justice reform back to the early republican era, after the fall of the Qing Dynasty in 1911, when Chinese scholars and elite were beginning to build their nation. Focused on the policing and the penal system, Chinese nationalists tried to create a system of penology that represented the modernizing trends many Chinese elite sought. The prison, as an educational and reformist institution, came "to represent the very idea of modernity in republican China" (p. 3). The reformist attitudes about prisons mirrored Chinese intellectual models found in Confucianism, which taught the concept of human malleability and educability in Chinese citizens.

Yet prisons were more than a mirror of past Confucian ideas. Reformers sought new ideas and implemented methods where work, education, and rehabilitation became inherent in republican prison systems. The system of "ganhua" still occupies an important part of Chinese thinking about prison reform.

This book of essays performs an important function through the critical analysis of the crime problem in China. Bakken contends that the "crime problem" is "partly a socially and politically constructed phenomenon" and demonstrates that the official Chinese government crime rates are, to a great extent, constructed by Party, police, the bureaucracy, and even the anonymous contract. The announcement of "campaigns of policing," large scale and systematic government policing and incarceration campaigns, commonly created in reaction to public perceptions of spikes in criminal activity, are often less representative of actual criminal problems than of strong efforts of government control. Yet these efforts and the criminals they ensnare are not mere political prisoners. Beginning in the 1980s, the majority of criminals incarcerated have indeed committed some crime in the international sense of the word. This is a far cry from 1958, when nearly half of all reported cases were termed "counterrevolutionary crimes" (p. 11)

The value of a comparative perspective on crime, prison populations, and penal theory is that historians and social scientists can reflectively examine the development of their systems against the examples of other systems. While the Chinese system has developed much later than other western models, the extent to which it has adopted and implemented its own reforms is remarkable. The emergence of China as a modern, economic power in the 1980s created enormous problems for its penal system. Lacking a history of reform, Chinese reformers had to create a new system that provided its authoritarian leaders state security, but also one that incarcerated and treated prisoners in a humane manner intended to produce reformed citizens.

The main criticism of the essays, which stems from the choice of topics rather than of the quality of the essays included in the collection, is the lack of examination of the nature of individual rights in China. Central to many western criminal justice and penal systems was the development of individual rights as a theoretical catalyst for reform. Lacking a discussion of the development of individual rights, democratic conceptions of citizenship, and the role of the state in relation to its citizens, the book fails to answer fundamental questions about the development and future of China's criminal justice system. The essays do not examine how the movement toward democracy, which unevenly coincided with the modernization of China's economy, played a role in the liberalization of its criminal justice policies and institutions. The last chapter by Michael Dutton considers how Chinese officials have begun to examine the "status of the law as a class tool," which opened up a debate "about the correct relationship that should be established between law and policing" (p. 198). But as Dutton describes, the government response was to increase policing efforts and. where those failed, to privatize enforcement through the use of private security firms. While he concludes that the police, through these actions, became "agents of change," one wonders if the changes have been deep or merely cosmetic, lacking an examination of the role of the law not merely as a form of public coercion, but as a symbol of individual rights.

Crime, Punishment, and Policing in China is a welcome and valuable addition to the growing body of comparative legal scholarship. Understanding Chinese attempts to reform and resolve their indigenous criminal justice system provides an illuminating window through which to examine and compare the success and failure of attempts to manage multinational criminal justice, policing, and punishment problems.