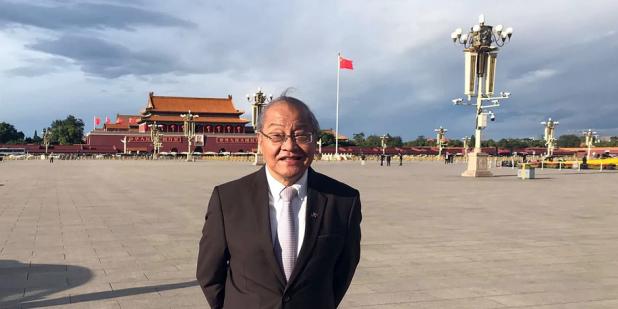 Many are familiar with the institute's 12-part Assignment:China series looking at American reporting on China from the 1940s to today. More than 51 million people have watched it. It's been screened at conferences and in classrooms on four continents. Here we share three bits of news on the series and journalists included in it.

First, we mourn the passing of Jose Santiago "Chito" Sta. Romana. Romana died in Beijing on April 18 at age 74. He first went to China in 1971 as leader of a student group. While there, political violence in the Philippines resulted in Ferdinand Marcos's government suspending civil liberties (and eventually imposing martial law). Members of the group that returned to the Philippines at the end of the three week trip were arrested. Romana and a few others elected to wait. He wouldn't go back for fifteen years. He and the others worked and studied. After the U.S. and China resumed normal diplomatic ties in 1979, it became possible for American news organizations to open bureaus in China. Romana, Jaime FlorCruz and Eric Baculinao were hired. Romana worked for ABC News, eventually becoming bureau chief. Their networks and fluency in Mandarin and English made them invaluable. In the Assignment: China "Opening Up" segment, you can watch "Chito" talking about this opportunity (USCI | YouTube, he speaks at the 36 minute mark). He can also be seen in the "A Tale of Two Chinas" segment, talking about how trying to cover a protestor resulted in the beating of a ABC correspondent (USCI | YouTube, 8 minute mark)

Romana retired in 2010 and returned to the Philippines. In 2016, however, newly elected President Rodrigo Duterte called upon him to return to Beijing as the Philippines ambassador. It was a tense time in the country's relations with China. In 2013, to push back against what it considered Chinese intrustion into its territorial waters, the Philippines asked the Permanent Court of Arbitration under the United Nations Convention on the Law of the Sea to hear the case. China refused to participate. In 2016, the arbitration tribunal ruled in favor of the Philippines. Duterte, anxious to forge better ties with China, wanted to ratchet back the tension. Romana told the New York Times in 2016, “The Philippines is shifting from a very close and tight alignment with the United States that made it seem we were part of the anti-China coalition... The pendulum may swing toward China. The alliance with the U.S. will stay. Relations with China were frozen from 2013, but now we will resume all types of dialogue.” Romana is credited with helping organize Chinese President Xi Jinping's 2018 state visit to the Philippines, Duterte's 2019 trip to China, and otherwise facilitating improved ties. The Philippines' Presidential Palace spokesperson said, “We honor Ambassador Sta. Romana for his contributions to strengthening Philippine-China relations.”

Next, we celebrate the announcement on April 19 that Joseph Kahn will be the next executive editor of the New York Times, replacing Dean Baquet. Kahn has been the managing editor of the paper since 2016. In 1987, after a short stint reporting in Texas, Kahn returned to school to study China. In 1989 he headed to China, using a tourist visa and publishing pieces as a freelancer, until he was booted out of the country, After completing his masters degree, he worked in Hong Kong and China for the Dallas Morning News, the Wall Street Journal, and the New York Times.

Kahn was part of a Morning News team that earned a 1994 Pulitzer Prize for reporting on violence against women. In 2004, Shanghai-based Kahn and Beijing-based Jim Yardley won the 2004 Harry Chapin Media Award for their reporting for the Times on inequality in China. In 2006, Kahn and Yardley won a Pulitzer for their reporting for a series of articles on flaws in China's justice system. Kahn appears in two Assignment:China segments. In "A Tale of Two Chinas," he talks about the eagerness of ordinary Chinese in the 1990s to learn about the outside world (USCI | YouTube 14 minute mark). In "Follow the Money," Kahn, now foreign editor of the Times, discusses interacting with Chinese authorities on the paper's exposé on the fortune held by the family of Premier Wen Jiabao (USCI | YouTube 30 minute mark).

Finally, we're delighted to report that Mike Chinoy has drawn on the Assignment:China series for a book to be published by Columbia University Press in 2023. An excerpt from the book, about Nixon's 1972 trip to China was published this week by the Columbia Journalism Review. It notes, "The coverage was arguably almost as important as the details of the diplomacy. It transformed American and international perceptions of China, generated the public support Nixon needed to change US policy, and laid the groundwork for the Chinese government’s gradual moves to open the country to greater coverage by American media." You can watch our "The Week that Changed the World" segment (USCI | YouTube).