This segment of the USC U.S.-China Institute's documentary series focuses on the period 1979-1983 when reporters from the U.S. were again allowed to be based in China. 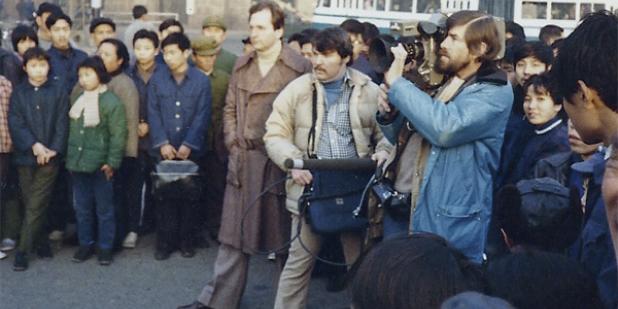 It was 1979. The U.S. and China had just established diplomatic relations. For the first time since the Communists took power in 1949, the Chinese government allowed American journalists to be based in Beijing. Assignment: China, "Opening Up" is their story.

Based on extensive interviews with virtually all the pioneering reporters who opened the first U.S. news bureaus in the People's Republic -- including Fox Butterfield, Jay and Linda Mathews, Richard Bernstein, Frank Ching, Melinda Liu, Jim Laurie, John Roderick, and many others -- the documentary also contains interviews with Chinese officials who sought to manage the Western media, people the reporters covered, as well as rare archival footage, still photos and previously unseen home videos.

This episode is one of several that make up an ambitious multimedia project exploring the work of U.S. China correspondents and the role they have played in shaping both American perceptions of the country and U.S. policy toward China. Assignment: China segments examine American coverage of China since the 1940s to today.

From the barriers of language, culture and politics, to the logistical challenges of war, revolution, isolation, internal upheaval, government restrictions and changing technology, covering China has been one of the most difficult of journalistic assignments. It’s also one of the most important. For over sixty years, what American correspondents have reported about China has profoundly influenced U.S. views of the country, and the policies of successive American governments.

In what one scholar has characterized as the “roller-coaster ride” of U.S.-China relations – from World War Two ally to Cold War enemy to common foe of the Soviet Union to “cuddly communists” embracing the market to emerging economic superpower and potential strategic rival – American journalists have played a central role. At varying times, they have been cheer-leaders, demonizers, romantics and cynics – struggling to understand a complex society with an opaque political system, buffeted by pressure from the authorities in both Beijing and Washington, not to mention pressure from their own editors and the remorseless deadlines of their profession.

Mike Chinoy, the distinguished former CNN Asia correspondent and USC U.S.-China Institute Senior Fellow, is the writer and reporter for the series. He is assisted by USCI Multimedia Editor Craig Stubing and USCI students, who handle much of the research, transcription, videography, and editing. Clayton Dube conceived of the Assignment: China project and supervises it.

The USCI Assignment: China website will soon feature additional resources for students, teachers, and researchers. Some documents at the USCI website touch on issues addressed in this segment on the 1979-1984 period: