Andrew G. Walder's book was reviewed by David Buck for H-Asia and is published here under Creative Commons license.
May 12, 2015
Print

A Root and Branch Criticism of Mao Zedong’s Leadership 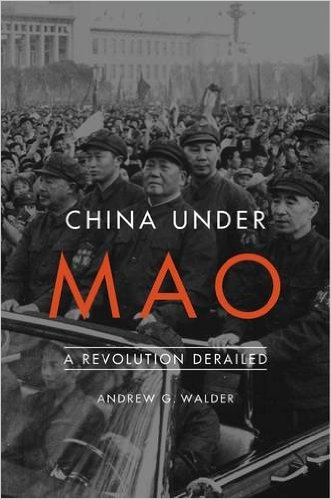 Chinese Communists differed from Joseph Stalin and the Soviet Union, Andrew G. Walder turns this interpretation on its head. He asserts that, even before Mao came to rule China in 1949, he had adopted political and economic strategies copied from Stalin. Walder then emphasizes how closely Mao continued to hew to Stalinist policies to the end of his life.

Walder cites four key characteristics of Stalinist rule that Mao transferred to the new People’s Republic of China. First, Mao fully embraced the Stalinist cult of an autocratic leader whose foresight and brilliance became regarded as indispensable for the revolution and nation. Second, he borrowed the Stalinist pattern of a single, all powerful party that penetrated all levels of the society. Third, and of great importance in Walder’s account, was Mao’s adoption of Stalinist economic ideas derived from History of the All-Union Communist Party (Bolsheviks): Short Course (1938). Walder shows that Mao never abandoned the core ideas of the Short Course’s economic model based on highly centralized economic plans that restricted consumption by both the rural and urban population in order to invest in heavy industry. Fourth, Mao policies over time increasingly depended on the Stalinist purge mechanism based on the premise that class struggle must continue in the socialist era because hidden, secret class enemies threaten to overturn the new order.

Walder admits the honest appeal of the Stalinist economic model for Mao and other Soviet-aligned states after World War II because of the success the Stalinist policies had produced during wars against fascism in the 1940s, but continues: “In retrospect, this was an ill-fated choice because that model of economic development ... eventually failed everywhere it was installed” (p. 7). Its principal flaw lay in the excessive amounts invested in heavy industry. The growth of that sector was inefficient and of limited usefulness when not engaged in an all-out war for national survival. Consumption of both food and other commodities stayed highly restricted, while housing, education, and other services remained at low levels in spite of significant economic growth. Walder’s chapter on the rural revolution—the most thoroughly studied aspect of the Chinese revolution—is clear and largely familiar. His succeeding chapters on the urban revolution, the socialist economy, and the evolving Communist Party system provide fresh and impressive descriptions of the new order established in the 1950s.

Walder continues his theme of how Maoist policies paralleled those of the Soviet Union in his discussion of Nikita Khrushchev’s February 1956 denunciation of Stalin. Most accounts of Mao’s reaction to Khrushchev’s speech have emphasized Mao’s immediate rejection of the belittling of Stalin because Mao realized his own position in China so closely resembled Stalin’s. Usually, Mao is cast as distancing himself from the de-Stalinization trend. Throughout the Soviet sphere there were conservative leaders who were reluctant to ease Stalinist control. Walder sees Mao, in his famous “Let a hundred flowers bloom” speech on May 2, 1956, accommodating the liberalizing trend in the Soviet bloc in the months after Khrushchev’s speech. However, Mao’s flirtation with post-Stalinist liberalization proved to be short, only five weeks. Then, Mao turned on those who had accepted his call for criticism of the new socialist order. Walder believes that Mao and the Chinese Communist Party leadership sensed “the situation was about to spiral out of control” (p. 148). He argues that Mao drew the fateful lesson “that the prosecution of class struggle was revived as one of the party’s central tasks” (p. 150). Walder finds that Mao returned to being an unreformed Stalinist.

Much of the rest of Walder’s account recounts how Mao turned to ever-repeated waves of class struggle in efforts to erase the difficulties his policies of the Great Leap Forward and the Cultural Revolution would produce. Walder concludes that by the time of the Cultural Revolution, “It is very hard to say what Mao did have in mind. What the Cultural Revolution eventually became was probably not anticipated by Mao himself, or by anyone else in the party leadership” (p. 200). The great helmsman had lost the course by which to steer the revolution.

Together with the centrality of class struggle in Mao’s policies, Walder finds that Mao’s special emphasis on rapid economic development derived from the Stalinist economic model found in the Short Course. Just as the emphasis on heavy industry helped the Soviet Union defeat Germany, Mao believed, forced, rapid transformation was necessary to bring socialism to China. In the 1950s, he forced the rapid collectivization of agricultural and industrial production. The crescendo was reached in the disastrous Great Leap Forward. In Walder’s judgment, “The Leap would have failed to spur economic growth” but it was the “political campaign that cast economic policy in terms of political loyalty, equating it with class struggle” that produced a great human disaster (p. 155). Mao would not listen that the revolution need not proceed so fast or with so much violence.

According to Walder by 1966, when the Cultural Revolution began, the Chinese revolution had come off the tracks. Yet the Stalinist and nationalist momentum behind the revolution carried on another decade until Mao’s death. Walder casts Mao in this last decade as repeatedly turning one way and the other in an ever-failing effort to keep the revolution alive. During the Cultural Revolution, Mao started with the students; then mobilized to the industrial workers; and when both became fractured by internecine struggle, he hoped Lin Biao and the People’s Liberation Army could salvage the cause. They produced no better results. In a final hope to recover from violence and chaos, he tried to revive the Communist Party by bringing back faithful Communists, such as Zhou Enlai and Deng Xiaoping.

As a sociologist, Walder sees bureaucratization as the inevitable consequence of the Soviet model. Mao, from his Stalinist perspective, saw the bureaucratization’s faults as evidence that counterrevolutionary forces remained a threat. Stalin dealt with the rigidities inevitable in bureaucratization by waves of purges in which fear of punishments meted out to both the innocent and the guilty produced compliance. Mao modified this approach by repeatedly encouraging popular attacks on the bureaucracy. Eventually the target became the Chinese Communist Party itself. Each time, Mao found his antibureaucratic forces lacking, because, from his perspective, they became infected with the same reactionary class flaws he sought to destroy. Calling on his power as the Chinese revolution’s charismatic leader, Mao purged each of the challengers he created to the bureaucracy. Yet, rather than successfully eradicating the problems, Mao’s policies, Walder believes, brought China ever closer to chaos.

There are many aspects of the Maoist era that Walder does not cover, but his new book provides a deep and damning appraisal of Mao’s leadership. Walder concludes that Mao was guided throughout his life by the “conviction that only violent conflict could bring about genuine social change and liberate the oppressed” (p. 336). Walder casts Mao as failing because he clung to this and his other core beliefs to the end.