Daniel Meissner reviews this book for H-Asia in February 2013.

Americans and Macao is the product of the "Americans, Macao and China, 1784-1950" conference held at the University of Macao in 2008. As 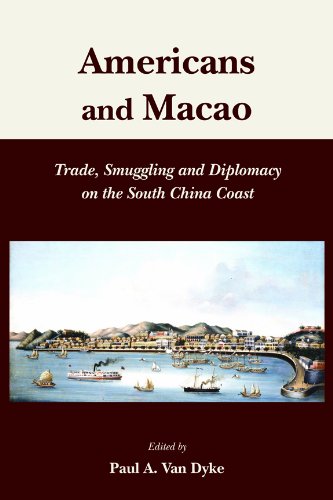 is sometimes the case, essay collections of academic conferences vary in quality, since some studies are the culmination of extensive research while others represent only initial work and preliminary conclusions. This collection unfortunately falls into this "mixed" category. Several of the essays present original research and new insight into trade, smuggling, and diplomacy on the South China coast, while others fill out the book with often interesting but generally tangential information.

Related to the uneven nature of the essays is a concern with the book's lack of focus. The title implies a collection of essays related to American involvement in various activities in and around Macao. However, this focus proves too narrow, resulting in the "and" in Americans and Macao being replaced with an "or," opening the door for essays on British patrol ships in the South China Sea and American women missionaries in north China. Despite the uneven quality and sometimes digressive topics of the nine essays, the book does have its merits as will be discussed below.

The first essay by John Wills attempts to provide historical context and historiographical perspective for the book. Beginning with a short background on Caleb Cushing, Qiying, and the treaty negotiations at the Wangxia Temple in Macao, Wills segues into an overview of late eighteenth-century state building that illuminates the historical divergence between an industrious West and a statist China. He presents the briefest of overviews, highlighting competition among Western nations for the acquisition of land and resources in Asia, where Western intervention resulted in the destabilization of traditional political systems. This process can readily be observed in Macao, which served as a conduit of trade between a cohort of aggressive Western states and a closed, conservative China. Wills suggests that new scholarship on Macao (such as presented in this collection) will provide greater insight into the early interaction of East and West.

Jonathan Goldstein's essay on early American opium trade with China concentrates on the very successful Philadelphia shipping firm of Stephen Girard. Although heavily engaged in the West Indies trade through the Revolutionary War, Girard cautiously entered the China trade in the early 1790s. By mid-decade, he was constructing a fleet of ships for the China trade where he would maintain a steady presence for nearly thirty years. Girard hired a China agent, Benjamin Wilcocks, the US consul in Canton and a pioneer in the American opium trade. Through Wilcocks's connections in the Ottoman Empire, Girard purchased and shipped Turkish opium to Canton, where it was smuggled into China (a process detailed in Paul Van A. Dyke's essay). Girard was encouraged in the trade by Wilcocks but warned against it by Howqua, his long-time Hong merchant. Although opium was a generally safe and extremely lucrative commodity, the Terranova (or "Emily") incident of 1821 shocked Girard, prompting him and other leading American merchants in Canton to abandon the trade. This rather short essay hints at further details and deeper insights that hopefully Goldstein will provide in future scholarship.

The third essay by Stephen Davies examines the South China trade through the experiences of a Scotsman, Daniel Ross, who commanded the British East India Company's (EIC) ship, Antelope. The EIC ordered Ross to survey the region, and patrol for pirates and French privateers. Davies provides few details of Ross's dealings with pirates (despite mentioning one incident when boatloads of pirates attempted to board the Antelope), but does include a fine section on Ross's search of foreign ships in Asian waters under the Navigation Acts. The essay not only sheds light on the function of the EIC's Bombay Marine, but also illuminates the tensions inherent in the early eighteenth-century South China Sea, where private traders, gunboats, pirates, privateers, and suspicious authorities all converged over the China trade.

Arguably the strongest essay in the book, Van Dyke's investigation of Pearl River smuggling examines the questions of why the center for smuggling shifted in 1820 from Whampoa and Macao to Lintin Island. In a tightly constructed argument, Van Dyke describes the process of smuggling goods by either passenger or cargo ship via Macao, Whampoa, or Lintin, and the complicity of Hong merchants, officials, compradors, and tidewaiters (ship guards) in facilitating this illicit trade. At Whampoa, the key to smuggling ship-bound cargo was the daily visit of the comprador assigned to provide fresh supplies to the crew. After making deliveries, the comprador withdrew with, for example, a chest or two of opium to be smuggled into the mainland. Both the tidewaiters and local officials were paid a "connivance" fee to look the other way. The system worked well, Van Dyke argues, until the fees demanded by officials became excessive.

In 1819, compradors went on strike, refusing to supply ships anchored at Whampoa. When officials did not respond to their protest, the compradors moved operations to Lintin Island beyond the immediate control of Canton officials. Here they established an ingenious smuggling system that facilitated the unloading of both legal and illegal goods and the reloading of fresh supplies along with a load of rice. Significantly lower duties were imposed at Whampoa on rice to encourage much-needed imports. Consequently, smugglers actually benefited by off-loading at Lintin and carrying through a cargo of rice, which could be exchanged for export goods in Whampoa. Linking this new system with the general theme of the book, Van Dyke implies that American ships played a key role in this system by supplying Manila rice to Lintin. Overall, this is a well-constructed, engaging, and informative essay on the particulars of Pearl River smuggling.

Frederic Grant Jr. investigates Canton from an equally stimulating perspective on early American trade. In this account, Wilcocks reappears as a somewhat shady character entangled in a web of loans and debt between Philadelphia merchants and the Hong merchant Conseequa (Pan Changyao). Through Wilcocks, Grant provides insight into the officially illegal (but Cohong guaranteed) system of loans, linking foreign merchants, shippers, agents, and Hong merchants. The core of his investigation involves a recently discovered interest-bearing note given in 1808 by Conseequa to Howqua. In 1820, the note was redeemed in Philadelphia against debts collected by Wilcocks for Conseequa. This complex case of interrelated loans and debt, Grant concludes, demonstrates the gray area in which early Canton trade was conducted. The business was risky and debt was accrued on both sides. Although loans between Hong merchants and foreigners--and the massive EIC's loans to Hong merchants for that matter--were illegal, they nevertheless were treated by both Qing officials and the American legal system as binding. With the collapse of the Cohong system in 1842, however, government oversight of the Hongs was lost, and with it, a certain amount of security for the trade.

Michael Block's short (nine pages) essay on the influence of the China trade on American exploration in the Pacific may have promise for further research, but the argument as presented is not convincing. Block examines the efforts of several Americans (including Commodore Thomas Jones--infamous for his 1842 attack on Monterey) to secure government interest in the Pacific territories for the purpose of conducting trade with China. Based on the (generally unsuccessful) efforts of the few individuals he highlights, Block concludes that China, not Manifest Destiny, was the magnet that drew Americans to the Pacific. This is an intriguing hypothesis to explore, but one that requires far more evidence than that presented here.

Shifting gears from the China trade, Isabel Morais examines early Macao through the eyes of Henrietta Hall Shuck, the first American female missionary in China. In 1835, Shuck arrived in Catholic Macao with her Protestant missionary husband. She was appalled by the wretched social conditions of girls and women, and determined to improve their lot through education. She opened a school in her home, and at one time had more than thirty students in attendance. The school closed in 1842, however, when the Shucks left Macao for Hong Kong, where two years later, Henrietta died. Morais admits that Shuck was not a great success story. Still, her writings provide access into prevalent attitudes of the time. For example, her passion for missionary work included a fierce strain of anti-Catholicism, and her inherent sense of Western superiority made acceptable the subjugation of "inferior" peoples. Morais concludes that Shuck was a product of her time, and her attitudes must have suffused early Macao society.

Susan Schopp picks up where Morais leaves off, examining the changing attitudes of five women who lived in Macao and China from the 1830s to the 1940s. Through vignettes of each woman, Schopp argues that American appreciation for Chinese people and engagement in the society and culture improved through the decades as intolerance and Western chauvinism declined. While there may be substance to this argument, surely there exists numerous counterexamples of Western pioneer women in China who were captivated by and tolerant of the Chinese and their culture, and other American women living in a more modern China who held as strongly to Western superiority as Shuck.

The last essay in this collection is again a series of vignettes, but more grounded in the overarching theme of Americans and Macao. Vincent Wai-kit Ho introduces five American consuls (in ten pages) who served in Macao from 1849 to 1869. The accounts are bare-boned, describing mainly the inability of consuls to effectively carry out directives in a region of conflicting jurisdictions, and complaints about inadequate salary. As Ho points out, circumstances in Macao took a turn for the worse after the opening of the Treaty Ports. Macao's trade, and consequently its significance, declined to the point where the post was left vacant after the last American consul resigned in 1869. Ho has not much to add by way of conclusion. The glory days of Macao were over--at least for the immediate future.

In sum, the strength of Americans and Macao is found in the three essays addressing early American trade in China, smuggling on the Pearl River, and merchant debt with the Cohong. The other essays shed only limited light on Macao and American attitudes toward China. And therein lies the weakness of this work.