Tracy and Rangow, eds., Religion and the Early Modern State: Views from China, Russia, and the West, 2003.

There are competing historiographies concerning the English Reformation. The traditional approach, emphasizing 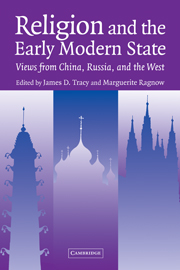 political history, sees the development of Protestantism in England as an official act of state, characterized by rapid change from top down. A different emphasis, one emerging around the 1980s, has focused on how Protestantism was adopted (and at the same time resisted) by the common folk, thus muddying the traditional narrative by arguing that religious change was gradual from bottom up. So far, apparently, there has not been a successful synthesis of these two approaches. The stated aim of Religion and the Early Modern State, a collection of thirteen essays plus an introduction, the fruition of the May 1998 "State Religion and Folk Belief in the Early Modern World" conference held at the University of Minnesota, is to bring together these divergent historiographies on the English Reformation.

The approach taken is a complex one, as questions concerning modern religious development are addressed in this volume from a global perspective. The intent is for readers to gain insight on the dynamics of the English Reformation by drawing on lessons pertaining to religious change and continuity that occurred around the same time in Western Europe, Russia, and China. The work is divided into three sections: "Lived Religion and Official Religion," exploring the tension between public religion and private practice; "Forms of Religious Identity," analyzing how group identity is forged out of religion and its accompanying rituals; and "The Social Articulation of Belief," focusing on how the social context shapes religious identity.

The end of each section features an essay that specifically focuses on the English Reformation, but more could have been done to construct the parts into a whole. Despite the thematic approach (and some attempts at integration by occasional references to other essays in the book), each chapter stands alone. The epilogue, "Popular Religion and the Reformation in England: A View from Cornwall" by Nicholas Orme, also focuses on Protestant England, but it would have been more useful to have ended with a summary that makes some tentative conclusions on how religious experiences in Holland, France, Spain, Germany, Russia, Ukraine, and China specifically contribute to the debate concerning the historiography of the English Reformation. Most essays draw from archival sources and are well written; however, the reading is dry in places and not intended for a general audience.

Part 1, offering examples of conflict between official religion and lived religion, begins with Richard Shek's overview ("The Alternative Moral Universe of Religious Dissenters in Ming-Qing China") of the Chinese "Eternal Mother sects," which were occasionally at odds with the three "official" religions (Confucianism, Taoism, and Buddhism) that served to reinforce political order and patriarchy. This is followed by "Ecclesiastical Elites and Popular Belief and Practice in Seventeenth-Century Russia" by Robert O. Crummey, which provides an analysis of the controversy surrounding the liturgical reforms of the Russian Orthodox Church that led to the Old Believers split. Another essay, "The State, the Churches, Sociability, and Folk Belief in the Seventeenth-Century Dutch Republic" by Willem Frijhoff, focuses on the different motives (magistrates versus church officials) in support of the Dutch Reformed Church as a "public church." Finally, this section ends with Caroline Litzenberger's essay--"Communal Ritual, Concealed Belief: Layers of Response to the Regulation of Ritual in Reformation England"--on how the Anglican reforms at the top, to rid worship spaces of Catholic vestiges, were less than zealously carried out at the diocese level. The discerning reader will note, despite the diverse settings in terms of geography and theology, commonalities of social dynamics in which lived religion was at odds with official religion. To cite one parallel, in both Russia and China the religious minorities embraced apocalyptic eschatology.

Part 2 turns to collective worship experience of certain religious minorities, again by looking at examples in China ("Spirits of the Penumbra: Deities Worshipped in More Than One Chinese Pantheon" by Romeyn Taylor) and of Eastern Orthodoxy ("Orthodoxy and Revolt: TheRole of Religion in Seventeenth-Century Ukrainian Uprising against the Polish-Lithuanian Commonwealth" by Frank E. Sysyn). The Western European example of this section is that of French Protestants in Raymond A. Mentzer's contribution, "The Huguenot Minority in Early Modern France." Last, the Puritans fittingly provide a case study of a minority religious group in England in "State Religion and Puritan Resistance in Early Seventeen-Century England" by Paul S. Seaver. These studies provide examples of how religious minorities maintained their distinctiveness, and the necessary inward discipline, despite ongoing efforts at suppression by state and ecclesiastical authorities.

Part 3 covers "examples of how religious belief itself is shaped by being implanted in a given social context" (p. 7). In Russia, state and religious authorities determined to control and limit the proliferation of saints, but these efforts in certain cases had mixed success because individuals carrying out these reforms were divided due to competing Catholic and Protestant influences, as discussed in chapter 9, "False Miracles and Unattested Dead Bodies: Investigations into Popular Cults in Early Modern Russia," by Eve Levin. Susan C. Karant-Nunn shows in "Liturgical Rites: The Medium, the Message, the Messenger, and the Misunderstanding," that in Germany, Lutheran pastors desired to completely rid their churches of "papal remnants" and "superstitions" (such as the popular belief that leftover baptismal water has supernatural properties, useful for both humans and animals at warding evil), but members of the laity retained some of their folkish Catholic past. In Spain, according to Sara T. Nalle in "Self-Correction and Social Change in the Spanish Counter-Reformation," the Catholic Church was successful in implementing its Counter-Reformation, partially due to the willingness of individuals to accept official doctrine after being shown it was in harmony with their earlier Catholic catechism lessons (of which they had partially committed to memory). Finally, in England, Eamon Duffy argues in "The Disenchantment of Space: Salle Church and the Reformation," Anglican officials rid the church building of compartmentalized sections (such as family chapels for conducting mass for deceased relatives) and opened the worship area to make it one space, an effort to promote unity and exert greater control.

Religion and the Early Modern State is a book that specialists in religious studies (and perhaps ethnic studies) will find profitable to study. Its global perspective introduces a new way of approaching the English Reformation. The editors state, "The premise of this volume is that students of religious history in a given area can indeed gain perspective from the findings of colleagues working on what seem to be analogous problems in different parts of the globe" (p. 5). However, much of the task of integrating the findings of the various essays remains undone.