The first thing that needs to be said about Marina Svensson's book is that it is not a history of human rights in modern China. Nor 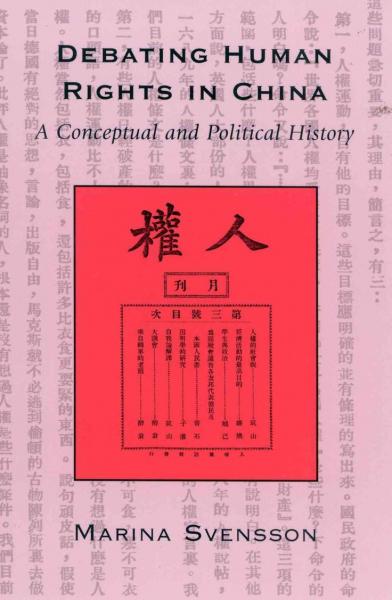 does it go into much detail about the state of human rights today: there are no numbers given about executions or political prisoners, no lists of the most common rights violations. Svensson, an assistant professor in the Department of East Asian Languages at Lund University in Sweden and a self-described rights activist, also is largely silent about foreign criticism of China's human rights record and touches only in passing on the subject of "human rights diplomacy." What she has written is a history of human rights discourse in China by Chinese since late Qing times. As such, this book is best described as a work of intellectual history.

Two themes--one stated, one implied--dominate Svensson's account. Her main concern is to show that the concept of human rights, although introduced from the West, is not incompatible with Chinese culture, and that Chinese activists repeatedly have used human rights language in their quest for a just society in the Middle Kingdom. The second theme, somewhat at variance with the first, is that rights talk has been employed throughout modern Chinese history as a weapon in political struggle.

Svensson begins with a general discussion of human rights and culture that develops into a strong attack on cultural relativism, which she later brands "moral nihilism" (p. 48). She refers to the "tyranny of culture" in human rights studies and argues that "culture often is understood and referred to in a much too static and ahistorical way" (p. 9). She particularly takes offence at the term "Asian values" and the tendency to refer to China's "Confucian" cultural heritage. The concept of Asian values ignores cultural diversity within Asia as well as communities that transcend national boundaries, such as women (p. 60). Furthermore, these Asian values never have been articulated specifically and are, Svensson says, "a thin disguise for authoritarianism" (p. 60).

Significantly, the concept of Asian values never really has taken root in Japan, Taiwan, or South Korea, all democratic states. As for Confucianism, she finds the idea that 2,000-year-old philosophical texts have a bearing on modern Chinese society to be "far-fetched" (p. 55). In the twentieth century, Confucianism and traditional Chinese culture were attacked from all sides of the political spectrum, so that today Marxism and Western liberal discourse are more familiar to many Chinese people than The Analects or The Doctrine of the Mean. Svensson contrasts Confucianism to Islam and Buddhism which, as living religions, do have a place in modern political discourse. She also directs scorn at Western scholars who, attracted to Confucianism's emphasis on duties and consensus while being unhappy with individualism and selfishness in the West, "romanticize a foreign society when facing problems in one's own" (p. 57). Because of the dubious relevance of classical Confucianism to current controversies, Svensson also is skeptical of efforts to search for an indigenous human rights tradition in the works of Confucius and his heirs.

In between her two chapters on culture, Svensson has inserted a section on the origin and evolution of human rights thinking in the West. Although the human rights ideal has achieved iconic status in the democratic world, Svensson notes that it is far from a monolithic concept and played "hardly any role in international politics up to the Second World War" (p. 25). Whether rights are "natural" and "innate" or bestowed by society; whether they are an end in themselves or serve a utilitarian function; whether some rights take priority over others; whether rights even exist as anything other than a moral notion--all these topics have been subject to debate in the West. Svensson finds all philosophical arguments for the existence of innate human rights to be unsatisfactory and quotes Thomas Haskell to the effect that "neither rights nor the practices they authorize need foundations sunk deep into the heart of nature" (p. 35). She never says "We hold these truths to be self-evident," but may just as well have.

Having set her sights on cultural relativism and provided an overview of human rights doctrine, Svensson then commences her account of the human rights debate in China, organizing her chapters in the conventional temporal divisions of modern Chinese history: pre-1911, the May Fourth Era, the Nanjing Decade, and so on. The period from about 1890 to 1920 is a particularly rich one in Chinese intellectual history as Western concepts ranging from democracy to German statism flooded into a country that desperately was seeking for ways to save itself from internal decay and foreign encroachment. The idea of human rights was explored and embraced by some, but so were nationalism and social Darwinism. From the beginning, the idea of human rights found itself fused with Chinese intellectuals' desire for a strong state. Many intellectuals squared this philosophical circle by arguing that a rights-conscious population was necessary to withstand foreign encroachment and build a powerful, modern state; yet the cause of human rights in China has been undermined consistently by leaders who have defined national strength in terms of state power.

While Svensson correctly emphasizes the enthusiasm with which Chinese intellectuals, obviously unhindered by Asian values or residual Confucianism, embraced human rights and other Western concepts, her second and more troubling theme now makes its appearance, that is the use of human rights as a political weapon. The first target was the Qing dynasty. Zou Rong, for example, in The Revolutionary Army made an emotional appeal to drive out the Manchus and restore human rights. But it is an odd sort of human rights advocate who would describe the Manchus as a barbarian and uncivilized people who oppressed "our cultured native land" as Zou did (p. 116). Sun Yat-sen, who was on the "strong state" side of the debate and thought the Chinese people enjoyed excessive freedom, also invoked human rights against the Qing. The Communists, who dismissed human rights as a bourgeois slogan, allied themselves with liberals in making human rights critiques of the Guomindang government during the 1930s and 1940s. The Guomindang, which had followed Sun Yat-sen in maintaining that the people had a duty to serve the state, officially embraced human rights toward the end of the Chinese civil war as a way of criticizing the Communists and firmly aligning itself with the United States and the "free world." Deng Xiaoping exploited the Democracy Wall movement of 1978-79 to consolidate his power base and push ahead his reforms. Most disturbing of all, since 1989 Beijing has appropriated human rights language and adopted pro-active policies to deflect human rights criticism.[1]

Within the relatively limited confines of intellectual history, Svensson succeeds admirably in showing that Chinese culture is not resistant to human rights. From the hope-filled enthusiasm of the 1890s through to 2001, she offers quotes from Chinese activists and reformers who not only embraced the concept of human rights, but embraced its most Western manifestation, that is the core political rights of freedom of speech, freedom of thought, freedom to publish, and freedom of association. Many also adopted the Western viewpoint that human rights, democracy, and the rule of law are an inseparable package, that human rights in an authoritarian state is a contradiction in terms.[2] It is particularly noteworthy, and encouraging, that appeals for human rights and democracy could bubble up in 1978 in a politically isolated country that had been ruled by a totalitarian Communist regime for almost thirty years. On the other hand, as Svensson indicates, human rights advocates always have been an embattled minority in China and their ability to influence the authorities and mobilize public support has been minimal. Towards the end of the book she says:

The majority of Chinese dissidents, or at least those known to and able to present their views in the Western media, are well-educated and urban-based elites whose lives and concerns are sometimes very remote from that of ordinary workers and peasants. And although they often address issues of concern to the two latter groups or seek contact with them, this is sometimes done in a paternalistic and condescending manner. (p. 311)

The same thing could be said about virtually all of the intellectuals quoted in this book. Which leads to a question: Can the culture issue--the Chinese people's supposed acceptance of authoritarianism and desire for order--be put aside if the bulk of the countervailing evidence comes from Western-influenced intellectuals? Furthermore, Svensson discusses the culture/rights issue in broadly thematic terms while avoiding the types of specific cultural behavior described by a writer such as Lucian Pye.[3] This is not to say Svensson is wrong, but that narrowly focusing on intellectuals is not a good way to make generalizations about the attitudes of the Chinese people.

The emphasis on intellectuals also makes for a fairly bloodless account of a dramatic and important topic. Svensson assumes the reader has a detailed knowledge of modern Chinese history and provides no information on the living conditions of workers or peasants and in what way their rights were violated or how conditions have or have not changed over the past century. The reader ends the book with no real grasp of the scope or toll of human rights violations. Even the intellectuals she quotes remain, for the most part, remote figures with few details provided about their personalities or relative influence. Li Dazhao, for example, is described as a founder of the CCP but his role as a translator of Marx and the man who introduced Marxism to Mao is ignored. A little color is not a sin in academic history.

These are minor criticisms, however. Marina Svensson has written a worthwhile book. Her research has been prodigious, particularly of Chinese intellectual journals. Her bibliography will be invaluable to researchers. She concludes by saying the current situation is "complex and somewhat contradictory" (p. 315). On one hand, the CCP has been forced to recognize the potency of human rights as a political issue and drop its former characterization of human rights as a bourgeois slogan and its contention that all rights have a class character. This is progress of a kind. On the other hand, Beijing has skillfully appropriated the rights issue by establishing human rights institutes and journals, signing human rights covenants and engaging in "dialogue" with foreign governments on the issue, all the while continuing to violate the rights of its citizens. It almost puts one in mind of Confucius, who said: "Fine words and an insinuating appearance are seldom associated with true virtue."[4]

[1]. A revealing account of the effectiveness of Chinese human rights diplomacy is contained in a recent article by Philip Baker. See "Human Rights, Europe and the People's Republic of China," China Quarterly, March 2002, pp.45-63.

[2]. In the book's foreword, Andrew J. Nathan makes the strange statement that Chinese thinkers had to consider "what kind of rights could one expect to enjoy under authoritarian government." Based on Svensson's account, most human rights proponents rejected authoritarianism and promoted democracy. This idea of accepting authoritarianism seems to be Nathan's own. See his "China: Getting Human Rights Right," The Washington Quarterly, Spring 1997, pp. 135-151, and reprinted in The China Reader: The Reform Era (New York: Vintage, 1999), pp. 407-415.