Elizabeth Sinn's book was reviewed for H-Empire by Mathew Brundage and is published here under Creative Commons license.
February 12, 2014
Print

Relocation and Reexamination: Hong Kong and the Pacific World

Purposely foregoing a regional approach in explaining the rise of Hong Kong from fishing village to global entrept in the latter half of the nineteenth century, in Pacific Crossing: California Gold, Chinese Migration, and the Making of Hong Kong, Elizabeth Sinn presents a 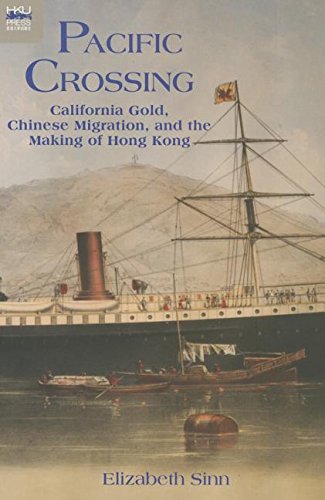 fascinating study of the in between place in which the British colony existed. While the role of Hong Kong in Pacific trade networks is the focus of the text, Sinn argues that the colony was not a central hub but rather the primary point of transition and mediation for people and goods moving through it rather than to or from it. She notes that Chinese emigrants to Gold Mountain regions were almost never from Hong Kong, but that the British possession was nearly always the point from which these travelers embarked and returned to China. She asserts that owing to fluctuations in laws, customs, and trade, Hong Kong found itself in an advantageous position in the movement of Chinese subjects--both alive and dead--and trade goods flowing back and forth across the Pacific. In addition to relocating the role of Hong Kong, Sinn also introduces the goal of reexamining the role of the Chinese people in the transitory processes that Hong Kong represented, not only as coolie laborers but also as integral actors in all aspects of trans-Pacific economic exchanges.

Sinn begins by outlining the origins of Hong Kong as the unintended beneficiary of new avenues of trade and transportation driven by the discovery of gold in California. She emphasizes that this rush served as a trigger for Hong Kongs emergence as the primary point of exchange for those traveling to and from the Pacific as a whole because of Hong Kongs lax emigration laws in comparison to the harsh penalties asserted by the Qing government. As such the colony became an invaluable hub for banking, mail, supplies, ship repair, and a host of other entrepreneurial activities related to these new economic needs.

Hong Kong served a role much like a frontier town, allowing for social mobility and identity fluidity in an arena of constant social and economic change, while providing the shared economic goals that brought together foreign and Chinese interests. In the second chapter Sinn illuminates the process of migration through Hong Kong, explaining who was involved in each step, why and how people made the journey from China to the Americas, and how public and private organizations responded to concerns that emerged in the debates over emigration from China. The text continues with an analysis of the creation of sailing routes to and from Hong Kong and San Francisco.  Over time successful innovation in navigation and propulsion--namely the use of steam ships--regularized and accelerated the trans-Pacific voyages carried out not just by American and British companies, but by Chinese and Hong Kong-based firms as well.

After establishing the means and the motives by which Hong Kong rose in importance in global economic currents, Sinn engages with the trade itself. In subsequent individual chapters she fills in historiographic gaps regarding Hong Kong as a source of trade material in the form of specie, quicksilver, flour, and even granite for utilization along the coast of California. She then examines the role of Hong Kong not only as a opium-processing locale for the China market, but also as a dominant exporter of opium for burgeoning consumption in California by Chinese expatriates and American laborers. The final two chapters analyze human bodies in different forms as products of economic exchange. The first looks at the emigration of Chinese women and the multiple systems that drove and restricted this influx. Sinn notes that a massive gender imbalance among Chinese men in the United States, coupled with the practice of selling daughters in Chinese society (mui tsai), drove concerns of both the British in Hong Kong and Americans in California that emigrant Chinese women were being forced into prostitution or slavery (p. 226). What resulted was a multifaceted and multiregional effort to restrict the emigration of Chinese women. Under the guise of restricting prostitution, the United States passed the Page Law, which specifically targeted Chinese women; the colonial government in Hong Kong enacted inspection regimes to confirm that these women traveled of their own accord; and private institutions, such as the Tung Wah Hospital, provided support in establishing certification of anti-kidnapping enforcement. Thus, the demand for correcting the gender imbalance among Chinese men in California and the continuation of the custom of mui tsai played into the exclusionist agenda emerging in the United States at this time as presenting an image of the Chinese as so dissimilar that they could never truly assimilate into American culture. Perhaps the most unique and contributory research Pacific Crossing provides is in the final chapter, which focuses on the practice of jianyun, or the repatriation of human remains (p. 265). Sinn explains how the Chinese cultural desire that the remains of the deceased be returned and buried in their home villages took advantage of the emerging cyclical nature of Pacific travel patterns. Local associations of Chinese in both Hong Kong and California created a system whereby enforcement of membership in the association was guaranteed by promises of identification of the deceased and their repatriation to China. The transmission and reception of these remains not only provided a lucrative and consistent source of high return transport income for shipping companies, but the associations garnered prestige within their communities for carrying out the long-term process of securing and ensuring proper burials. It was only in 1949, when political realities overrode the cultural processes, that the practice of jianyun between the United States and China ended.

By using geography as a lens through which to analyze the processes of trans-Pacific trade, Sinn identifies the procedural nature of the social, cultural, and economic drivers behind the China trade and Chinese migration both to and from the United States. Through Pacific Crossing, we see the role that Hong Kong and the Pacific trade played in the lives of people engaged in different facets of the Chinese diaspora in the mid-nineteenth century, from debates over transportation and the American fears of forced labor and prostitution among Chinese workers, to the engagement of Chinese and foreign businesses to profit from Chinese demands ranging from opium to remains repatriation. Historians who focus on transnational approaches, or who study broad concepts such as frontiers and borderlands, can use this work as a wonderful and engrossing example that not only analyzes patterns of migration and movement but also emphasizes the importance of understanding the places through which these people and things moved. Sinn provides an astounding array of statistics both in the text and in several appendices, but balances the sometimes overwhelming nature of these facts and figures with meticulously crafted case studies that contextualize the data within the larger narrative. One should note her impressive utilization of public and private archival sources on both sides of the Pacific in compiling the statistical variety as well as the details of the case studies. Sinns work should also be highlighted for its assertions regarding Chinese economic influence in the nineteenth century.

Historians such as Andre Gunder Frank  and Kenneth Pomeranz have somewhat recently made the argument that either by the cyclical nature of economics or by the environmental and geographic resources necessary for industrialized development, China fell economically behind Europe during the nineteenth and early twentieth centuries.[1] Without asserting that China maintained a particularly strong economic system relative to Europeans and Americans, Pacific Crossing shows how Chinese laborers and businessmen were integrated into a larger system not entirely controlled by one group or another, and how the demands of these actors carried a great deal of weight in influencing what was traded.

Sinn's work almost demands a follow-up study. While it is logical and prudent that the chronological range of the narrative terminates with the events of 1949, resulting in Hong Kongs end as a transitory location between China and the United States, the reader is left wondering how these formerly connected communities across the Pacific Ocean dealt with the political, social, and cultural disruption that ensued, and whether new avenues of interaction developed as a result.

Also, as Sinn attempts to more fully incorporate the role of non-laboring Chinese into the larger economic structures of the period, the structure of the book somewhat hinders this approach. Rather than explaining a process and fluidly moving between the different historical actors--Chinese and non-Chinese alike--Sinn often analyzes the roles of different interest groups under separate subheadings. While the use of case studies helps to bridge some of these divisions, by focusing on the different groups of actors based on their interests in the topic at hand, the construction of the narrative often establishes a binary of the Chinese doing one thing and foreigners doing another, creating the impression that the Chinese and foreigners were always reacting to the actions of one another instead of illustrating the instances where the interests of multiple groups fostered collaboration to address issues. Perhaps some of the layers of overlapping experiences, as Sinn describes them, could have been more permeable (p. 304).

Nevertheless, Pacific Crossing provides a valuable historical service in continuing the trend of relocating the relevance of Chinese and Chinese-Americans in American history beyond mining communities, railroad routes, and Chinatowns, while also reexamining the role of Chinese people in the related economic and legal systems of Hong Kong.

Sinn shows how Chinese workers, merchants, and business owners incorporated themselves in local issues and events in Hong Kong and California, as well as into the larger streams of trans-Pacific trade. These interactions drove Pacific exchanges while influencing who engaged in the trade, how they traded, and what they traded, with Hong Kong as the beneficiary of this new contact from its place in between China and California.