Silbey, The Boxer Rebellion and the Great Game in China, 2012

The Boxer Rebellion and the Great Game in China

In early December 1899, the American minister in China, E. H. Conger, received a breathless and terrifying 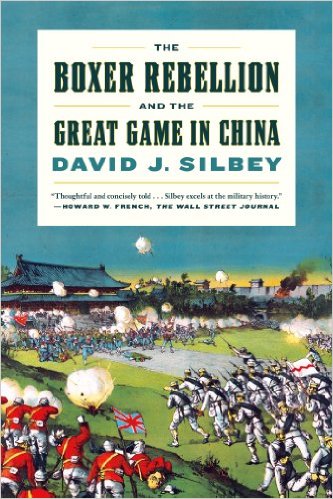 telegram in Peking from an American missionary in the interior of the country, warning him, "Boxer rebellion ... rapidly spreading; pillage, arson, murders increasing; avowed object kill Christians exterminate foreigners ... consider situation almost hopeless."[1] The rebellion had in fact been raging for weeks already, and it continued to grow in intensity and scale as peasants looted, pillaged, and murdered a swath across northern China with the government, the Qing dynasty, unable and unwilling to stop it. The Boxers, so-called because of their practice of martial arts, soon laid siege to the foreign compounds at Tientsin and Peking, housing hundreds of foreigners and thousands of Chinese Christians. In many instances, they combined with Qing imperial forces in pitched battle against European forces hastily cobbled together to resist them. The rebellion spread like a grass fire and Western observers described in shocked terms the spectacle of thousands upon thousands of Chinese peasants-cum-Boxers chanting "Kill!, Kill!" in a seemingly trance-like state, and convinced of their own invulnerability to modern weapons. It was, as one observer recorded at the time, "the countryside in arms against the foreigner."[2]

The response from the West was swift, coordinated, and ambitious. By late summer 1900, an eight-nation alliance consisting of Great Britain, Russia, Japan, France, Italy, Austria, Germany, and the United States had landed an army of more than fifty thousand troops on Chinese soil. The once-mighty Chinese state suffered the indignity of a multilateral, imperial occupation lasting for roughly the next year as the rebellion was crushed, order restored, and the teetering Qing dynasty preserved. Ultimately, the Western powers signed the punitive Boxer Protocol imposing a costly defeat on China while preserving, at least for a time, the imperial status quo.

These dramatic events served as the backdrop for arguably the most significant imperial contest of the late nineteenth century with important implications for the century to come. For more than six decades, these same states, in varying degrees, had been, to use a phrase commonly used to describe the process by Europeans, "carving China like a melon," in more-or-less typical imperial fashion. Each nation harbored its own imperial ambitions regarding China and the latter had been badly and intentionally weakened over the preceding decades so that it was no longer in a position to resist foreign domination. By the latter years of the century, the Qing dynasty--China's last--was increasingly hide-bound and paralyzed, the state was in dire need of massive reform, and the people had grown increasingly restless. These conditions made for a volatile cocktail that was both opportune and very dangerous for the competing imperial powers.

Military historian David J. Silbey's book, The Boxer Rebellion and the Great Game in China, offers a much-needed and fresh telling of this series of events. The author ably captures the drama and feel of the period with deft and stylish writing that yields insights into key events and personalities, and also into the so-called great game of empire amid the struggle between modern and barbaric, between old and new. At the center of this great global contest stood China with its seemingly limitless resources and manpower alongside its also seemingly intractable backwardness and decay. Silbey does a splendid job in laying out the particular ambitions of the great powers (including the newly arrived ones, such as Japan and the United States) as they ran up against a crumbling dynasty and a restless and long-suffering people not willing to watch their nation be so easily turned into the next laboratory for the West's great colonial experiment.

As the popular uprising commonly termed the Boxer Rebellion spread rapidly across north China in 1899-1900, the Western military response was haphazard, at best. This is not at all surprising as not a lot was known about the interior of China and the Western powers did not take such matters all that seriously. Why should they have? These foreign powers had been basically doing as they pleased for decades now in China and had even managed to coerce the state into signing off on what are generally viewed as gross violations of Chinese sovereignty in the unequal treaties. The Chinese were in no position to defend against the vastly superior Western forces.

However, as Silbey shows, the Boxers were more capable than they have been given credit for by their contemporaries and by historians. The evidence suggests that the Boxers learned from their engagements with both the Chinese imperial and Western forces, that they planned well their ambushes and attacks, and that they adapted in an attempt to account for far inferior weapons. Rather than a rag-tag band of "crazed religious fanatics," a widely held view, these fighters demonstrated sophistication in combat again and again. As Silbey writes, "limited as they were by their weaponry, two different groups of Boxers had managed successful attacks, and not just against missionaries or railway engineers but against armed and trained soldiers" (pp. 68-72).

While the Boxers continued to adapt tactically, they also continued to benefit from Western ignorance, arrogance, and general lack of coordination. For while a Chinese victory against the West was never really a possibility, the Chinese state did hope to stall for time; co-opt the powerful energy of the popular rebellion; and exploit the imperial rivalries and divisions among and between the Western powers, if only to postpone the inevitable. It took time for the Western nations to figure out that they would need to commit much more resources to the effort than they had imagined at the outset. They had been disdainful of the fighting capacity of the Chinese--and not wrongly so given the record of the previous handful of decades. As it turned out, they had been mistaken. Western leaders, and not just British General Edward Seymour, had committed error upon error and narrowly escaped some large disasters.

Silbey recounts all this in a shrewd and fair-minded way. Necessarily, he credits the Boxers with being far more formidable fighters than we have previously understood, and his study restores a sense of balance of forces that contemporaries understood at the time. However, and this is merely a quibble, this argument comes close to overreaching in its suggestion that the Boxer defeat rests on intangible factors and not on Western economic and technological supremacy. The whole affair, in my view, should not be understood as a very narrow miss for the Western powers. Even if Seymour had failed and been completely routed, for example, could that have resulted in a Chinese victory in the larger sense of restoring their sovereignty? Not likely. Silbey is somewhat ambivalent here, suggesting only that "the Chinese could never fully take advantage of those moments of vulnerability" (p. 232). He is no doubt correct. But there is a reason that the Chinese could never have mounted a successful defense against the Western powers. And there are reasons that despite tactical errors, poor planning, lack of coordination, and serious imperial divisions, the West nevertheless triumphed. For the next several decades, the West, now including Japan, continued to deal with China as a plaything, dividing up its territory, handing out spoils to shore up more important relationships, and ignoring the desires and needs of the Chinese. In short, the great game of exploiting China continued as the Qing state collapsed and the nation drifted toward civil war.