Shen, Mao, Stalin and the Korean War: Trilateral Communist Relations in the 1950s, 2012

Zhihua Shen’s book was reviewed by Kathryn Weathersby for the H-Diplo discussion list in April 2013. It is reproduced here under Creative Commons license.

The Korean War in the Context of Sino-Soviet Relations

The publication of Shen Zhihua's Mao, Stalin and the Korean War marks a significant advance in English-language literature on the Korean 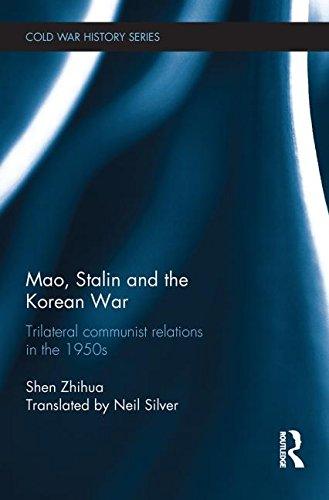 \War. A Russia specialist, Shen has long been China's leading historian of the Korean War, tirelessly pioneering research into Chinese archival documents and making the abundant declassified Russian documents available in Chinese translation. The original 2003 version of this book was a sensation in China as the first non-propagandistic, scholarly account of this pivotal event in the history of the People's Republic of China (PRC). Former State Department officer Neil Silver has done a great service to English-speaking readers by painstakingly translating and adapting this important work.

Shen investigates two central questions about the war: why Stalin decided to support a North Korean attack on South Korea in 1950 and why the Chinese leadership decided to enter the war in October 1950. Unlike most English-language accounts of the war, which examine its outbreak in terms of the Soviet/American conflict, Shen places Stalin's decisions regarding Korea in the context of his rapidly changing relations with the Chinese Communist leadership. Drawing on both Chinese and Russian sources, Shen charts Stalin's ambivalent approach to the Chinese party from 1945 to the end of 1949. He argues that the Soviet leader was determined to maintain the territorial gains in the Far East which he had secured through the Yalta system, which were contingent on his conclusion of a treaty with the Nationalist government. He therefore supported his Chinese comrades only sporadically. For the same reason, throughout this period he maintained a defensive position in regard to a divided Korea. The decision to establish an alliance with the PRC, made in early January 1950, fundamentally changed the equation. In negotiating the terms of the alliance treaty, the Chinese leadership held firm to their demand that the Soviet Union relinquish control of its important assets in Manchuria, the Russian-built Changchun railroad and the ports of Lushun and Dalian at its terminus that provided Moscow its only ice-free access to the Pacific. To compensate for the loss of these strategically essential holdings, Stalin backed Kim Il Sung's assault on South Korea, since control of the entire peninsula by the much more tractable North Koreans would assure Moscow access to the ports of Pusan and Inchon.

Shen's analysis of the impact of the Sino-Soviet alliance on Soviet policy toward Korea enriches our understanding of the reasons Stalin took the risky step of invading the Republic of Korea. However, Shen surprisingly omits discussion of NSC-48, the American strategic strategy for East Asia adopted in late December 1949 in response to the establishment of the People's Republic of China. In this new policy, the United States prioritized its goals in the region given the limited military resources it retained after postwar demobilization. Thus, it committed itself to the defense of Japan, the Philippines, and the small islands to the east that had been taken from Japan at the end of the war. Territories to the west, including Korea and Taiwan, lay outside the new defense perimeter.

I have argued that Stalin learned immediately of the substance of NSC-48, most likely from Donald McLean, his highly placed British spy in Washington, and that knowledge of this policy led Stalin to conclude that the United States would not intervene to protect South Korea. A record of Stalin's conversations with Kim Il Sung in April 1950 quoted by Russian scholars Evgenii Bazhanov and Natalia Bazhanova, but not included in Shen's account, reveals that the Soviet leader explained to his Korean protege that it was now possible to assist him in his military campaign against the South because of the victory of the Chinese Communists and the disinclination of the Americans to intervene in Korea. Nonetheless, Stalin cautioned that they must proceed carefully because the danger of American intervention remained. He thus informed the North Korean leader that if the Korean People's Army needed reinforcements, he would have to turn to China; Soviet troops will not be sent to Korea.[1] Shen's analysis broadens our understanding of the impact of the establishment of the PRC on Stalin's policy toward Korea, but it does not fully explain the decision for war. However much Stalin may have desired new ports on the Pacific, he would not have authorized the attack on South Korea unless he calculated that it would not lead to conflict with the United States.

Shen's careful examination of his second question, which is based on newly available Chinese sources as well as the Russian documents released in the 1990s, provides a much fuller picture of Beijing's decision to intervene than scholars have previously been able to construct. Departing from the interpretation of the Chinese-American historian Chen Jian, who argues that Mao's decision to intervene was primarily driven by a desire to maintain revolutionary momentum within the PRC, Shen concludes that security concerns were paramount.[2]

Since China had barely begun to build an air force, it needed Soviet air cover to protect both its troops entering Korea and its rear areas in Manchuria from devastating American air attacks. Shen documents in detail Beijing's intense negotiations with Stalin over this issue. In the end, fearing that Soviet air involvement in Korea would lead to all-out war with the United States, the Soviet leader stalled for time, claiming that it would take two to two-and-a-half months for any of the numerous Soviet air assets deployed in the Far East to transfer to Manchuria. Since this timetable would be too late to prevent a North Korean defeat, the Chinese leadership agreed with Stalin's instructions to Kim Il Sung to evacuate his remaining forces to Manchuria and the Soviet Far East.

At this point, however, Mao Zedong feared that a North Korean defeat would transfer the war to northeast China. Although the Sino/Soviet alliance would force the Soviet Union to support China in this war, the outcome would be a loss of northeast China either to Moscow or the Americans. Shen notes that after Stalin sent the Red Army into Manchuria in 1945 to defeat Japanese troops, he was able to force Chiang Kai-shek to sign a treaty that harmed China's interests. Moreover, the PRC had secured the return of the Changchun Railway, Lushun, and Dalian only through very tough negotiations, like "taking meat out of a tiger's mouth" (p. 176). Thus, to forestall loss of sovereignty to either great power, Mao decided to send troops to Korea even without Soviet air cover.

In a final twist, once Chinese forces successfully engaged the far better equipped American troops on October 25,1950, Stalin at last decided that he could trust his Chinese allies. As is well known, the Soviet leader had long doubted that Mao was a real Communist and feared that he would follow the path of the independent Yugoslav leader Marshall Tito. But just one week after the Chinese "Volunteers" proved their mettle against the Americans, the Soviet air force entered the war, albeit only in the rear area. As Shen documents, both Mao Zedong and Zhou Enlai attributed Stalin's changed view of the Chinese Communist Party to China's entry into the Korean War.

As the newly harmonious allies saved North Korea from extinction, they also began a period of unprecedented cooperation. The Chinese understood that Soviet air units must limit their zone of operation to rear areas in order to avoid escalating the war. Soviet planes thus could not provide cover for Chinese ground troops, as Beijing had initially requested, but Mao did not ask for such assistance another time. Shen concludes that while the allies disagreed on various tactical issues, for the remainder of the war Stalin and Mao "were able to exchange opinions candidly, fostering the resolution of issues between them" (p. 182). Shen emphasizes that the Soviet Union met nearly all of China's requests for weapons and supplies, materiel which it could not obtain anywhere else. Moscow sent torpedo boats, floating mines, armored ships, small patrol boats, mine-sweeping equipment, and coastal artillery, in the process creating the PRC's navy. The Soviet Union also provided air combat advisers to train Chinese pilots, as well as donating its new jet-powered fighter, the MiG-15. The month before armistice negotiations began in June 1951, Mao requested that the Soviet Union supply sixty divisions of ground forces, an amount that exceeded Moscow's immediate capacities. In the end, the Soviet Union agreed to supply sixteen divisions during 1951 and the remaining forty-four by 1954. By the end of the war, fifty-six divisions had been re-equipped with Soviet arms. Moscow also provided anti-aircraft artillery for 101 battalions as well as artillery for two rocket divisions, fourteen howitzer divisions, two anti-tank divisions, four searchlight regiments, one radar regiment, and eight independent radar battalions. Twenty-eight engineering regiments were supplied with Soviet construction equipment, as well as ten railroad divisions.

The cooperation from Moscow that flowed from China's performance in the Korean War extended to economic development as well. Shen writes that the volume of Sino-Soviet trade increased nine-fold in the first year of the war, from $26,300,000 in 1949 to $241,900,000 in 1950 (p. 191). The Soviet Union sold to China, at discounted prices, equipment for mining, transportation, energy production, metal rolling, and milling, as well as oil and finished steel. Moscow also sent a large number of technicians to China and welcomed large numbers of Chinese as students in Soviet institutions. This close cooperation ended abruptly with the Sino-Soviet split in 1960, but as Shen emphasizes, while it lasted it "played a major role in China's economic revival" (p.191).

Neil Silver's highly readable translation of Shen Zhihua's book includes a useful introductory essay by Yang Kuisong of Beijing University, who takes issue with some of Shen's conclusions regarding Stalin's motives for starting the war. With regard to China's decision to intervene, however, Yang concludes that Shen's account is "convincing, logical, dramatic, and on target" (p. 16). Indeed, this path-breaking book is both fascinating and essential reading for all scholars interested in the recent history of Northeast Asia.

[1]. Kathryn Weathersby, "Should We Fear This? Stalin and the Danger of War with America," Working Paper No. 39, Cold War International History Project (Washington DC: Woodrow Wilson International Center for Scholars, 2002).