The USC U.S. - China Institute, Japan Society New York, and National Consortium for Teaching about Asia (NCTA) are offering a complimentary one-day workshop for K-12 educators to look at how Japanese politics, economics, society and culture changed from the 19th into the mid-20th centuries. 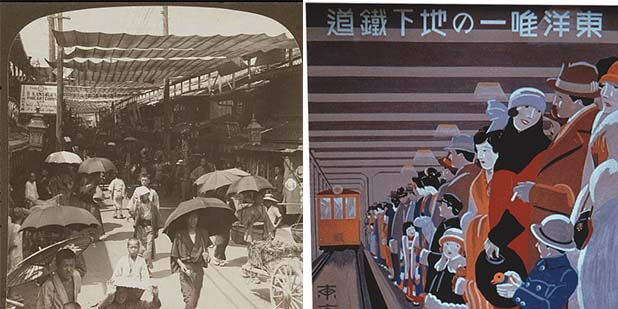 Japan already had large urban centers and vibrant trade at the time of the 1868 Meiji Restoration, but economic and other changes accelerated with the change in government. The country ended its existing class system, expanded education, built a strong industrial base, built a modern military, and seized colonial holdings. War and depression fed dislocation and grievances, trends towards cultural diversity and democratization competed with other forces. In this workshop, we’ll look at how Japanese politics, economics, society and culture changed from the 19th into the mid-20th centuries.

Professor Morgan Pitelka teaches history and Asian studies at the University of North Carolina at Chapel Hill. He also serves as the Chair of the Department of Asian Studies and specializes in the history of late medieval and early modern Japan, with a focus on the samurai, tea culture, ceramics, cities, and material culture.

Professor Takeda Tomoki 武田知己 teaches Japanese history and political science at the Daito Bunka University in Japan. His focus is on Japan’s international relations and he has edited seven books, including ones on foreign relations and the history of Japan’s political parties.

Professor Steven Wills teaches about Japanese history and popular culture and serves as department chair at Nebraska Wesleyan University. His research has focused on the rise of Tokyo since the 19th century. Among the topics he’s studied is the creation of firefighting capabilities and how the city coped with the devastating Kanto earthquake in 1923.

There is no cost to participate. Please register below by October 2. You will receive an email with the participation link.

Certificate of completion provided upon request.

There is another free workshop on October 24, 9-12pm PT, that focuses on Recovery and the Challenges of Success: Continuity and Change in Japan since 1945. Teachers are encouraged to sign up and attend both workshops, but are also welcome to just attend one.