Free Workshop - Recovery and the Challenges of Success: Continuity and Change in Japan since 1945 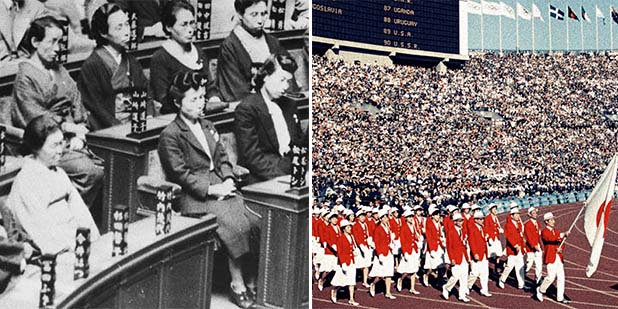 Left: Japan's first postwar election in 1946 was the first election where women could vote; Right: The Japanese Olympic team enters the National Stadium during the opening ceremony of the Tokyo Games on Oct. 10, 1964

Japan’s economic rise after World War II is well known and the country cemented its return to the global stage with the 1964 Tokyo Olympics and pop culture successes. In this K-12 educators' workshop we’ll look at the roles women played in transforming Japan and their place in contemporary Japanese society. What progress has been made? What challenges persist?  We’ll also look at Japan’s Olympics history (including the cancelled 1940 games and the postponed 2020 games). How and why do such events matter?

Prof. Elyssa Faison teaches modern Japanese history at the University of Oklahoma . Her research focused on women in changing Japan. She’s now looking at the legacy of the 1945 atomic bombings and the cold war that followed. Her first book was Managing Women, Disciplining Labor in Modern Japan. She’s now working on Atomic Memories: Legacies of the Cold War in Japan and the United States and using the story of Yamakawa Kikue to illuminate the social and political history of Japan from the late 19th century to the late 20th century.

Prof. Michael Strausz teaches Japanese politics at the Texas Christian University. His research focuses on Japanese politics, particularly Japan’s immigration policy, as well as the role of norms in international politics. He graduated from Michigan State University’s James Madison College and earned his Ph.D. in political science from the University of Washington in Seattle. He has written the book Help (Not) Wanted: Immigration Politics in Japan (SUNY Press).

There is no cost to participate. Please register below by October 23. You will receive an email with the Zoom link.