Denny Roy's book is reviewed by Lyle Goldstein and published by H-Diplo in February 2014. It is published here under Creative Commons license.
June 10, 2014
Print

Denny Roy's Return of the Dragon: Rising China and Regional Security represents a timely contribution to a growing debate among both 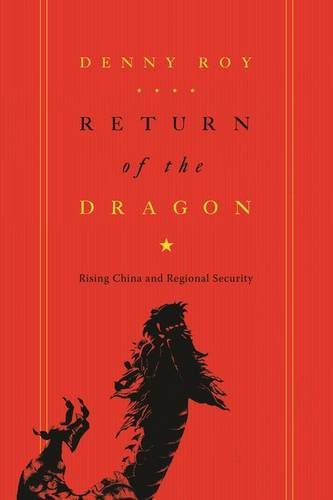 scholars and policymakers regarding China's rise and the strategic implications resulting from this tectonic change in world politics. Within the larger debate are the scholars who are anxious about China's rising power and those who do not believe that such anxiety is warranted. Roy quite clearly situates his work in the former group. He asserts emphatically: "I find rising China to be highly assertive in keeping with the expectations of offensive realism in the PRC's [People's Republic of China] immediate neighborhood" (pp. 7-8). Adopting an unapologetically zero-sum frame of analysis, he ultimately concludes that "China's growth into a great power or a regional hegemon will likely lead to a net reduction in security for most of the world" (p. 262).

Roy views Beijing's foreign policy as "either cynical or delusional" because of its claims to aspire to peace and cooperation, while simultaneously pursuing policies that he views as "domineering and in some cases aggressive" (p. 159). He describes a panoply of new and rising tensions along China's borders, from South Korea to Vietnam to India, that have resulted from increased "pressure on China's borders" (p. 103). Regarding recent China-Japan tensions, Roy writes that "China is highly under sensitive to Japan's China-related security worries" (p. 97). While this survey of emerging tensions around China's periphery seems at times to track rather closely with conventional wisdom, there are numerous instances of innovative analysis. For example, Roy's discussion of Chinese nationalism suggests that "the mass of nationalism that underpins support of assertive foreign policies is chosen by the Chinese people, not forced upon them." This leads him to conclude that "Chinese foreign policy ... would not change because of a democratization of China's system of government" (p. 171). This hypothesis may distinguish Roy's work from the more mainstream liberal theorizing about the "democratic peace" that has been quite pervasive in Washington foreign policy circles for decades.

Return of the Dragon is admirably succinct and well organized. The author demonstrates a clear fluency with Chinese culture, as in his sophisticated discussion of Deng Xiaoping's famous "twenty-four character strategy" that he summarizes and translates as "hide brightness, nurture obscurity" (p. 31). As Roy notes, this strategy is much debated among Beijing's foreign policy elites these days. And while the book certainly adopts a rather confrontational perspective toward China, there are also elements of balance in the text. For example, Roy asks why the Japan Coast Guard originally "targeted" Zhan Qixiong's trawler in September 2010 that eventually precipitated a major downturn in the crucial bilateral relationship between Tokyo and Beijing (p. 92). Similarly, he constructively debunks the persistent myth of a Chinese intelligence post on Burma's Great Coco Island.

Despite these commendable attributes, the book is nevertheless flawed in many respects. First, the array of sources that Roy employs does not approach a high standard for this academic subfield. Major journal articles and books in the field are generally ignored in favor of English news journalistic reporting. Most troubling, the use of actual Chinese-language sources to inform the analysis is sparse and those items that are cited tend to be quite dated. Second, Roy seems ignorant on certain key military aspects of evolving strategic dilemmas in the Asia-Pacific. For example, he greatly underestimates the military challenges facing China's submarine-launched nuclear armed missile capability and then mistakenly asserts that Japanese destroyers could alter the balance across the Taiwan Strait by shooting down Chinese ballistic missiles. Of course, these destroyers would be intensely vulnerable to the massive array of lethal weaponry that China has already deployed in the region--most clearly from China's enormous stockpile of anti-ship cruise missiles deployed from a wide array of platforms, including mobile, shore-based launchers that cannot be effectively targeted. Third, while some attention is made by the author to balance various perspectives, there is also a disturbing proclivity toward hyperbole in the text. In discussing the South China Sea situation, for example, Roy asks hypothetically: "If the PRC cordoned off the South China Sea to passage by American vessels ..." (p. 231), but there is little evidence to suggest that extreme scenario is likely except for some incidents with surveillance vessels. The analysis seems to border on paranoid when the author writes suspiciously: "If Chinese leaders secretly harbored the forcible domination of the world as their no. 1 goal, they would similarly begin by building up their wealth, productive capacity, access to vital resources, and technological prowess" (p. 19). Yet another problem with the text is the author's seeming tendency to rely on rumors to make a point as when he discusses an alleged January 2009 action by the Chinese Navy to force an Indian Navy "submarine to the surface." This alleged incident, which lacks any source citation in the text, was not confirmed by either side and is more likely to be the result of imaginative blogging and yet Roy concludes: "It was ironic and ominous that such an incident could result from a Chinese military operation that the international community saw as constructive" (p. 114).

The above issues concerning sources, methods, and employment of evidence may be considered as relatively minor problems, but what about the substantive argumentation? Here, subjective political perspectives may determine a reader's reaction. To be sure, "hawks" in the unfolding China debate will find much to agree with in Roy's rather straightforward thesis. However, those advocating for increased engagement and compromise with a rising China will likely be perturbed and find many points to object to. To raise one example, Roy offers many reasons why the United States and China "can't ... just get along" (p. 55). Given the failure of "appeasement" in the 1930s, he argues that "if America agreed to the concessions ..., China might keep asking for more.... Some great powers ... have seemingly open-ended ambitions" (p. 56). And yet Roy admits that twenty-first-century China is very different from Nazi Germany. Would Adolf Hitler have chosen to educate his child at Harvard University as Xi Jinping has done? China has not employed force on a large scale in more than three decades, and has a record of pursuing effective territorial compromises on its border. Most important, to return to the well-worn and truly strained "Munich analogy," the United States is far more powerful relative to China than was Britain relative to Germany. From a position of great strength, Washington can and should take some risks for peace. Roy's employment of the "Munich analogy" is hardly unprecedented, but is still inappropriate as it amounts to an intellectual cudgel too frequently deployed in foreign policy discourse against any suggestion of compromise--the very lifeblood of effective diplomacy.

Perhaps the biggest problem with the book is that it does not even attempt to define the solution to the problem that it outlines in considerable detail. Somewhat shockingly, it is completely devoid of any kind of actual policy recommendations. The customary defense of such an approach in academic writing is that the given book sets out to define the salient processes and trends in the regions--and quite purposefully avoids a discussion of remedies in order to maintain the integrity of the analysis. However, in this case, the failure to discuss actual policy solutions to the given strategic quandaries may represent a kind of intellectual deception. That is because if China represents the threat that Roy portrays, and if compromise is inadvisable, as he further suggests, then the costs of confronting China directly in areas directly proximate to this rising, nationalist power may be high indeed. First, there are the costs of extended rivalry. Beyond that, of course, are the nearly inestimable costs of military conflict if a war actually does come to pass. Then, there are the opportunity costs--cooperation that does not occur on climate change and myriad other vital issues. Unfortunately, none of these likely costs of U.S.-China rivalry are seriously discussed in this book.

In short, Roy's Return of the Dragon is a reasonably good summary of the troubling events unfolding in the Asia-Pacific region during the last several years. The intelligent argumentation, even if based on rather limited sources, lifts the bar for those arguing the "anxious" side of the China debate. Readers all around the Asia-Pacific and especially in Washington and Beijing should study this work carefully and reflect on what is said and what is not said.