Richard Nixon and Zhou Enlai, "Toasts at a Banquet Honoring the Premier," February 25, 1972

Banquet in the Great Hall of the People. The toasts were made shortly after 9 pm and were broadcast live via satellite to the United States.
February 25, 1972
Print 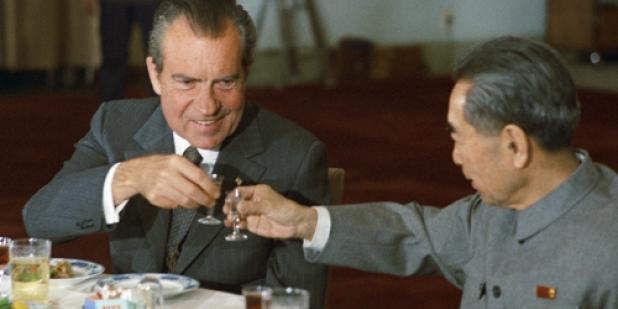 Mr. Prime Minister and our very distinguished guests from the People's Republic of China and the United States of America:
It is a great privilege while we are guests in your country to be able to welcome you and the Chinese who are present here as our guests this evening.

On behalf of Mrs. Nixon and all of the members of our official party, I want to express our deep appreciation for the boundless and gracious hospitality which you have extended to us.

As you know, it is the custom in our country that the members of the press have the right to speak for themselves and that no one in government can speak for them. But I am sure that all those from the American press who are here tonight will grant me the rare privilege of speaking for the press in extending their appreciation to you and your government for the many courtesies you have extended to them.

You have made it possible for the story of this historic visit to be read, seen, and heard by more people all over the world than on any previous occasion in history.

Yesterday, along with hundreds of millions of viewers on television, we saw what is truly one of the wonders of the world, the Great Wall. As I walked along the Wall, I thought of the sacrifices that went into building it; I thought of what it showed about the determination of the Chinese people to retain their independence throughout their long history; I thought about the fact that the Wall tells us that China has a great history and that the people who built this wonder of the world also have a great future.

The Great Wall is no longer a wall dividing China from the rest of the world, but it is a reminder of the fact that there are many walls still existing in the world which divide nations and peoples.

The Great Wall is also a reminder that for almost a generation there has been a wall between the People's Republic of China and the United States of America.

In these past 4 days we have begun the long process of removing that wall between us. We began our talks recognizing that we have great differences, but we are determined that those differences not prevent us from living together in peace.

You believe deeply in your system, and we believe just as deeply in our system. It is not our common beliefs that have brought us together here, but our common interests and our common hopes, the interest that each of us has to maintain our independence and the security of our peoples and the hope that each of us has to build a new world order in which nations and peoples with different systems and different values can live together in peace, respecting one another while disagreeing with one another, letting history rather than the battlefield be the judge of their different ideas.

Mr. Prime Minister, you have noted that the plane which brought us here is named the Spirit of '76. Just this week, we have celebrated in America the birth of George Washington, the Father of our Country, who led America to independence in our Revolution and served as our first President.

He bade farewell at the close of his term with these words to his countrymen: "Observe good faith and justice toward all nations. Cultivate peace and harmony with all."

It is in that spirit, the spirit of '76, that I ask you to rise and join me in a toast to Chairman Mao, to Premier Chou, to the people of our two countries, and to the hope of our children that peace and harmony can be the legacy of our generation to theirs.

Premier Zhou Enlai responded in Chinese. His remarks were translated by an interpreter as follows:

First of all, on behalf of all my Chinese colleagues here and in my own name, I would like to express appreciation to President and Mrs. Nixon for inviting us to this banquet.

The President and his party are leaving Peking tomorrow to visit southern parts of China. In the past few days President Nixon met with Chairman Mao Tse-tung and our two sides held a number of further talks in which we exchanged views on the normalization of relations between China and the United States and on other questions of concern to the two sides.

There exist great differences of principle between our two sides. Through earnest and frank discussions a clearer knowledge of each other's positions and stands has been gained. This has been beneficial to both sides.

The times are advancing and the world changing. We are deeply convinced that the strength of the people is powerful and that whatever zigzags and reverses there will be in the development of history, the general trend of the world is definitely towards light and not darkness.

It is the common desire of the Chinese and American peoples to enhance their mutual understanding and friendship and promote the normalization of relations between China and the United States. The Chinese Government and people will work unswervingly towards this goal.