Reeves, The Lone Flag -- Memoir of the British Consul in Macao during World War II, 2014

Augustine Meaher reviewed this book for the History of War discussion list in February 2016.

It's Really Absurd, the Position Too Silly: The Memoirs of Britain's Wartime Consul to Portuguese Macao

In the last decade, such works as Neill Lochery's Lisbon: War in the Shadows of the City of Light, 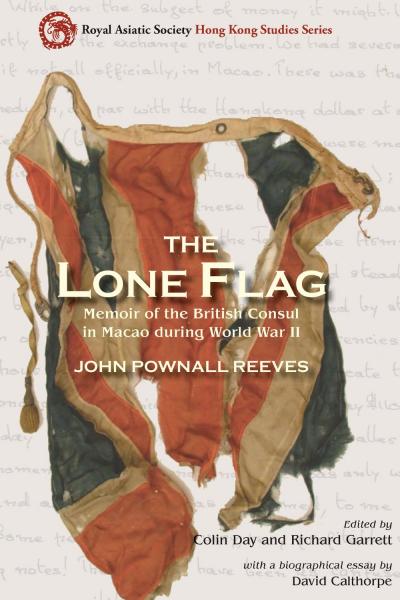 1939-1945 (2011) and Ronald Weber's The Lisbon Route: Entry and Escape in Nazi Europe (2011) have brought much-needed historical attention to the role of Portugal in the Second World War, as historians have begun to seriously investigate the effect of the war on neutral nations and the conduct of neutral nations in the war. Portuguese historians have largely focused on the war in the metropole and in Portuguese territories occupied during the war, such as Timor and the Azores. Macao, Portuguese since the sixteenth century,  has been in the shadow of its brasher and richer neighbor, Hong Kong, and placid compared to Portugal's African colonies and Timor. It has largely been overlooked by historians investigating the Second World War and the Portuguese Empire more broadly. Furthermore, scholarship exploring Macanese history is seldom available in English.

John Pownall Reeves's The Lone Flag: Memoir of the British Consul in Macao during World War II is thus a valuable addition to Asian and Portuguese historiography. It provides a priceless insight into wartime diplomacy in a neutral colonial possession. Initially written in 1946, the Foreign Office refused to permit the publication of Reeves's wartime memoir because publication would violate government policy. Publication in 1946 would not have simply violated Foreign Office policy but also would have brought unwanted attention to Britain's role in the Pearl River Delta as it tried to reassert its authority in Hong Kong in the face of Chinese Nationalist demands for its reversion, demands supported by the United States. Its publication would have also complicated Anglo-Portuguese relations as the United States was then demanding for Portugal to turn over various Axis assets in its possession against British advice.

The Royal Asiatic Society has done historians a great service by finding and publishing the memoir in a compact monograph that contains an excellent biographical essay by David Calthorpe, which provides much of the necessary background and biographical information about Reeves. Calthorpe's essay gives a human face to the narrator and makes Reeves's memoirs all the more engaging. The book is further enhanced by the reprinting of newspaper articles from the immediate postwar period that give further evidence of Reeves's importance in wartime Macao.

By early 1942, the British consulate in Macao was the only British diplomatic post between India and Australia. The war gave Macao a significance it had not held since Hong Kong was established and would never hold again. Portugal's neutrality in the Second World War required complex political and diplomatic maneuvering that necessitated ever-changing policies as the war progressed. Nowhere was the maneuvering more difficult than in Macao, surrounded as it was by Japanese-occupied territory with no hope of liberation for the duration of the war. Indeed, the creation of a consul in Macao was the direct result of the Sino-Japanese War, which had seen many British consuls in China displaced and many more British nationals turned into refugees.

The refugees were Reeves's main concern during the Pacific War. As the British consul, Reeves was responsible for the welfare of British, Dominion, and colonial subjects who found their way to Macao, often without even the clothes on their backs. Reeves was also responsible for many third country nationals whose claims to British protection were dubious at best. The consulate took on responsibility for aiding the huge number of Chinese displaced by the Sino-Japanese War.

The book also reveals that even when in a neutral colony surrounded by enemy troops, a British foreign service officer supported the war effort. This support involved assisting Allied servicemen who had escaped while ensuring that neutral and Allied assets, especially shipping assets, were not seized or sold to the Axis forces. This involved devious and duplicitous methods, which make for an engaging and entertaining read and reveal how perilous Reeves's position was in Macao.

As a micro-history, The Lone Flag is an excellent work for undergraduate and graduate students. It will serve general military, British, diplomatic, and Asian historians very well. The Royal Asiatic Society is to be congratulated for publishing such a valuable primary source and making it available to the wide audience it deserves. The Lone Flag highlights that the Second World War was truly a global war that seriously affected places as obscure as a Portuguese colonial backwater. However, The Lone Flag is more than a war memoir that explains the wartime tasks of an isolated foreign service officer. It also provides vivid insight into daily life in a neutral but isolated colonial outpost. The vignettes of a British official chasing and being chased by Japanese officials who were also enjoying Portuguese neutrality and the constant concern about food make clear the suffering the Second World War brought even to the neutrals.