Ma, Sounding the Modern Woman: The Songstress in Chinese Cinema (May 13, 2015)

This review of Jean Ma's book was written by Andrew Stuckey and published by the H-Asia discussion list. It's republished here by Creative Commons license.

Sound in general and music in particular have always been important factors in the cinema, even in the "silent" era. This fact is often obscured by the mimetic properties of the film camera. Nevertheless, the prevalence of live or recorded orchestral accompaniment to early screenings attests as much. The advent of sound technology to cinema brought with it, then, an intense focus on not sound precisely, but rather the human voice and its articulation with the photographic image of the human body 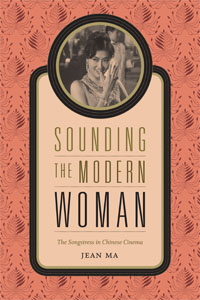 from which it appears to emanate (Michel Chion and Mary Ann Doane have analyzed this in detail).[1] Jean Ma's Sounding the Modern Woman makes the first sustained scholarly foray in English into historicizing this process in the Chinese cinema.

Tracing its roots in instances of mixing live, voiced performances with screened films and the use of pre-recorded sounds or music to be played at precise moments during screenings, Ma follows the transition to sound through the next few decades. In so doing, she joins other recent scholarship complicating, if not entirely upending, the standard historical periodization by highlighting one way in which the films produced between roughly 1925 and 1965 can be thought of as part of a continuous trajectory rather than sharply divided by discrete historical periods. Ma does this by focusing our attention on the nearly ubiquitous presence of singing in the three or four decades during and following the transition to sound film in China. More than this, though, she highlights the multiple valences of musicality and lyricality in the singing voice and its overwhelming articulation in the character of the songstress. Thus, she marks not only the embodiment of the human voice in its visual image on screen, but also its explicitly gendered nature in the singing woman as privileged site of song.

Sounding the Modern Woman is organized into five chapters, which are bookended by an introduction and very brief coda. In the introduction, Ma lays out the historical and theoretical underpinnings for the analyses she pursues in the following chapters. The five chapters, then, follow in a more or less chronological order the origins of the songstress in the Shanghai film industry of the 1920s and 1930s, the migration of much of this industry to Hong Kong beginning in the Second World War and continuing through the communist revolution, the further iterations of the songstress in Hong Kong Mandarin cinema as wildcat and then mambo girl, and finally, the unraveling of the songstress image in a return to the stereotype of the performing woman undone by love. The coda wraps things up with a quick reference to the go-go girl of the late 1960s, discussion of the displacement of the songstress by the martial arts hero, and mention of the few revivals of the songstress in later Hong Kong cinema.

One of the two great strengths of Ma's study, in this reader's opinion, is the way she marries close reading of particular films with extensive examination of archival materials such as newspaper advertisements and especially studio publicity materials. Thus, she is able to offer textual evidence of the ways the films themselves mark singing, in the tensions drawn between public and private performance, in the fascination with recording technologies and the possibilities they hold for the disarticulation of the voice from the body, in the shifting moral valences associated with countryside and city, and so on. At the same time, through the more strictly historical resources, Ma shows us the ways that a star system grew around these singing women, a certain internationalization (which Ma describes as cosmopolitan) visualized through images of traveling stars that is mirrored in the large overseas (principally Southeast Asian) markets for these films, and the ways the image of the singing woman was tied to glamorous images of a modernizing China. The intertwining of these approaches means that the close readings are without exception rigorously historicized in the twin senses of locating them in their own time as well as in a process of historical development.

Moreover, Ma stresses the ways that song in particular, through its musicality and the poetry of its lyrics but most of all in the ways it is "more presentational than representational" (p. 23), exceeds the ability of ideological and allegorical interpretations to fully account for the meanings generated through the singing voice. As a result, and this is the other great strength of Sounding the Modern Woman, she pursues a methodology privileging intertextual and intermedial connections between song and film, the record and film industries, cross-marketization so that songs and films promote each other, and interlinked star persona buttressed in simultaneous careers as singers and actresses. The media considered expand to include dance hall and night club culture, radio, the historical and geographical trajectory of musical and dance styles, print culture, and so on. The network of interlinked and overlapping connections that is revealed by means of this methodology is immensely complex and belies the simple historical or geographic divisions of leftist vs. commercial or Shanghai vs. Hong Kong. Nowhere is this more evident than in the numerous examples that Ma provides of songs from earlier periods and other contexts revived and re-performed--sometimes in translation--in films that mobilize the affective associations of that song but direct them in new and different directions. As Ma notes, this practice of reconstituting "golden oldie" songs continues even in contemporary films.

Nevertheless, no review is complete without some criticisms. I have three, two of which are quite minor. The historical scope of Sounding the Modern Woman is very much heavily weighted towards Hong Kong. The first chapter is concerned with the songstress in prewar Shanghai. The next chapter deals with the historical transition of the film industry from Shanghai to Hong Kong. The next three chapters and the coda are devoted to exploring the image of the songstress in Hong Kong's Mandarin cinema in the first decades after the war. Even if the figure of the songstress as such did not persist in the mainland or Taiwanese industries, issues of performativity that are intimately related with her do appear in the films produced in this period in those industries. It may be valuable for further research to build on these connections. Next, Ma makes a point on several occasions to stress the difference between singing in Chinese films and Hollywood musicals. I do not deny it, and I am in sympathy with the urge to resist an oversimplified and deracinating discourse of Western origin and Asian conformity. But Ma's own extremely careful historical research consistently points to the ways the Shanghai or Hong Kong industries are responding to, adapting from, and negotiating between Hollywood films (including American music and dance styles) and local cultural and social concerns. It seems to me that rather than point to a notion of a uniquely Chinese songstress it would be more fruitful to incorporate this complex cultural (and colonial) dialogue into the intermedia that are already at the center of this study.

Finally, Ma does excellent work showing the centrality of the singing woman, the songstress, to the process of articulating voice and body in the first decades of sound cinema in China. In point of fact, men almost never sing in these films, and when they do it is more likely than not to be as part of a duet with a woman. But what conclusions we are to draw from this observation remain ambiguous. It seems likely that in this period of rapid and traumatic modernization for China the centrality of singing women in cinematic conceptions of contemporary society is not accidental. Ma suggests these women "are invested with a high degree of affective and identificatory power, while simultaneously being shrouded in social opprobrium and marginalized within their fictive worlds" (p. 17). She suggests, that is, that the song itself and its articulation through and of a woman's voice allows a woman a space of her own beyond the manipulation of men (the composer, choreographer, or director). But this line of argument is never explicitly developed beyond this point, and the reader is left to draw her own ambivalent inferences.

All in all, Sounding the Modern Woman is well worth close attention. It advances our understanding of the connections between the Shanghai and Hong Kong film industries as well as enriches the historical discourse as it indicates many points of continuity over not only the transition to sound cinema but also the tumultuous war years and the Cold War situation that followed.