Lattimore, Pivot of Asia: Sinkiang and the Inner Asian Frontiers of China and Russia, 1950 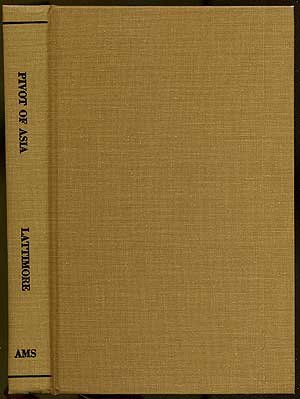 Central Eurasia and World History. Often seen as a geographer, the life of Owen Lattimore provides ample evidence that he was not confined by the limits of a single academic discipline, but was interdisciplinary and expansive in his thinking. However, Lattimore was grounded by his experiences as a China scholar and became a preeminent Mongol specialist during the course of his life, which spanned most of the twentieth century, and is reflective of a series of intellectual journeys that offers a valuable world history case study. An initial glimpse of Lattimore reveals that he lived through two world wars, revolutions in Russia, China, and countless other parts of the world, along with experiencing several eras during a long and well-traveled life that ended in 1989. Lattimore is probably best known for the ordeal he endured from the U.S. Senate, which he recounts in Ordeal by Slander, his book about his struggle in the United States during the loyalty-testing years of the McCarthy era in the 1950s.

However, this essay will not focus on Lattimore and Cold War struggles, elegantly handled in Robert P. Newman's Owen Lattimore and the Loss of China, but to Lattimore's relevance for the study of Central Asia in world history. Lattimore did not consider himself a world historian and the world history field was in its infancy during Lattimore's most productive period. Given that, where is the connection between the two?

A quick overview of world history as a field during Lattimore's most productive scholarly period, the 1920s through 1950s, finds that world history was not a defined field, but more a collection of historians and philosophers staking their claims on the nature of human societies and the results of encounters between civilizations and barbarians of one sort or another. Inclusive of this period, there are three general types of world history: in the first type we find notions of universal history associated with Oswald Spengler and Arnold Toynbee, the second type with the civilizational-based world histories of William McNeill and Leften Stavrianos, and third with the history of connections and interactions across boundaries and regions over long periods of time, which is an approach associated with the works of Marshall Hodgson, Fernand Braudel, K. N. Chaudhuri, and Janet Abu-Lughod. It is within this last framework that I am placing Owen Lattimore's perceptions on frontier history and its dynamic role in the history in Central Eurasia. This third type of world history can also be described as a process oriented world history of connective interactions related to societal developments based on inter-regional and intra-regional influences and the dynamic role that cross-cultural interconnections have on shaping human history.

Lattimore came to understand history as interactive connections very early in his intellectual journey. Among many conclusions possible, it is plausible to hypothesize that Lattimore soon realized the limitations of nation-state historical frameworks in favor of more dynamic cross-civilization configurations. A world historical framework was emerging for Lattimore without his arguing that such a framework was the intention of his research activity. For instance, in Lattimore's Manchuria: Cradle of Conflict, he suggests a world historical framework of analysis, but does not identify it as a world history framework. Lattimore wrote: "Previous experience on the borders of China and Inner Mongolia, and a long journey through Mongolia and Chinese Turkestan, had convinced me that a study of Manchuria must be essential to an understanding of the vast territory that lies between China and Russia."[1] In this book on Manchuria, Lattimore further asserted: "I have tried to build a study of the interacting migrations of peoples and cultures."[2] Thus, Lattimore was, during this formative period, developing a dynamic frontier zone framework of analysis. This realization is perhaps recognized in the types of work he published; works, which focused on cradles of conflict, desert roads, pivots of Asia, Mongol journeys and frontier studies: studies that ferried the reader on journeys through regions and about peoples moving across borders rather than studies focused on the life of single civilizations, or nation-states.

To fully understand the development of Owen Lattimore's ideas on Inner Asian and Chinese society, historically and otherwise, attention to his correspondence and travel diaries in conjunction with his published writings provide a broader and more complete image of his ideas about Eurasian, Inner Asian connections. Lattimore's travel diaries are attuned to nuances of behavior amongst Chinese and later Mongol caravan life, during his travels in the 1920s and 1930s, as well as his observations of stops along the way and other interactions he had in the frontier zones linking northern china to Central Eurasia. The diaries and correspondence from that period demonstrate Lattimore's insightful and instinctively well-developed abilities to observe and communicate in telling the story of the worlds he traveled.

Lattimore was always traveling and interacting with varieties of peoples around the world. He placed himself outside the traditional perceptions of civilization as the solitary foundation of values and culture; instead, he presented nomadic societies as a source of culture, a recognition that was usually reserved for the private club of civilizations. This places Lattimore's work and ideas in opposition to ethnocentric frameworks, and challenges Eurocentric as well as Sinocentric notions of Eurasian civilizations. This, it would appear, is reason enough to re-introduce Owen Lattimore and his work as useful topics of study for world historians.

The name Owen Lattimore is well known amongst Sinologists and Inner Asian specialists for good reason. On a superficial level, one scan of a fifteen-page bibliography listing Lattimore's publications makes it readily apparent that his major works on Inner Asia (Central Eurasia) and China were extensive. Lattimore published the majority of his work in the period from 1927-1950; this twenty-three year period was a very productive, worldview-establishing time. It is not without significance that with the exception of his collected papers, Lattimore's groundbreaking intellectual work was accomplished prior to the draining decade of the 1950s when he was forced to fight against McCarthy-inspired espionage allegations. Of Lattimore's publications, the following seven can be earmarked as the most important: The Desert Road to Turkestan (1928), High Tartary (1930), Inner Asian Frontiers of China (1940), Mongol Journeys (1941), Situation in Asia (1949), The Pivot of Asia: Sinkiang and the Inner Asian Frontiers of China and Russia (1950), and, Studies in Frontier History: Collected Papers, 1928-1958 (1962). These works were based upon field work, which Lattimore considered essential for historical scholarship. Indeed, Lattimore traveled extensively throughout his life, but it was his experiences from 1921-1950 that provided a foundation for his intellectual grounding, his worldview. The works cited above reflect Lattimore's perceptions on social and cultural relationships in Inner and East Asia and are framed by a history of connections and inter-relationships between and within regions in Eurasia.

"In first publishing this book [Inner Asian Frontiers] I emphasized an alternation between periods of continental and maritime development in the world history of the Old World. Prior to the Age of Columbus the most important activities in the long and slow evolution of civilized man were within the great landmasses of the Old World. It is true that the movement of people, the spread of trade, and the interaction of cultures by sea began in very ancient times; but all this was no more than a fringe of maritime activity. The main process of history was continental, and its phases in Asia, Africa, and Europe were not so sharply differentiated from each other as they have since come to seem in retrospect."[3]

Lattimore's approach recognized the interactive character of Afro-Eurasian history before it was fashionable and prior to Hodgson's work on inter-regional zones in Africa and Eurasia. Lattimore was not purporting to be a world historian, nor was he conscious of himself as taking a world historical approach in the sense of being a world historian. From his intellectual vantage point, however, Lattimore assumed that that cultures and societies dotting the Afro-Eurasian land and seascapes were part of an interconnected whole.

At the time of Lattimore's Inner Asian Frontiers, the field of world history did not exist as it does today at the beginning of the twenty-first century. There was no World History Association, no related regional affiliations, and certainly no Journal of World History. There were universal historians like Toynbee, and philosophers such as Spengler, who presented universal views of civilizations growing and decaying and encountering a variety of factors, but world history as a distinct field was embryonic when, in 1940, Lattimore published Inner Asian Frontiers.

In Inner Asian Frontiers, Lattimore placed Central Eurasia into the context of interactive cultural connections across the Old World ecumene. Andre Gunder Frank made the same observation in Centrality of Central Asia, when he asserted that "the trade and political relations between nomads and settlers across the 'Inner Asian Frontiers of China' were prominent in Owen Lattimore's classic."[4] Frank focused on the economic dimension of Lattimore's work and its relationship to the sinuous trade routes--popularly known as the Silk Road--which facilitated cultural development throughout Central Asia over a period of several thousand years. Lattimore's work applied narrow and broad-brush strokes that reflected his travels in localities and their greater regions.

Illuminating cross-border or cross-civilization contacts and influences are central to the work of world historians; it is also very much part of the work done by Lattimore. Much of Lattimore's work is framed by units of analysis that can best be described as "zones of interactions". Lattimore's understanding of these zones of interactions is nicely illustrated in Susan Whitfield's Life Along the Silk Road:

"To take the analogy further: if Central Asia is viewed as a great sea, then it is one containing numerous currents in complex interaction. The seawaters constantly erode the surrounding lands, making geographical changes on the fringes. Some of these changes have repercussions deeper inland, especially when floods bring in new material ? cultures, religions and ideas ? which wash away the old. At other times, the currents carry material over vast distances from one land to another and cause long-term changes to these places."[5]

In examining Lattimore's work, we can begin to explore the ways in which Central Asia under the Mongols served as the nexus of a Eurasian world-system that linked Asia together in the same fashion that Fernand Braudel revealed how the Mediterranean connected Europe within regional and world networks of trade and cultures. Therefore, let us dust off our copies of Lattimore and retrieve a work and worldview that is valuable for understanding the history of Central Asia within Eurasia and its relevance to the course of world history.