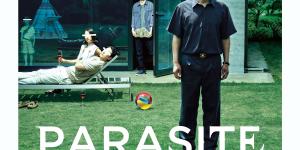 The movie Parasite is about the Kims, a family of four living in poverty in a basement.  They work together to manipulate situations setting up servants of a well to do family, the Parks, to get fired while setting themselves in the perfect position to take up the vacancies to work for the wealthy family as a tutoring, an art teacher, a chauffeur and a house keeper.  The movie has some comedy portrayed between the Kim siblings but it also shows love and support within the family structure. Despite their nonemployment situation, they work together to encourage and support each other.  It all shows the desperation families may feel when they are fighting to survive as well as the measures they are willing to take to move out of poverty and climb up the social ladder.

The movie not only shows the Kim’s willingness to manipulate and work together to get what they want, it also clearly defines the social class divisions among them and the wealthy Parks.  This movie has all the dynamics between the patriarchal family unit as well as among the servants and their masters and the aspirations, envy and materialism that people seek.

This movie is rated R and it would be inappropriate to have high school students view it in its entirety.  However, I could show different clips of the movie that show the two family’s dynamics, their lifestyle and their attitudes .  In doing so I could have the students compare and contrast the two families and their social classes.  After doing so, I would have them choose to compare and contrast the Korean culture and that of their own culture or that of America’s.  I would also have them discuss why they think the Parasite was chosen as the title which I would then carry over to a my final product of a stats math lesson.   Students would research and gather data of the different social classes in Korea and a their secondary culture where they would then present their findings in 3 different mathematical representations: a data table, a Two-Way-Frequency Table, and their choice of either a pie chart or a bar graph.

Compare and Contrast with Parasite

While I haven't seen this movie yet, my husband has, and loved it. As a film and theater undergrad, I think it is important to show our students influences from other cultures. Here we have the first foreign film win the Academy Award for Best Picture. I agree that a Rated R film isn't something I would show in class, but I rarely show movies anyway. I do show clips of things for ideas and starting assignments or lessons. I think comparing and contrasting Korean culture to our own version of American culture is a great assignment. This also shows a family working together when times are tough. How could they relate that to our current situations? Maybe some of our students' parents have lost their jobs or businesses due to Covid. What are the parralles that their families are doing with what the Kim's family did? For myself, I too, picked up an extra job as a tutor while my husband was laid off from his job due to closures. I think this could make some really interesting essays from my 8th graders especially. Now, I think I will go find this movie to watch!

I love your idea about comparing the experiences of the two families as examples of class awareness. It would also be beneficial to examine the title of the film and how it can be interpreted. Many students may feel that the poor family is considered parastic, while others (including myself) see the wealthy family as the parasite. The classroom discussion would be very interesting with high schoolers. It could be interesting to see how the students justify their opinions.

I finally saw "Parasite" last night and WOW, was it impactful to me.  Having just finished the course on Asian Design, but also having taken "The Two Koreas" in the summer, I was watching with both the lens of life in South Korea and the lens of living spaces and the gap between rich/poor and how societies address (or don't) the issue.  It blew my mind how some people live literally underground, though as my husband pointed out, people near us live under bridges, so...  I also found the family relationships to be interesting- the poor family really cooperates to try to improve their collective situation in a way we don't typically see in western films, although this might happen more in real life.  The rich family seems less cooperative but seems pretty normal to me for how I think rich people live... not having too much experience with that, LOL!

I teach Middle School, so I don't think I'd show this movie due to the violence, although I have shown rated R movies in the past with parent permission- movies like "Glory" that have a lot of war violence- but I don't think this would be appropriate. However, if I taught high school I could manage it.  My son saw Pulp Fiction and the Godfather and a whole bunch of very violent rated R films in his high school film classes, so it's definitely do-able.

Anyway, I really appreciate the creativity of this film and the way it mixes humor, drama, suspense, and just pure shock. I literally sat with my mouth gaping long enough that my daughter asked what was wrong with me.

Great points! I wonder what the original Korean title literally means and how successful "parasite" is as translation. I wonder what you make of the fact that both the employer and the Kim father dressed up as Native Americans in the end. I thought it was a way for the director to point to S. Korea's peripheral status in the US dominated global Cowboys and Indians game.