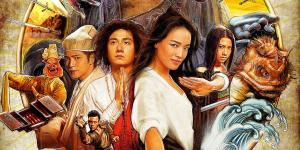 Conquering the Demons and The Demons Strike Back are Chow’s (current) two films that tell the story, Journey to the West. Conquering the Demons begins the adventures of Tang Sanzang as he assembles his fellowship of a pig demon, water buffalo and monkey king along his journey to hunt demons. And The Demons Strike Back continues these adventures as Tang struggles with his faith with more demons including Felicity along the way. The films are wrapped in Chow’s silly CGI and humorous moments, but something about this retelling felt as though it was never taught this way before. Compared to other retellings, this seems to be the most modern one which allows the story to be told with some modern elements such as religious doubt and vulnerability. I am usually accustomed to seeing the heroes of Journey to the West as invincible or near invincible when this films to a better job of humanizing them and perhaps making them more relatable for newer audiences to the story.