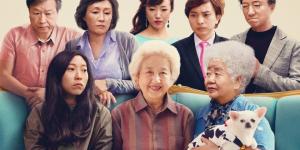 This is a film I have heard the guest lecturers discuss, other students mention, and my husband has talked about it as well. So naturally, I have been interested in watching it for a while now. One thing I love is that it is based on a true story-even one of the characters was the actual person in real life! This film not only displays Chinese culture, but it also shows the importance of family.

The Farewell is a 2019 Sundance Film Festival and Golden Globe winning film, among many other accolades. It was written and directed by Lulu Wang as a story she wrote about her grandmother's illness. The film opens by stating that it will about a big lie. The Chinese title is "Don't tell her." A unique attribute about this film is that it is a bilingual film as Wang is an immigrant living in the US but travels to China when her grandmother is diagnosed with cancer.

In the beginning of the film, we see the relationship "Billi" (Wang's character) has with her parents while they all live in New York and her close connection to her grandmother whom she talks on the phone with in China often. The grandmother's younger sister is seen at the doctor's office with the grandma and tells her she spoke with the doctors and everything looks good. Billi's parents later inform her that her grandmother actually has cancer and they are all keeping it a secret from her for her health. It seems that in Chinese culture, this is common according to one of the other doctors Billi speaks to. Her family has gone so far as to have Billi's cousin have a wedding so the family can all be together again in China before the grandma passes away.

Billi and her parents travel to China, being warned not to mention the illness to the grandmother and to act happy. Hiding her emotions is hard for Billi, but she is happy to spend time with her family and grandmother. The film takes us through the process of the grandmother helping plan this wedding and the family bonding over meals and stories. Billi lets her parents know she doesn't feel comfortable that everyone knows the grandmother is sick, but her. She is feeling conflicted over the Chinese cultural beliefs. Her uncle explains to her that they are all bearing the emotional burden for her, showing the differences between Chinese collectivism vs. Western individualist values. She later learns that not only do other families in China practice this, but her grandmother also told a similar lie to her husband when he was dying.

*Spoiler* The film ends with Billi's grandmother encouraging her to go back to the US and live her live and not focus on her failures. Billi ends up keeping the secret from her grandmother and in the end, we see that the real grandmother is still alive six years later! Maybe there is something to be said about not knowing?

I was touched by this film mainly because it reminded me of my own grandmother and how I felt losing her, but also because it showed me so much about the strength of family. I enjoyed seeing the cultural differences between Chinese families and that of my own American family. This story is a wonderful example of a personal narrative and my students have just completed their first personal narrative. This story takes places over the span of only 24 days, which is perfect for showing my students that stories can be about small moments or short periods of time. They could also compare their family cultures to the one in the film and see what differences they may have or commonalities they share. I am really glad I chose this film. I now realize why Awkwafina won the Golden Globe!