Ishikawa, The Formation of the Chinese Communist Party, 2013

Reviewed by David Buck for H-Asia and reproduced through Creative Commons license. 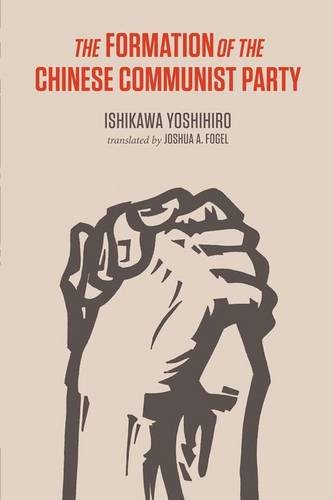 Ishikawa Yoshihiro's studies of the beginnings of the Chinese Communist Party concern a short three-year period, 1919-21. He begins in 1919 with the May Fourth Incident, the student-led protest against the Versailles Peace Treaty. That protest turned what had been a cultural reform movement into a political one because of the terms of the Versailles Treaty that gave German rights in Shandong to Japan. Popular anger in China arose because that grant continued imperialist rule in a part of China. Many Chinese felt Shandong should be returned to their control since China as well as Japan had supported the Allied side in World War I. This turn led some radical Chinese activists to look toward the newly founded Soviet Union as a model for a Chinese revolution. Ishikawa's research explores the documentary record of Marxist activities to discern how the Chinese Communist Party (CCP) came into existence. The book concludes in 1921 with the First National Congress of the Chinese Communist Party held in Shanghai in July and, somewhat anticlimactically, the deportation from Japan on grounds of his Communist political activities in late December 1921 of a Chinese student, Shi Cuntong.

Ishikawa's approach is based on careful textual study of documentary evidence in Chinese, Japanese, Russian, and English from these years. In an afterword, he describes his research technique as a comparable to archeology in that he carefully compared the documentary records in terms of content and time sequences with other available textual evidence and published historical accounts. He is wary of memoirs and later scholarly accounts, which he believes have introduced distortions and mistakes into the historical record. To cite one of Ishikawa's main conclusions, he believes that Soviet Union and the Comintern worked with Chen Duxiu and his Shanghai radical group to form the Chinese Communist Party (CCP) nine months before the first CCP congress. He concludes, "I would therefore assign the date of the CCP's formation to November 1920" and not the first congress held in Shanghai in July 1921(p. 206).

The work is divided into four chapters dealing with (1) the reception of Marxism in China; (2) the connections among the Soviet Union, the Comintern, and the Chinese Communist movement; (3) how the Chinese Communist Party as an organization came into being; and (4) the important first national Chinese Communist Party (CCP) congress in Shanghai during July 1921. A useful afterword explains many of Ishikawa's major points. Each chapter includes significant digressions from the main topic, including long discussions in chapter 3 of how Zhang Tailei became the Chinese delegate to the Third Comintern Congress held in Moscow. Chapter 4 discusses at great length the numbers and identities of the participants in the July 1921 first CCP congress in Shanghai. These interrupt the narrative flow and readers will find themselves referring back to earlier chapters to follow all the intricacies of Ishikawa's arguments

Ishikawa advances challenges to many interpretations accepted in the People's Republic of China. These are all points of contention over the historical record--of importance primarily to specialists in the early history of the Communist Party in China. This naturally is a field of major interest among historians in the People's Republic of China, but has not in the last twenty-five years received as much attention in foreign studies of twentieth-century China. Thus the book will be of greatest value for those already well grounded in the early history of Chinese Communism. For example, Ishikawa argues that Li Dazhao, although a true pioneer of Marxism in China, was not an important translator of Marxist works into Chinese. Li Dazhao was long believed to have written articles about Marxism under the pen name "Yuanquan," but Ishikawa and Chinese scholars have discovered that Yuanquan actually was Chen Puxian, a reporter from the Beijing newspaper _Chenbao_ (Morning News) who had been a journalist in both Europe and Japan. It was Chen, drawing on his knowledge of Japanese works of Marxism, who introduced major Marxist works to the May Fourth generation through pieces in _Chenbao_. Many other Chinese newspapers and magazines reprinted Chen Puxian's translations, thereby spreading these Marxist works to readers around China. Later, Ishikawa plays down the importance of the Communist group in Beijing of which Li Dazhao and Zhang Guotao were leaders beginning in October 1920, because the group contained more moderate socialists and anarchists (pp. 172-178).

Ishikawa's extensive research into the Third Comintern Congress held in Moscow in June and July 1921 leads him to conclude that the CCP did not appoint Zhang Tailei as a delegate to those meetings, but rather he became a delegate because he had excellent linguistic skills and was trusted by the Comintern representative in Irkutsk. This interpretation plays down the organizational capacities of the fledgling CCP and shows them as more dependent upon Soviet guidance. A third example is Ishikawa's suggestion that Mao Zedong's assertion that there were twelve participants at the July 1921 Shanghai conference led others to accept Mao's numbers even though there really were thirteen attendees. Ishikawa's point is not so much about the number of delegates, but to illustrate that during Mao's lifetime and afterward, his accounts of events were seldom questioned, even by those who knew he was incorrect.

Ishikawa's arguments challenge the accepted interpretation in the People's Republic of China that Communism in China developed mostly from the revolutionary efforts of Chinese radicals, who came to follow the logic of Bolshevism on their own. Instead, Ishikawa shows that Chinese conceptions of Marxism in 1919 were quite limited and they learned their Marxism through translations of the works of Japanese Marxists, along with considerable influence from translations of English-language materials, especially works printed by the American Communist Party in Chicago. In this process Chen Duxiu looms particularly important because of his strong, often dictatorial personality. Ishikawa casts Li Dazhao in a clearly secondary role to Chen Duxiu. Ishikawa emphasizes how Chen mounted continuing attacks against the moderate socialism favored by many Chinese revolutionaries who have been labeled "anarchists" because they rejected a Bolshevik-style revolution and the necessity of a dictatorship of the proletariat.

Ishikawa also gives important roles to the Comintern's two main representatives in China during these years: Gregory Voitinsky and Hendricus Sneevliet (known as Maring). In addition to their organizational and leadership experience, they brought the necessary financial resources to the fledging Communist group in Shanghai that was essential to its work. Ishikawa characterizes both men as supporting a united front approach favored by the Comintern, in which the Communists were to work with more moderate socialists and anarchists. However, the Chinese leadership in the early days of the Communist movement--particularly Chen Duxiu and the Shanghai contingent--stringently adhered to the principles of the Leninist strategy. The radical interpretations of the Chinese leadership emerges most strikingly in a document entitled "The Present Policy of the Chinese Communist Party," adopted at the July 1921 CCP Congress in Shanghai. That document called for a revolutionary army representing the proletariat that would overthrow the capitalist class, adoption of the dictatorship of the proletariat, and abolition of private ownership of the means of production, Even though Chen Duxiu was not present in Shanghai, the new CCP at its formal inception followed Chen's commitment to a Bolshevik revolution and his opposition to compromises with nationalist parties or more moderate forms of socialism.

Ishikawa's book first appeared in Japanese in 2001. For this English-language edition he has added a short introduction. The work also contains three useful appendices: 1) Chinese translations from Japanese works on socialism, with fifteen pages of citations for the
1919-21 period; 2) an annotated list of Chinese books on socialism published between 1919 to 1923, containing seventy-seven titles, and the deposition given to the police by Shi Cuntong while under arrest in Tokyo in December 1921. This deposition forms the heart of a long diversion in chapter 4 in which Ishikawa argues that Shi Cuntong was a key figure in the founding of the CCP because of his early advocacy of the dictatorship of the proletariat and his close connections with Japanese Marxists at a time when Chinese Marxists still were exploring the full meaning of Leninist Communism.

This volume provides a valuable summary of Ishikawa's research on the origins of the Communist Party in China. The translation by Joshua Fogel, a well-respected specialist in Sino-Japanese historical studies, is smooth and readable. Ishikawa is working in a field that has produced a huge volume of studies in Chinese and those works are carefully listed in his extensive bibliography. For English-language readers, however, unless one is already familiar with the personalities and disputes over the role of Soviet Russian influence during the founding period of the Chinese Communist movement, the book will require careful reading and reference to more general discussions in standard accounts, such as chapter 13 of Jonathan Spence, The Search for Modern China (1999), or biographies like Lee Feigon, Chen Duxiu: Founder of the Chinese Communist Party (1983). The biographies of many individual early Communists mentioned by Ishikawa can be found Howard Boorman, Biographical Dictionary of Republican China (1968).