Lisa Funnell's book was reviewed by Amy Lee for H-Asia and is published here under Creative Commons license.

Ang Lee's 2000 blockbuster hit Crouching Tiger, Hidden Dragon, a centerpiece of Lisa Funnell's meticulously researched study on Chinese female action stars, Warrior Women: Gender, Race, and the Transnational Action Star, exemplified what would become a new era of transnational and transpacific cinematic production. In this context, Hollywood continues to dominate the new global cinema but Hong Kong, through its formative role in the development of action cinema, plays no small part. Marked by what Stephen Teo has identified as a “globalizing postmodern” aesthetic, in which the cultural and historical specificities of various film traditions are erased, reconstructed, and commodified to cater to a global audience, postmillennial filmmaking would seem purely driven by market concerns.[1] Ever more reliant on co-productions, transnational financing, and increasingly global and heterogeneous audiences for its survival, global cinema risks reproducing generic versions of films that sell.

While Funnell outlines some of these new cinematic strategies deployed in action cinema, she makes a convincing case for how Hollywood and Hong Kong film industries, as postnational and global cinemas, also articulate cultural and ideological responses to new geopolitical concerns and relations spawned by the end of the Cold War, the rise of China, and shifts in American imperial endeavors. Action cinema is a particularly illuminating illustration of the new global cinema, not only because it is a genre with a long history of transnational ties but also because it functions as a powerful site in which personal, social, and political conflicts are staged and negotiated.

Unlike much of the extant scholarship on action cinema, which is overdetermined by notions of masculinity, Warrior Women foregrounds representations of female action stars, arguing that action cinema mobilizes the female body as a lo 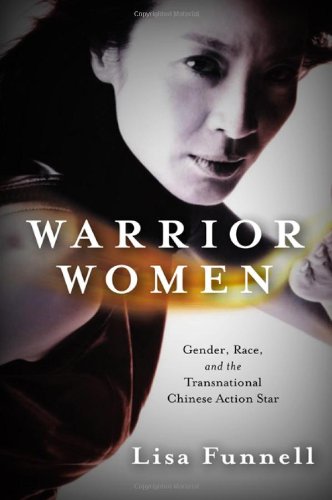 cus mediating national, ethnic, and gender identities, politics, and ideologies. In particular, Funnel's symptomatic readings of stars as wide-ranging as Michelle Yeoh, Gong Li, Lucy Liu, and Maggie Q elucidate the polysemic nature of Chinese screen identities, shaped as they are by definitive changes within the Chinese-speaking world and its relationship to the larger Asia Pacific region and the Western world, including: the return of Hong Kong to China in 1997; the Asian financial crisis; shifts in national cultural policies that impact the development of local film industries; burgeoning pan-Chinese partnerships; and the transformations in regional and global power arising from the advance of the Pacific Century.

Deconstructing the East-West binary that has plagued much of the discussion on Western imaginations of China, Warrior Women “embrace[s] a more fluid and multidirectional conceptualization of cinematic exchange” (p. 16). The book debunks reductive readings that simply critique the Western reification of the “other” in the popular imaginary (e.g. the Dragon Lady and Lotus Blossom remain two of Hollywood's most enduring images of Chinese/Asian women) and considers, instead, how the global presence of Chinese action women has more broadly influenced and problematized the production of racialized and gendered identities in Hollywood. In a similar vein, Funnell's study builds on Shu-mei Shih's provocative work on the Sinophone, a concept describing Chinese cultural productions that decenter China as the source of Chineseness in the world today, question understandings of authenticity, and underscore the heterogeneous and translocal variants of Chineseness. In so doing, Warrior Women provides a new model for film studies that moves beyond the framework of national cinema; moreover, by emphasizing the interracial, interethnic, and transcultural dynamics embedding transnational Chinese identities on the world stage, Warrior Women is not limited by diasporic models of film studies either, insofar as diasporic studies often connote the inescapability of the homeland as the origin of identity and meaning production.

Combining film analysis, reception studies, and sociology, Funnell uses a cultural studies approach that pays equal attention to representational strategies, aesthetic considerations, viewer reception, historical and political contexts, and the structural complexities of global and local film industries. Situated at the intersection of film studies, gender studies, ethnic studies, and transpacific studies, Warrior Women raises important methodological questions central to the transnationalization of these fields, and the implications for analyses of race and gender, as it urges us to reflect on the absence of Asian female bodies within canonical film scholarship and to fill in this lacuna. Funnell makes the case that female heroic performance, including the work of pan-Chinese and Chinese North American warrior women, is not simply an overlooked facet of Hong Kong film history; warrior women are pivotal in facilitating the production and reception of global Chineseness and by extension global China's relation with the world.

After providing background information on Hong Kong Hollywood connections and comparisons, and an overview of the gendered dimensions of heroic identities in Hong Kong cinema, Warrior Women offers specific case studies of female action stars in the subsequent chapters. Arguing for the significance of stars as powerful signifying texts, Funnell enlightens the reader on Hong Kong's unique star system, ge-ying-shi (music, film, television), an intermedial star system in which the celebrity of the star is the primary commodity used to promote his or her entertainment products. While playing warrior women, stars such as Michelle Yeoh and Pei Pei Cheng must still bear the burden of reproductive labor; no matter how distinguished their martial arts careers, corporeally authentic their action scenes, credible their fighting abilities--qualities enhanced by their gender-neutral personas--they eventually move to the sidelines, nurturing, training, and passing the torch to the next generation of warrior women. More than a generational bridge that sutures key moments in a long genealogy of Chinese martial arts, stars like Michelle Yeoh are also translators “who facilitate[] communication between 'the East' and the 'West' in a post-1997 context” (p. 46). They ensure, in other words, the reproduction of martial arts in the international arena.

Faced with an industry crisis, Hong Kong filmmakers began to “adopt[] a more Hollywood or 'international' style of filmmaking,” relying more heavily on the use of computer-generated imagery in action film (p. 60). With the help of technological advances, actresses without much training in martial arts have been able to get more prominent roles in action films. Yet, these films continued the tradition of dramatizing male-centered narratives where crises of masculinity reflected larger social crises found in kung fu films of the 1970s. Female stars, such as Shu Qi, often play supportive roles as “arm candy” and “damsel[s] in distress” (p. 65). Portraying “flexible subject[s],” able to adopt multiple and contradictory identities at whim, travel freely, and understand several languages including English, Shu Qi personifies what it means to be a transnational subject and adds a cosmopolitan and modern veneer to more local Hong Kong traditions, of which the male-centered action film is a part (p. 68).

At times, in her “girls with guns revivals,” Shu Qi embodies a postfeminist attitude of placing “individual ambitions and personal desires” above the interests of the group (p. 73). In her discussion of mainland action women in chapter 4, Funnell demonstrates how Zhang Ziyi can be similarly read in postfeminist ways: her desire to carve out her own destiny in Crouching Tiger leads her to ignore what she sees as a limiting “martial moral code” (p. 96). On the other hand, her actions have also been read as a form of betrayal; she is a “hero turned villain,” thus reinforcing cinematic associations of Hong Kong with the trope of the masculine hero and China with that of the “feminine villain” (p. 96). Translocal readings, Funnell eloquently argues, reveal the multifarious national and gender ideologies at work in the production and reception of Chinese screen identities. In mainland cinema, women cannot escape as a substitute for the nation; they are either victims in need of liberation or “personification[s] of a globalizing China seeking national (re-)unification and transnational connectivity” (p. 98).

The inclusion of “young, multilingual, and cosmopolitan stars,” many of whom are overseas Chinese Americans, alongside veteran actors is another strategy of creating a global and more popular aesthetic that has met with some success (chapter 5). Maggie Q, for instance, “represents a hybridization of the 'East' and the 'West' in an era of globalization, modernization, and change in China” (p. 114), though her heroic roles are still often circumscribed by racial stereotypes. Indeed, the degree to which an overseas actress can be localized as a Hong Konger, through family ties, racial looks, and language skills, often determines the kinds of roles she will get (chapter 6). The incorporation of overseas actresses in the Hong Kong film industry represents the welcome repatriation of the overseas Chinese and a possible answer to Hong Kong's identity crisis: “a more Westernized version of Hong Kong Chinese identity” (p. 149). Yet, the question remains whether this version really frees Chinese women from stereotype or whether it is equally subject to the dangers of reification.

Funnell's last chapter details the influence of Chinese female action stars on Hollywood, which essentially falls into two patterns: 1) deracinated and feminized characters such as Lucy Liu in Charlie's Angels (2000) that both defuse the threat of powerful racialized women and turn “the heroic model into a generic Hollywood version” (p. 175); and 2) “the parodic performance of Hong Kong cinematic identities” through bricolage and pastiche (e.g., the Bride in Kill Bill, 2003-04). While debunking some of the most prevalent stereotypes of Asian women in Hollywood, Hollywood seems to propose parody and pastiche as the only generic practices that can nuance the roles of Asian American characters. What kind of complexity can this really offer?

Funnell has compiled an impressive filmography in her astute analysis of Chinese warrior women, including many films that would otherwise not garner much critical attention; unfortunately, this almost encyclopedic treatment of action films is also the book's weakness, diluting insightful readings of key texts with readings of films and stars that seem tangential to the genre. Eugenia Yuan is perhaps a case in point. In detailed strokes, Warrior Women recaps the various changes in industry, modes of production, and genre that have transformed action cinema over the course of the last few decades. Yet, more focused comparative analysis of signature texts, beyond the question of identity, might lead to a deeper historical analysis that closer attention to form allows for. Even so, Warrior Women drives home a fundamental theoretical insight essential for the critical race, gender, and film studies scholar: at stake in examining the myriad representations of Chinese action women is not simply a matter of diversifying our knowledges and screens but rather a more profound understanding of the material conditions that constitute these representations. In the case of Chinese action women, the demands of global capitalism, diasporic and Sinophone desires, post-Cold War and post-1997 racial politics, and the rise of China have propelled them onto the world screen.