On September 24-25, 2015, President Barack Obama hosted President Xi Jinping of China for a State visit. The two heads of state exchanged views on a range of global, regional, and bilateral subjects.
September 25, 2015
Print 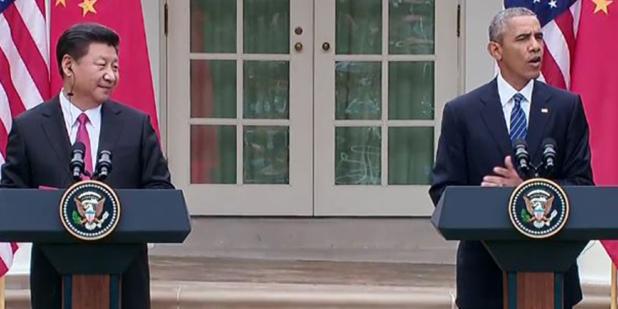 On September 24-25, 2015, President Barack Obama hosted President Xi Jinping of China for a State visit.  The two heads of state exchanged views on a range of global, regional, and bilateral subjects.  President Obama and President Xi agreed to work together to constructively manage our differences and decided to expand and deepen cooperation in the following areas:

The United States and China signed a Memorandum of Understanding that establishes a framework for development cooperation to guide our future collaborative efforts.  The MOU recognizes our shared objectives in ending extreme poverty and advancing global development through enhanced collaboration and communication under the principle of development raised, agreed, and led by recipient countries.

- The United States and China agree that timely responses should be provided to requests for information and assistance concerning malicious cyber activities.  Further, both sides agree to cooperate, in a manner consistent with their respective national laws and relevant international obligations, with requests to investigate cybercrimes, collect electronic evidence, and mitigate malicious cyber activity emanating from their territory.  Both sides also agree to provide updates on the status and results of those investigation to the other side, as appropriate.

- The United States and China agree that neither country’s government will conduct or knowingly support cyber-enabled theft of intellectual property, including trade secrets or other confidential business information, with the intent of providing competitive advantages to companies or commercial sectors.

- Both sides are committed to making common effort to further identify and promote appropriate norms of state behavior in cyberspace within the international community.  The United States and China welcome the July 2015 report of the UN Group of Governmental Experts in the Field of Information and Telecommunications in the Context of International security, which addresses norms of behavior and other crucial issues for international security in cyberspace.  The two sides also agree to create a senior experts group for further discussions on this topic.

- The United States and China agree to establish a high-level joint dialogue mechanism on fighting cybercrime and related issues.  China will designate an official at the ministerial level to be the lead and the Ministry of Public Security, Ministry of State Security, Ministry of Justice, and the State Internet and Information Office will participate in the dialogue.  The U.S. Secretary of Homeland Security and the U.S. Attorney General will co-chair the dialogue, with participation from representatives from the Federal Bureau of Investigation, the U.S. Intelligence Community and other agencies, for the United States.  This mechanism will be used to review the timeliness and quality of responses to requests for information and assistance with respect to malicious cyber activity of concern identified by either side.  As part of this mechanism, both sides agree to establish a hotline for the escalation of issues that may arise in the course of responding to such requests.  Finally, both sides agree that the first meeting of this dialogue will be held by the end of 2015, and will occur twice per year thereafter.