Reviewed by: Yongjin Zhang, University of Bristol.
Published by: H-Diplo

"We are not makers of history. We are made by history." -- Martin Luther King, Jr. 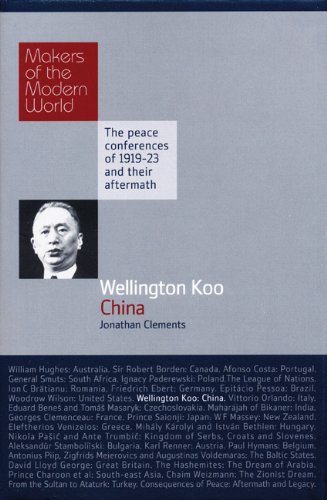 China's most tumultuous time of wars and revolutions. Koo himself observed in his diary in December 1950, not without a sense of unease, that his fate was "mixed up with every major crisis in China's international relations ever since 1912". Koo was 'mixed up' with China's international relations and foreign policy in a wide range of different capacities. He was one of the Chinese delegates to both the Paris Peace Conference in 1919 and the Washington Conference in 1921- 22. He served as Foreign Minister, Acting Prime Minister and even the Interim President under various warlord governments in the 1920s. He was the Chinese member on the Lytton Commission (1931-1932) sent by the League of Nations to determine the cause of the Japanese invasion of Manchuria started on 18 September 1931. He was present at the creation of the League of Nations and the United Nations in 1920 and 1945 respectively, representing China as a founding member. Towards the end of his diplomatic career and with the disintegration of the Republic of China on the Mainland, Koo served as the Chinese Ambassador to Washington from the late 1940s until 1956 when he retired from diplomatic service. Koo's illustrious career further saw him serving as a Judge in the International Court of Justice in the Hague between 1957 and 1967.

Not surprisingly, history remembers Koo, first and foremost, as a consummate Chinese diplomat with an unusually long, illustrious and sometimes turbulent diplomatic career. Koo was a witness to, a participant in, and an active player and in some cases shaker of China's nascent modern diplomacy, which accompanied and facilitated China's emergence as an independent sovereign nation-state. For many Chinese on both sides of the Taiwan Strait, it is the central role that Koo had played in shaping Chinese diplomacy during the Republican period?in abolishing unequal treaties in China, in shaking off extraterritoriality as a shackle on Chinese sovereignty, and in taking a giant step in realising China's great power status by virtue of its joining the 'Big Five' at the United Nations all combined?that has ultimately secured Koo a special place in history.

Ironically, history has not always been kind to Koo. Twice in the history of the Chinese revolutions, the Nationalist one in 1928 and the Communist one in 1949 respectively, Koo found himself on the wrong side of history. In 1928, the Nationalist Government under Chiang Kai-shek issued an arrest warrant for Koo, forcing him into exile in Europe and North America. The looming crisis in Manchuria in 1930-1931 saved Koo from this historical adversity and helped return him to the centre stage of Chinese diplomacy for the rest of his diplomatic career. After his retirement in 1956, Koo served briefly as senior foreign policy advisor to Chiang Kai-shek before going to the Hague. In 1949, Koo was the 22nd on the list of the most wanted war criminals issued by the victorious Chinese Communist Government, a list allegedly sanctioned by Mao Zedong himself. Following the People's Republic of China's return to the United Nations in 1971 and Richard Nixon's visit to China in February 1972, it is Mao that issued a personal invitation for Koo then living in New York to visit the People's Republic under his rule, which Koo did not take up.

Jonathan Clements' short book "Wellington Koo" is an abridged biography, which attempts to recapture the story of Koo's exceptional and illustrious career against the background of China's turbulent revolutions, wars and its diplomatic agonies in rolling back imperialist aggression in China in the first half of the 20th century. Clements' narrative is enriched by stories of Koo's personal life--his first encounter with extraterritoriality as an eleven year old boy living  in Shanghai's international settlement, his American education at Columbia University in New York, his first (arranged) marriage, the tragic death of his second wife, his third marriage in haste and his friendship with the 'Young Marshal' Zhang Xueliang, among others.

The focal point of the book's narrative is, not surprisingly, China at the Paris Peace Conference. China's refusal to sign the Versailles Treaty and the absence of the Chinese delegates from the Hall of Mirrors on 28 June 1919, as Koo reflectively noted years later, marked "a turning point in China's history". What, then, places Koo among the 'makers of the modern world' in the context of the peace conferences of 1919-23? In the second part of the book, "The Paris Peace Conference," Clements tries to answer this question through a brief examination of Chinese diplomacy at the Paris Peace Conference in 1919 and the central role that Koo played. The Clements' narrative here seeks to achieve a delicate balance between an account of diplomatic history and a broad description of Koo's biographical life. In the end, the account of Chinese diplomacy at Paris is rather sketchy and Koo's personal friendship with Wilson is possibly overstated. Clements is perhaps more successful in expounding how the chaotic domestic politics and the internal disunity of the Chinese delegation at Paris made Koo a reluctant national hero when he refused to sign the Versailles Treaty than in explaining how and why Koo made history by so doing.

One larger puzzle that has been implicitly presented but not in any sense unpacked by Clements in his book is what enabled and empowered young Wellington Koo to take history into his own hands at the signing of the Versailles Treaty in June 1919. In other words, how was Koo made by history? Two historical contexts are particularly important for consideration here.

One is the fundamental historical transformation of China's international relations in the second half of the 19th century. Clements' book has stories of Koo's encounter with the treaty system in Shanghai as a treaty port and his memory of national humiliation with China's defeat in the Sino-Japanese War of 1894-1895. The treaty system, however, also spearheaded the expansion of the European international society into China in the second half of the 19th century. By the time Koo was born in 1888, foundational institutions of the Westphalian international system, such as sovereignty, territoriality, equality, resident diplomacy, and international law had either been imposed upon, or embraced by, Imperial China. When Koo returned to China from the United States in 1912, the revolutionary change of China's body politic from an empire into a nation-state had taken place. The emergence of China as a young nation-state and China's pursuit of full independence in the rapacious nation-state system at the turn of the 20th century provided Koo and China's first generation of career diplomats -- the so-called Anglo-American group in the early Republican period -- with unprecedented opportunities both in Chinese politics and on the international stage.

The other refers to what Karl Mannheim called "generational locations". Koo was the contemporary of Chiang Kai-shek (b. 1887), Mao Zedong (b. 1893) and Zhou Enlai (b. 1898). If Koo never shared with China's first generation of true revolutionaries their belief in solving China's domestic and international problems through political revolution and anti-imperialist mass mobilization, he nevertheless shared with them an aspiration and dream to rid China of all stigmas of any imperialist aggression. Koo's preferred route was diplomacy. That is perhaps why the May Fourth student demonstration in Beijing could find resonance in Koo's diplomacy and action in Paris in 1919. Like the students in the streets of Beijing, Koo also entered history on his own terms in 1919. The historical irony is that it was not diplomacy but revolution, and it was not Koo, but Mao that fulfilled China's nationalist aspirations.

Clements's book is clearly not intended for an academic readership. It is not based on any original research. For those who seek any new understanding of Chinese diplomacy in the Republican period, not much can be learned from it. Those who expect to gain any new knowledge about China at the Paris Peace Conference are likely to feel particularly disappointed. The book is nevertheless valuable for a different reason. So far, there have been no biographical studies of Wellington Koo in English written for a non-academic readership. "V. K. Wellington Koo and the Emergence of Modern China" by Stephen G. draft (2004) and "V. K. Wellington Koo: A Case Study of China's Diplomat and Diplomacy of Nationalism, 1912-1966" by Paolin Chu (1981), extensively cited by Clements, are for an entirely different purpose and readership. Those who wish to know the life story of Wellington Koo in short hand will find this readable abridged biography particularly useful. Those who wish to embark on a crash course on Chinese diplomacy between 1912 and 1949 may also find this book helpful.