Chinoy, China Live: Two Decades in the Heart of the Dragon, 1997.

In the interests of full disclosure, I should reveal that I have known Mike Chinoy for many years (although only occasionally have we found ourselves in the same city at the same time). Our conversations have been largely about the politics, history and cultures of East Asia. Nevertheless, much of this book was new to me because Chinoy is one of those rare journalists who becomes so engrossed in the subject he is covering that his own experiences are ofttimes subordinated to it.

The common wisdom in American journalism is that it is preferable to have journalistic talent over expertise in the subject being reported. So, 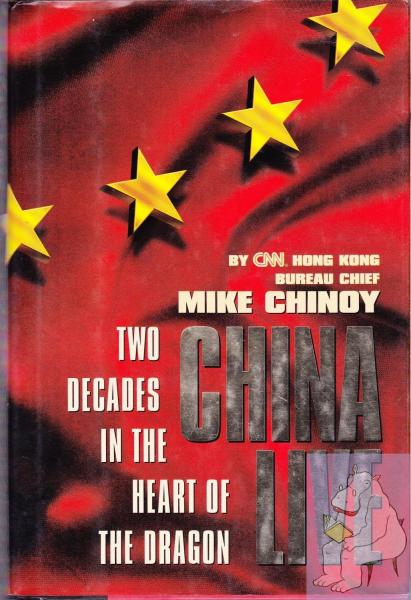 for example, The New York Times and many other American news outlets think nothing of sending reporters to Beijing who speak no Chinese nor have any background in the culture and history of the place. It really doesn't matter, this line of reasoning goes, because in two years the reporter will have been assigned to Moscow, again without language or area expertise and two years later somewhere else, and so on.

Happily, not all American foreign correspondents fall into this category. Mike Chinoy has been captivated by China almost his entire life. He studied both the country and the language at Yale University and visited China for the first time in 1973. Fascinated by both journalism (Edgar Snow is his hero) and China, he has spent most of the past quarter of a century studying and reporting on the Middle Kingdom.

After briefly freelancing in Northern Ireland, Taiwan (where he continued his language studies), Laos, and Vietnam (in the final days of the Republic of South Vietnam) and acquiring a degree from the Columbia University Graduate School of Journalism, Chinoy began his China reporting days in ernest after landing in Hong Kong in the autumn of 1975.

Freelancing for various American newspapers and reporting for CBS and NBC radio proved a mixed blessing as Chinoy relates it. On the one hand, there was the satisfaction of "covering" China with an occasional opportunity to actually get "into" the People's Republic. There was also the excitement of covering stories in the larger region such as the Afghan war, where he managed a surreptitious crossing into Afghanistan with the mujahideen. His years in Hong Kong also allowed for the cultivation of valuable contacts, especially with Chinese diplomats and journalists who, in turn, had excellent contacts inside China.

At the same time, Chinoy found his time in Hong Kong surprisingly frustrating. Primarily, there was the inability to get stories on the air. As those of us who follow events in the region are only too aware, the American networks carry pitifully few stories from Asia, despite the fact that their correspondents are filing stories daily. In addition, the prestige of working for the big networks was offset by the arrogance of those making journalist decisions back in the United States. To give but one example, when Beijing agreed to allow the opening of a radio bureau in 1981, NBC did not send Chinoy, who speaks the language and had been covering China for six years. They assigned their Houston-based reporter who had never traveled in Asia and had no Chinese language or background knowledge.

In any event, for Chinoy, the negatives outweighed the positives and, in February 1983, he took a huge gamble and joined the fledgling Cable News Network (CNN--or, "Chicken Noodle News" as it was derisively called in those early years) as one of only five foreign correspondents. Untested, ridiculed and severely short of funds, CNN would create a technological revolution: news all the time; live news, in real time; news that would play a direct role in international diplomacy as the world became accustomed to watching unfolding events together.

CNN, it turned out, wasn't all that interested in China either, and Chinoy was sent to Beirut where he covered the bomb attacks on the U.S. Embassy and the Marine barracks. In his first hundred days in Beirut, he did more stories than in all of his years at NBC and, most importantly, because of CNN's insatiable appetite to fill its twenty-four hour newshole, every story got aired--repeatedly.

For the next four years (until September 1987) Chinoy, based in London, was CNN's "fireman," ready at a moment's notice to cover wars anywhere in the world. This assignment led him into the middle of a war in Chad and left him dodging grenades in Bangkok, watching the demise of Ferdinand Marcos in the Philippines, revisiting battle sites in Belfast, watching Ronald Reagan visit China in 1984, reporting the funeral of Indira Gandhi, interviewing Muammar Qaddafi in Libya and trying to make sense of a hostage situation in Damascus. As fascinating as all this is, it's exhausting just reading about the globe-trotting.

Finally, in September 1987, Chinoy's dreams came true when CNN assigned him to open a bureau in Beijing. Over the next eight years, Chinoy travelled extensively within China (including several weeks in Tibet) and throughout the region from places as diverse as Mongolia to North Korea. Chinoy has been to Pyongyang so often that on one trip Kim Il Sung recognized him at an official banquet and walked over to the CNN crew, hand outstretched, pronouncing them "My old friends!"

Chinoy has led an interesting life and armchair travellers, journalism buffs and Sinophiles will find something of interest. However, none of that is the real heart of this book. That distinction goes to Chinoy's gripping, passionate and moving account of the events surrounding the Tiananmen protest of June 1989 and the difficulties he faced reporting it. With all his adventures, it is turmoil in the nation he has devoted his life to that inspires the best and most compelling writing. It is the soul of the book--not only because of the magnitude of the events but because, I gather from the book, the events of June 1989 were the climax in Chinoy's ideological transformation as well.

When he first became interested in China in the late 1960s Chinoy was "an idealistic sixties student radical" (p. 11) who "had once believed that Asian socialism represented hope for the future, and initially ... had viewed journalism as an instrument for my ideals" (p. 114). However, as information about and access to China became more readily available and after witnessing the massacre in 1989, Chinoy, "in the face of grim reality," saw his "youthful political enthusiasm fade" (p. 11).

Fortunately, Chinoy has not become a knee-jerk anti-Chinaist like some of his colleagues. He remains a careful and thoughtful reporter who understands that, even after his many years of covering China, he still has much to learn. He approvingly quotes a China Daily colleague who tells him, "Eighty percent of what we know we are not allowed to publish ... while eighty percent of what you foreigners publish, you don't know what you are talking about!" (p. 162).

This continuing misunderstanding of China bothers Chinoy. The images of the Tiananmen protests and subsequent massacre left an indelible image of a China that is a parody of itself. "I hold myself, along with other T.V. broadcasters," he writes, "partly responsible for the misperception in the U.S. that not only fueled the calls to take MFN [most favored nation status] away from China, but perpetuated the notion of the People's Republic as a giant monolithic, malevolent force. The images we beamed around the world in 1989 were so powerful that taking a more balanced view of Chinese several years later was, for many citizens and politicians, still almost impossible" (p. 302). Chinoy goes on to comment, "Most of my work was devoted to showing the way reform was transforming and generally improving and liberalizing the lives of China's citizens. It was a sobering illustration of the power of television that none of the images in my current stories could compete with the drama of the man confronting the tank" (p. 303).

The book is not without flaws. Chinoy writes about the frustrations caused by the restrictions placed on him by the Chinese authorities. He cannot travel without official permission, his phone is tapped, his Chinese employees spy on him, he is often followed, and Chinese friends cannot visit his apartment for fear of government reprisals. As true as this litany of restrictions are, they apply only to foreign journalists--which Chinoy knows but does not make clear. Those of us who are not journalists are able to manage China far more freely. In the years Chinoy lived in Beijing, I visited China several times, living in the apartments of Chinese friends and having not the slightest difficult meeting and visiting anyone I pleased.

On the broader theme of analyzing political events, Chinoy suffers from the common journalistic malady of narrowness. A reader without good knowledge of Chinese affairs would think that Chinese leaders make decisions solely based on internal matters. The influence of other nations is rarely mentioned when, for one example, the actions of the United States has always had a profound effect on Chinese policies from the very beginnings of the People's Republic of China and continues to this day.

And finally there is one disturbing part to this story. Chinoy recounts his association with an American intelligence officer (pp. 104-105) with whom he forged a relationship of sharing information. Chinoy admits discomfort about the liaison but explains it as a "part of a time-honored tradition," and excuses it by saying, "I felt I was getting the better half of the deal." Time-honored it certainly is but there is no telling who benefitted most. Presumably, the information Chinoy received informed the reports that went out on the air and became public; what the intelligence officer got--and how it was used--will remain secret for many decades. And here is the rub: journalists gather information to inform the public, while intelligence officers gather information to the detriment of the country they are spying on, and this information could lead to the potential overthrow of governments, the killing of people the United States government doesn't like, and who knows what other sorts of mayhem. This can only be a deeply uneven relationship and Chinoy should be commended for being honest about it but castigated for having it in the first place.

China Live is a good read, riveting when it comes to the Tiananmen events, and an important chronicle of our recent times and how international events get reported. Edgar Snow would be proud.