Employing a wealth of primary sources, including personal papers from British archives, Tom Buchanan's East Wind provides a fascinating account of the British Left's perceptions of and interactions with China over a period of five decades from the mid-1920s to the mid-1970s. It 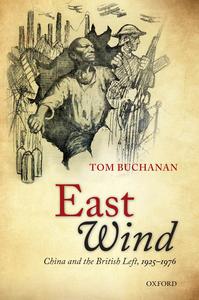 enriches our understanding of the development of Anglo-Chinese relations during the twentieth century.

Buchanan includes three groups in his definition of the British Left: first, political organizations explicitly of the Left, such as the Communist Party of Great Britain (CPGB), the Independent Labour Party, and, in later years, some small Marxist-Leninist parties; second, intellectuals of the Communist and non-Communist Left, such as Rajani Palmer Dutt, Kingsley Martin, Joseph Needham, and Bertrand Russell; third, the left wing within the Labour Party and the trade unions. The author highlights the central role of the CPGB in the Left's encounters with China, revealing its ties with organizations such as the China Campaign Committee and the British-Chinese Friendship Association. In discussing the views and policies of the mainstream Labour movement, Buchanan indicates that all the leaders of the Labour Party from Ramsay MacDonald to James Callaghan displayed an interest in China at different stages in their careers.

According to Buchanan, there were both economic and cultural reasons behind the British Left's fixation with China. In terms of commercial calculations, Buchanan argues that a consistent theme in the Left's imagination about China was the belief that trade with China would provide a solution for Britain's economic problems. Regarding emotional reasons, Buchanan points out that the British Left's solidarity with China was motivated by its deep human sympathy for the Chinese people who had been traumatized by authoritarian government, foreign invasion, and natural calamity. Buchannan's judgments of the British Left's understanding of China and the part it played in Sino-British relations are judicious. He convincingly demonstrates that the Left often took a naive view of China, "seeing only what it wanted to see in revolutionary China" (p. viii). On the other hand, Buchanan usefully reminds us that for a long period after Mao's forces took over power in 1949, when British official and unofficial contacts with China declined significantly, the Left furnished the only remaining link with the People's Republic of China (PRC).

Buchanan makes clear that there was widespread enthusiasm for the PRC within the British Left in the early 1950s and that the Korean War represented "a peak in the British left's support for China, with different elements on the left contributing in very different, but ultimately complimentary, ways" (p. 141). He points out that some within the British Left did not believe that North Korea had initiated the attack and that many more did not consider China as an aggressor. Buchanan's criticism of the scientist Joseph Needham's role in the international investigation of the alleged germ warfare during the Korean War is persuasive. Drawing upon the recent research on the subject, Buchanan shows that when Needham accepted the judgment of the Chinese scientists that the United States did conduct bacteriological warfare against China, he overlooked the changing political context for scientific research in Mao's China. The Korean fighting occurred at a time when Mao's government was forcing Chinese society, including its scientific community, to conform to the party line and policy. "Needham's political naivety," Buchanan writes, "left him ill-prepared for the hostile reception that he received on his return to Britain in September 1952" and his "career was seriously damaged by his role in the 'germ warfare' affair" (p. 135).

Buchanan's analysis of the impact of the 1962 Sino-Indian border war on the attitudes of the British Left toward China is instructive. He reveals that the conflict caught the CPGB in a dilemma because of its strong connection to the Indian Communist Party and Moscow's lukewarm backing for Beijing. The border dispute constituted a watershed in the British Left's ties with China. After the conflict, only a minority would continue to endorse China, but the majority would be more skeptical. "The war," according to Buchanan, "forced the Labour Party to make a choice between the two emerging Asian powers, and it sided decisively with India" (p. 169).

Although Buchanan's study provides an illuminating account of how the British Left considered and interacted with China, it strikes this reviewer as being one dimensional in its presentation. Buchanan's treatment would have been fuller if it had incorporated some coverage of Chinese reception and manipulation of the British Left. Buchanan would have presented his readers with an international history if he had examined how the Chinese, both the Nationalists and Communists, used foreigners, including the British Left, to "sell" their images and win international endorsement abroad. Both Chiang Kai-shek and Mao Zedong sought to use foreign visitors to China to influence international perceptions of their respective regimes. In the 1930s and 1940s, the Nationalist government attempted to use resident friends and advisers like W. H. Donald, Emily Hahn, and Owen Lattimore to advance its political and diplomatic purposes of strengthening domestic rule and obtaining international sympathy and assistance. Similarly, the Chinese Communist Party (CCP), both before and after assuming power, consistently tried to use foreign sojourners and adventurers in China such as Edgar Snow, Agnes Smedley, and Anna Louise Strong to mobilize international support.

In managing foreigners, CCP leaders drew inspirations from the Soviet experience of cultural diplomacy and receiving "political pilgrims." For instance, to boost its efforts at cultural cold war, the Soviet Union, in September 1957, replaced the All-Union Society for Cultural Ties Abroad (VOKS), a legacy of the Stalinist era, with a new Union of Soviet Societies of Friendship and Cultural Relations with Foreign Countries. At the same time, it also established a new State Committee for Cultural Ties (GKKS) to systematize and regularize its foreign cultural missions.[1] Borrowing a page from the Soviet playbook, the PRC, in March 1958, revamped its organization of cultural diplomacy by replacing the Bureau for Foreign Cultural Liaison (_wenlianju_) with a new Committee of International Cultural Contact (_duiwai wenwei_). To shape the way foreign observers viewed Mao's projects and experiments, the CCP followed the Soviet example of creating a highly hierarchical system of censorship and distribution of information. In sum, the international friends (including the British Left) of the CCP constituted a far-flung international network through which the party gained ideological support, political approval, useful intelligence, and valuable contacts for people-to-people diplomacy.

This quibble aside, Buchanan's highly revealing, well-documented, and engagingly written volume remains an impressive investigation of an important yet little explored subject.