Bernstein and Li, China Learns from the Soviet Union, 2010

Well conceived and sensibly organized, this anthology represents a comprehensive, interdisciplinary and up-to-date study of Sino-Russian 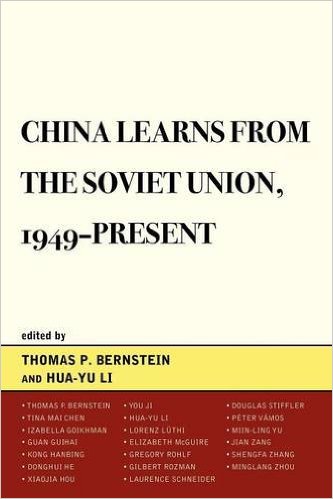 relations for English readers. It offers a cross section of essays written by both recognized figures and upcoming young scholars in the field; many of them, having received their degrees in China, the US as well as Russia, boast an international educational background. The contributors, as well as the editors, examine the formation of the Sino-Russia friendship in the period, analyze its far-reaching impact at various levels (concentrating on China) and speculate on its future development.

Divided into seven parts and consisting of 500 odd pages, the book provides an extensive coverage of Sino-Russian relations in a variety of aspects. Its first part is entitled "The Ups and Downs of Sino-Soviet Relations." Its three essays chronicle the relations from 1949, when Chinese communists took over power, to the 1980s when the two countries once again shook hands after decades-long disputes. As an overview, these essays provide useful background for readers to appreciate the reasons behind the vicissitude of the Sino-Soviet relation. They also shed interesting insights. In his case study of the return of the Chinese Changchun Railway to China in the 1950s, Shengfa Zhang, for instance, states that while Chinese leaders relied on the Soviets for building their country, Stalin and other Soviet leaders also needed China as an ally in confronting the West in postwar years.

Military alliance aside, which, incidentally, is examined more closely by You Ji in his essay in the second part, the two countries shared their commitment to communism. Having interviewed over fifty Chinese, Hua-yu Li offers a detailed study of how the Short Course of the History of the All-Russian Communist Party (Bolshevik), a tenet of Stalinism, exerted its
impact in China. It demonstrates that with respect to communist ideology, Chinese communists owed more to Stalinism than to Marxism per se, at least during the 1950s and 1960s. Her study could be strengthened had she interviewed more historians, for the Short Course was regarded as gospel for historical research in China in the period. For many years, Marxist historians in China struggled to reconcile Stalin's dogmatic description of worldwide historical evolution with the seemingly unfitting trajectory of Chinese historical development.

The influence of the Short Course was but one example of how the Chinese communists embraced the Soviet Union, which they referred to as the "big brother" (laodage) from the 1950s to the mid 1960s. This was indeed the honeymoon period in Sino-Soviet relations, in which the Soviet influence touched almost every corner of Chinese society, ranging from  economics, social life and gender relations to scientific research, higher education and literature and art. The book covers these aspects from part three to part six, presenting many interesting and insightful studies. Let us sample three examples here. Miin-ling Yu, a research fellow at Academia Sinica, Taiwan, is among the noted few Taiwanese scholars interested in
the study of the Sino-Soviet relations. Her essay, "Labor is Glorious': Model Laborers in the PRC", discusses the selection of model workers in China, following the Soviet example (pp. 231-258). Two reasons have made her case study quite intriguing. One is that while a definitive copycat exercise, the model worker selection, she points out, has actually survived and thrived in China after the two countries' relation soured in the 1960s and continued to more or less this day. The other is that she notes several key differences between the two countries in the experience. The Chinese, she observes, have not only elected model workers for their industriousness, but the selected also had to demonstrate a high level of political consciousness.

Jian Zang, a Peking University history professor, writes "The Soviet Impact on Gender Equality' in China in the 1950s" (pp. 259-274). It offers a concise survey of the effort by the Chinese communists to emulate the Soviet experience and to liberate women from the confinement of household to becoming valuable laborers in the 1950s. As this was a top-down process, this women's liberation movement had, she notes, a different focus than that of the feminist movement in Western countries. Unlike the Western feminists who fought against male supremacy, Chinese women generally believed that under socialist government, they have received equal status by law so that what they should work on is to change traditional perceptions of gender differences and "reduce the gap between women and men in many areas" (p. 268). That is, Chinese women hope to show that they are equal because they can perform as well as their male counterparts.

During the honeymoon period of the 1950s, China invited a good number of so-called "Soviet experts" (Sulian zhuanjia) to work in the country who offered advice and guidance to their Chinese colleagues. Using the experience of the "Soviet experts" at Chinese People's University (Renda) in Beijing as an example, Douglas Stiffler presents an interesting case about how the Russians interacted with the Chinese and how their work was appreciated or critiqued (pp. 303-326). His choice is an excellent one, for Renda, a brainchild of Liu Shaoqi, a Soviet-trained communist leader, next only to Mao Zedong before his downfall in the Cultural Revolution (1966-76), was a posterchild of Sovietization of China during the period. His study reveals that the Sovietization went through a few phases and the fluctuations were reflected in how the work of these Russians was received by the university. More specifically, before 1953, or before Stalin's death, Stiffler observes, the Russians "seemed like uncomplaining supermen (and -women)" whereas after 1953, they made more complaints about their
experiences in China because their work was no longer embraced wholeheartedly by the Chinese audience (p. 304).

The above three essays cover different areas where the Soviet's experience influenced China. That they mostly deal with the Sino-Soviet relations during the 1950s and the early 1960s is no surprise because that period is indeed the focus of this anthology, as shown in its title. Some readers, of course, may hope to see more studies of the relationship in more recent decades because this is also indicated in the subtitle. All the same, the book is a valuable addition to current scholarship on the subject. Its breadth and diverse perspectives will make it a "must-read" for anyone interested in China's foreign relations, and modern Chinese history in general.

If there is additional discussion of this review, you may access it through the list discussion logs at: http://h-net.msu.edu/cgi-bin/logbrowse.pl.

Copyright  2010 by H-Net, Clio-online, and the author, all rights reserved. This work may be copied and redistributed for non-commercial, educational purposes, if permission is granted by the author and usage right holders. For permission please contact H-SOZ-U-KULT@H-NET.MSU.EDU.