Zhang, Strangers in the City: Reconfigurations of Space, Power, and Social Networks within China's Floating Population, 2001

The Invisible Cities of Today's China 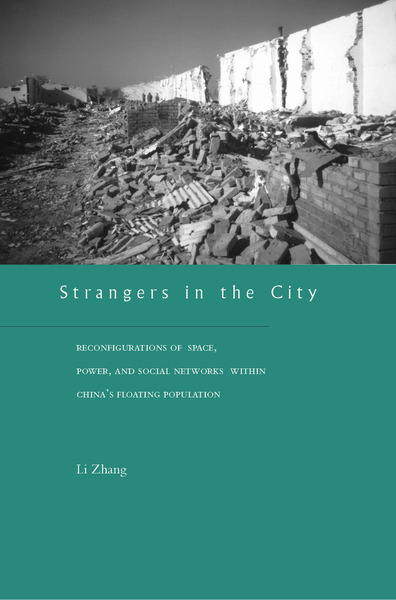 courses on urban culture. Published by Stanford University Press in 2001, her book is a revision of the dissertation she presented to her doctoral committee at Cornell University in 1998. Strangers in the City has been called a significant contribution to our understanding of power structures in China. It is indeed a remarkable piece of empirical research on China's "floating population" of urban migrants (or liudong renkou in Chinese). Zhang covers the issues of crime and punishment in Beijing by examining clandestine migrants' experience as they build a space for themselves within the city. More generally, Zhang explores in Strangers in the City the connections between spatiality and citizenship in late socialist China. She is also the author of at least three pieces on the topics discussed in her book: "Migration and Privatization of Space and Power in Late Socialist China," "Identity and Urban Belonging among Rural Migrants in China," and "The Interplay of Gender, Space, and Work in China's Floating Population."[1]

The originality of Strangers in the City lies in the privileged position that spatial process enjoys in Li Zhang's analysis. The stated purpose of the book is to ethnographically describe state and society as both are reconfigured by increased marketization and mobility. Li Zhang moves her focus from the arresting story of community construction and reconstruction to a discussion of the production of new forms of space, power, and networks. This difficult exercise in conceptualization is accomplished with dexterity without perhaps fully justifying the claim that Strangers in the City elaborates on postmodern anthropology. The back cover quotes excerpts from the assessments of the book volunteered by two eminent China scholars: Aihwa Ong (University of California, Berkeley) and G. William Skinner (University of California, Davis). Their eulogies reveal a tension between ethnographic work and the more theoretical analysis expected from anthropologists.

Li Zhang presents the results of careful fieldwork done within Zhejiangcun, the largest transient community of Beijing, as she describes a fantastic city of desire and design that simply does not officially exist. Conversely, Zhang implies a lot about the twilight of the hukou household registration system, which has been an administrative regime for population control. While most readers would pay attention to Zhang's findings on inequality, exploitation, and abuse that women experiences in migrant households, one scholar has relied on her work to go beyond gender issues and discuss the implementation of urban policies directed at restricting migration. Peter W. Mackenzie did not mention Strangers in the City, except strangely enough in his title, in his article on urban migrants and their changing administrative status.[2] "Strangers in the City: The Hukou and Urban Citizen in China" contains, however, several references to "The Interplay of Gender, Space, and Work in China's Floating Population," which is a book chapter that Zhang published a year before Strangers in the City.

Strangers in the City challenges in convincing ways the many assumptions we may have on the 100 million peasants who are seeking employment and creating opportunities in the booming cities of China. They are remarkably well organized and know how to exploit the urban market. These new entrepreneurs operate family businesses that specialize in manufacturing and trading, like those of Zhejiangcun that make and sell garments. The migrant communities accumulate a measurable amount of wealth that allows them to survive a punitive political and social environment. City governments indeed victimize migrants for being a perceived drain on local resources and the primary cause of criminality. Campaigns for city cleaning target this particularly large, mobile, and vulnerable population. In order to subject them to older forms of political control, migrants are occasionally expelled and deported back to their villages while their illegal settlements are demolished. However, these dramatic methods have failed to destroy the informal networks and the geographically based loyalty that migrants have developed. Migrants rely on the successful forging of patron-client networks during their negotiations with officials for a private space within the city. This interesting observation would explain why the introduction of market capitalism may not lead to the withering of the Chinese state. The spatial politics of Zhejiangcun offer original and sobering perspectives on the Chinese party-state's new regulatory modes of governance, which conflicts with what we know of postsocialist transition elsewhere.

Anthropologists, political scientists, and historians have lately written fascinating books that bring together several tropes, such as the physique of Chinese cities, the routine of daily life, and the interventions of state ideology. They portray a hybrid environment crisscrossed by borders drawn by tradition and modernity, nation and globalization. The urban landscape is shaped by the individual tactics and community strategies that are adopted when confronted by public agencies. James H. Carter's Creating a Chinese Harbin (Cornell University Press, 2002) and Michael Dutton's Streetlife China (Cambridge University Press, 1998) are examples of vivid accounts that introduce us to the local urban scene and, from there, to the major challenges faced by China. Strangers in the City relies on a similar approach as the analysis evolves from one geographical scale to the other. A personal twist adds to the significance of the research: the author introduced herself as being related to the community she has studied since her mother was from Zhejiang Province. She was therefore granted unprecedented access to the families that migrated to Beijing. In that sense, Strangers in the City completes the work done in Beijing several years ago by another Chinese woman, Jianying Zha (China Pop, The New Press, 1995) who described in a more literary vein the changing cultural scene of the urban elite. In both cases, the authors captured as insiders the fundamental contradictions of Chinese socialism when they examined marginal yet crucial developments that are poorly understood by urban scholars outside China.

Republished with permission from H-Net Reviews