The Making of a Transnational Illegal Alien: Chinese Migration in the Americas

In addressing the history of Chinese migration to the Americas and the development and operation of labor networks, most scholars either use a temporal focus (the coolie period of the mid- to late nineteenth century or the twentieth century) or a geographical focus on a particular country or a single border region, such as the US Southwest and the contiguous Mexican states or the North American Pacific Northwest. The book under review goes beyond both the temporal and geographical approaches of previous scholarship.

In Alien Nation: Chinese Migration in the Americas from the Coolie Era through World War II, Elliott Young’s research not only bridges the gap 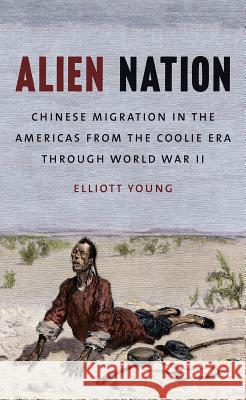 between the nineteenth and twentieth centuries but also offers a truly multinational and transnational approach. The book, part of the David J. Weber Series in the New Borderlands History, investigates the stories and experiences of migrants from the Pearl River Delta in China, across the transnational spaces of oceans, to and through Peru, Cuba, the United States, Canada, and Mexico, and sometimes back across the waters to China once again. Young also provides a comparative history of the growth of the immigration bureaucracy in the United States, Mexico, and Canada, and the ways in which the state interacted with the Chinese in North America. Thematically organized, Alien Nation aims to present both the forest and the trees—individual stories and the global context—in what Young terms “Greater North America.”

The first two chapters comprise part 1, “Coolies and Contracts, 1847-1874,” which looks at how the Chinese migrant laborer in Cuba, Peru, Mexico, Canada, and the United States emerged as the middle occupant between the post-emancipation idea of the voluntary/free emigrant and the slave. The coolies’ labor contracts essentially held them in a type of forced labor, and the transnational nature of trafficking made it difficult for various national governments to control and track the movement of Chinese migrants once in the Americas. Young’s writing in part 1 effectively individualizes the stories of the coolies—especially the vivid descriptions of Chinese mutiny on the high seas and other ways in which the coolies exercised clout in the course of their trafficking—while also highlighting the larger transnational forces at work. Young emphasizes the continuities linking the nineteenth-century coolie with the twentieth-century Chinese immigrant: the coolie had ostensibly become a free laborer, but a variety of legal measures and social constructs created the discriminatory atmosphere that made the Chinese in the Americas an illegal alien.

In part 2, “Clandestine Crossings and the Production of Illegal Aliens, 1882-1900,” chapters 3, 4, and 5 examine the rise of the modern immigration bureaucracies at North American border crossings and the strategies with which Chinese migrants attempted to circumvent authorities. In this period, the United States took the lead in restricting Chinese immigration and creating an exclusionary administrative structure, while Porfirian Mexico embraced open immigration. The other countries fell somewhere in between these two extremes. Young’s focus on the massive immigration bureaucracy in the United States reveals a behemoth used to discipline, punish, and create an “illegal alien” out of the Chinese migrant. Canada followed the US lead in creating a federal immigration structure, though the country let in more Chinese and had a stricter deportation policy than the United States. The late nineteenth-century immigration bureaucracies in Cuba, Mexico, and Peru remained small and inconsequential in comparison.

Despite the maturation of the modern immigration bureaucracy in the United States, the Chinese, according to Young, frequently outwitted US border officials and became, along with Chinese brokers and merchants, part of a vast transnational underground network of migrant smuggling and clandestine, illegal border crossings. On rail cars and by foot through the “northern back door” of Canada or the Mexican “back door,” or on boats in the Gulf of Mexico to Cuba and then to the US mainland, Chinese migrants exploited various illegal methods of entry into and out of several countries in the Americas. To uncover many of the strategies used by the smugglers, Young utilizes the stories told by Chinese migrants to US border officials when the illegal migrants were detained. Because it was cheaper and less onerous to cross illegally, most Chinese took the clandestine route into the United States. This helped create the concept of the “illegal alien” and contributed to the criminalization of furtive border crossings.

Chapter 6 begins part 3, “Competing Revolutionary Nationalisms, 1900-1940,” and details the violence perpetrated against the Chinese in northern Mexico during the Mexican Revolution. Mexican nationalists connected the Chinese in Mexico to the Porfiriato, and used violence and other tactics, both legal and extralegal, to expel most of the Chinese from the states of Sonora and Sinaloa by the 1930s. Chapter 7 deals with another revolution, that which surrounded the fall of the Qing dynasty in the early 1910s, and the transnational organizations in the Americas connected to those events. These underground bodies, such as Baohuanghui, smuggled Chinese migrants and helped them find work, and also served as conduits across borders, linking family members and political bedfellows. The violence accompanying the collapse of the Qing also spilled into Mexico and Cuba during the Tong Wars.

In Alien Nation, Young has successfully produced a sweeping yet nuanced study of transnational Chinese migration to the Americas, spanning the mid-nineteenth century through the decade of the Great Depression. His exhaustive research led him to archives in seven countries on three continents. The sources he uses are varied and thorough: immigration reports and court records, diplomatic correspondence, migrants’ letters, and Chinese-language newspapers, as well as a mass of quantitative data. There is much going on in this book, and many moving parts. At times the reader might feel momentarily lost in the mass and diversity of the data. This is, however, a mild critique, one that speaks more to Young’s breadth of scholarship than to a lack of organization in his study. Peru does get short shrift in this study, as Young naturally focuses on the connections between Chinese migrants and immigration bureaucracies in North America. After an intriguing investigation in chapter 2 of the Cañete Valley Massacre, for instance, Chinese migrants in Peru are overshadowed in the analysis by their brethren in North America.

Notwithstanding this minor complaint, with Alien Nation, Young has done a great service for scholars of migration studies, the Chinese in the Americas, borderlands, and transnational history in general.