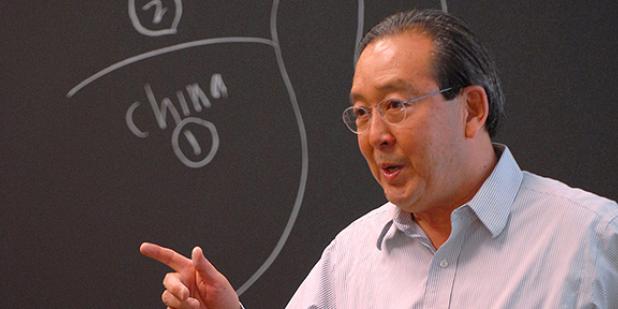 Samuel Yamashita is the Henry E. Sheffield Professor of History at Pomona College, where he has taught since 1983. He received his Ph.D. degree in Japanese history at the University of Michigan in 1981 and was a postdoctoral fellow at the Reischauer Institute of Japanese Studies and senior tutor in East Asian studies at Harvard University.

Professor Yamashita teaches Asian history at Pomona College. "Asian Traditions," his introductory survey of Chinese, Indian, Japanese, and Korean history from prehistory to 1500, is one of the largest and most popular classes at the College. One of the campus' most popular instructors, Professor Yamashita was the recipient of the Wig Distinguished Teaching Award in 1986, 1990, 1995, 2001 and 2006, and was recently Pomona College's nominee for California Professor of the Year (2004) and the Robert Foster Cherry Award for Great Teaching (2005). In addition, he has served as chair of the history department and coordinator of the Asian studies program, the oldest college-level program of its kind in the country since it was founded in 1936.

An expert on early modern and modern Japanese intellectual and cultural history, Professor Yamashita has written extensively on the subject. Master Sorai 's Responsals, his translation of Ogyu Sorai's Sorai sensei tomonsho, was published by the University of Hawaii Press in 1994. He is also the co-translator of The Four-Seven Debate: An Ilnnotated Translation of the Most Famous Controversy in Korean Neo-Confucian Thought (State University of New York Press, 1995). His recent publications include the short interpretive history "Asian Studies at American Private Colleges, 1808-1990," in Asia in the Undergraduate Curriculum: A Case for Asian Studies in Liberal Arts Education (M.E. Sharpe, 2000) and an essay on a star-crossed Japanese American baseball team, "The Aloha Team, 1942-1943," in More Than a Game: Japanese Americans and Sports (Japanese American National Museum, 2000). "War and Ethnicity in the Study of Modern Japan," a personal and historiographic memoir on the modern Japanese history field, was included in Japan in the World / The World in Japan (University of Michigan Press, 1999).

In the 1990s, Professor Yamashita recognized that there was a dearth of primary source material pertaining to the Pacific War that he could use in his courses on modern Japan, and he began to collect letters and diaries written by ordinary Japanese during the war. As he read them, he found that the picture of life on the home front from these personal documents was not well represented in the existing war literature - it is a much more complex one that challenges the prevailing view of a unified Japanese citizenry and raises important questions about the way the war ended.

To that end, he has collected close to eighty diaries by adults, servicemen, teenagers, and children during that period, and has read and translated nearly sixty of these personal journals. He recently published eight of these diaries in Leaves from an Autumn of Emergencies: Selections from the Wartime Diaries of Ordinary Japanese (University of Hawaii Press, 2005) and has been giving book talks across the country since fall 2005. He hopes that teachers will find the diaries in his book interesting and beneficial in their lessons on modem Japan, World War II, and world history. He hopes, too, that his book will inspire graduate students to use wartime Japanese diaries, an underused treasure trove, in their own research. Finally, he hopes that thoughtful people will find the wartime diaries of ordinary Japanese not only interesting and informative, but also therapeutic in our own time of war.

Professor Yamashita's latest endeavor is a ten-year food project that will focus on the history of Japanese food and fusion cuisine of the Pacific Rim. "Licking Salt for the Nation: Food and Diet in Wartime Japan, 1937-1945," his first foray into this new field, will be included in Theodore Bestor's Cuisine, Consumption and Culture (University of California Press, in preparation).