Xu, Strangers on the Western Front -- Chinese Workers in the Great War, 2011

Xu Guoqi's book was reviewed by Michael Neiberg for H-War and is reprinted here via Creative Commons license.
January 1, 2011
Print

During a recent trip to Paris I found myself near Les Invalides and unexpectedly surrounded by policemen who were preventing pedestrians from either crossing the bridge or accessing the Metro. Soon a detachment of the Garde republicaine came riding by on their magnificent 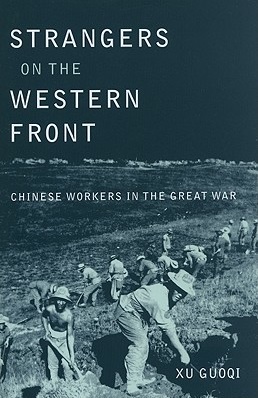 horses and wearing immaculate uniforms that looked like they came straight from the nineteenth century. I turned to a woman next to me and asked what was going on. She made a derisive sound and told me that President Sarkozy was entertaining the Chinese premier and they would be by at any moment. Sure enough, a procession of limousines and police cars came by with Sarkozy waving out the window to a crowd that barely registered his presence. After the show was over, the woman turned to me and said "Now I will be late. I hope Sarkozy gets enough money out of the Chinese to make it worth it."

As Xu Guoqi shows us in this fascinating book, the road to this state visit of a powerful Chinese leader to a cash-strapped France actually began in 1915. In that year, China proposed to Britain and France a "laborers as soldiers" campaign that eventually dispatched 140,000 Chinese men to the western front. The idea was to use these laborers as a means of contributing to Allied victory and, hopefully, guarantee China a voice in the postwar world without having to engage China in the murderous combat on the western front. The laborers were to give China leverage over both the Allies and over Japan, which was allied to Britain but cast acquisitive eyes on China.

Xu follows these laborers from their recruitment by Chinese and European agents to their service on the western front, to their postwar return to China. He argues that they served as a bridge between the West and the East, giving each side its first sustained contact with the other. He also argues that the Great War struck China at a particularly important time, with the full impact of the Revolution of 1911 still very much unclear. China was seeking new ideas and looking outward for the first time in centuries. The experiences of these laborers in France both showed them what the West might offer to China and left them horrified at what the supposedly advanced civilizations of the globe were doing to one another.

The treatment of these laborers was predictably poor. They were paid little, worked hard under extremely difficult conditions, and had to deal with the consequences of traveling a great distance to a strange land. Most of them transited through Canada in secrecy, barely being allowed to leave their railroad cars as they moved from the Pacific coast to the Atlantic. Xu devotes an informative and entertaining chapter to the workers' experiences in Canada that nicely summarizes the puzzlement with which most Westerners responded to the Chinese workers.

Xu argues that racism and Western paternalism played critical roles in the poor treatment of the laborers, but he also acknowledges that a simple lack of translators and mutual cultural ignorance made a difficult situation much worse than it need have been. Chinese workers also found themselves much closer to the front lines than they had expected, leading to casualties and exposure to danger that none had anticipated. YMCA programs and other attempts to "uplift" the laborers proved to be scant compensation for the difficulties and dangers of service on the western front.

Perhaps the most interesting chapter of the book deals with Chinese elites who came to France to help look after the laborers. Unlike the laborers, who came for the money and a chance to see new worlds, these elites came because they were inspired by the rhetoric of Woodrow Wilson and sought a chance to learn the ways of the West in order to help China modernize. They generally looked down on the laborers as rural and ignorant but nevertheless tried to help them when they could. Their interactions show the divergence between the old China and the China that the elites hoped to create.

As happened so often in the years 1914-19, the war created not a chance to build a better future, but bitter anger and disappointment. Perhaps inevitably, the France that the Chinese laborers saw was a place of hardship and death, although most Chinese thought the French far superior to the much more racist British. The Chinese under British care lived almost as prisoners, held in barbed wire pens and subjected to harsh military discipline.

Real disillusion came in May 1919 when the Big Three peacemakers awarded the formerly German Shandong peninsula not to China, but to Japan. Thousands of the laborers came from Shandong and, like most of their countrymen, they were bitterly angry at what they saw as the Allied betrayal of their country. Japan's acquisition of Shandong led to riots across China; they are remembered today as the May Fourth movement and as a critical moment in the development of Chinese nationalism. Today a monument to the movement stands in Tiananmen Square in Beijing alongside monuments to other watershed events in Chinese history. For Xu, the movement represents the culmination of Chinese anger and disillusion with Western models. The war had brought the differences between China and the West into sharp relief, with those most directly exposed to the West being among those most deeply disillusioned.

The story Xu has to tell is wonderful, linking as it does a China in transition with a Europe descending into chaos. Using sources in Canada, China, France, the United Kingdom, and the United States, he makes powerful arguments and brings this story to light. In doing so, he tackles the historian's challenge of trying to give voice to people who did not themselves leave many records. Most of the laborers, after all, were illiterate. Nevertheless, Xu's diligence in finding sources on three continents has paid off.

Strangers on the Western Front is a reminder of the global impact of the Great War. The war had the ability to reach as deep as previously isolated communities in rural China and lead people living there to change their entire worldview. It is also a reminder that the war occurred in a dizzying variety of contexts. Even for China, a country that did not engage in combat, the war brought deep and lasting change.