White, The China Choice: Why We Should Share Power (September 1, 2013)

Hugh White's book is reviewed by Robert Farley for H-Diplo in February 2014. It is reprinted here via Creative Commons license.
June 10, 2014
Print 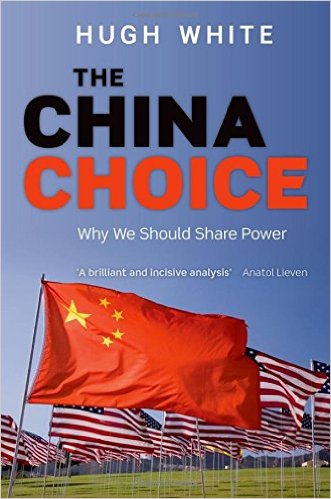 depending on whether the United States acknowledges a Chinese sphere of exclusive interest.

White writes primarily for Australian and American audiences, and consequently focuses most of his attention on American choices. He argues that the current strategic conversation in the United States is tilted toward confrontation rather than managed competition, and that this orientation is reflected in popular attitudes toward China. However, the strategic community does not fully appreciate the magnitude of long-term confrontation with China, a country that will someday possess economic resources well beyond those of the United States. White contends that the United States can take steps to avoid a destructive period of confrontation by granting de facto recognition to China's interests in its near abroad.

The biggest problem with China Choice involves White's unwillingness to fairly describe the views of his interlocutors. The reader gets a very good sense of what White disagrees with, but very little sense of who he disagrees with, or if he gives a fair account to the opposing arguments. This goes beyond questions of engagement with existing scholarship, although specific citations of opposing arguments would have helped. Even within the U.S. strategic community, opinions about the threat posed by China differ significantly.

Moreover, it is not obvious that White's description of American attitudes toward China is sound. He argues that most Americans view the growth of Chinese power with alarm. This is probably true in an opinion poll sense, but few Americans seem sufficiently concerned about the growth of Chinese power to support even modest steps to restrain China. Americans continue to buy goods produced in China, generally prefer lower defense spending, and have no apparent appetite for or opinion on most of the territorial disputes that China has with its neighbors. At the elite level, the American business class remains happy to build relationships with its Chinese counterparts, and with the Chinese government.

White also understates the management and coordination problems associated with the "choice" of coexistence over confrontation. Even to the extent that two great powers choose to pursue congenial competition, they run into a variety of day-to-day management problems that become sources of friction, misunderstanding, and hostility. As the rule-set for congenial competition must remain ambiguous and less than fully formed, conflict inevitably emerges over whether some particular activity constitutes "following the rules." White briefly discusses the nineteenth-century Concert of Europe as a model for managed great power competition, but he does not note the many critical differences between the two cases, and the discussion is not particularly satisfying or illuminating in this regard.

I also suspect that White overstates the certainty of China's growth as a Pacific power. It is likely that China's GDP will exceed that of the United States within the next two decades, but it is not certain. In addition, China faces precarious security situations on its land borders as well as its maritime space, problematic demographics, and a restive deep interior. Even granting the likely increase in Chinese military and economic power, the prospects of China eclipsing other regional powers, such as Russia, Japan, and India, in political and diplomatic terms appears uncertain. Washington might find it easier to manage a coalition of states interested in containing Chinese power than to manage a partnership with Beijing. Indeed, there is some question as to whether these other powers would accept a "partnership" that privileged Beijing's interests over their own.