Welland, A Thousand Miles of Dreams: The Journeys of Two Chinese Sisters, 2006.

Reviewed for H-Childhood by Valentina Boretti, Department of History, School of Oriental and African Studies, University of London

Biographies are said to narrate the life of an individual. In this multi-layered work, Sasha Su-Ling Welland accomplishes much more, as she relates a complex story of re-creations, self-discovery, and selective memories, whose protagonists are scientist Amy Ling Chen (born as Ling Shuhao in 1904), and writer/painter Ling Shuhua (1900-90), namely the author's grandmother and great-aunt. Showing how the two sisters constructed their identities and their past, at times suitably forgetting details but always giving special prominence to their youthful days and to their real or metaphorical departure from old and/or familiar settings, Welland effectively illustrates the non-linearity and relativity of past experiences, thus nuancing the stories that her protagonists attempted to present as clear-cut and consequential. 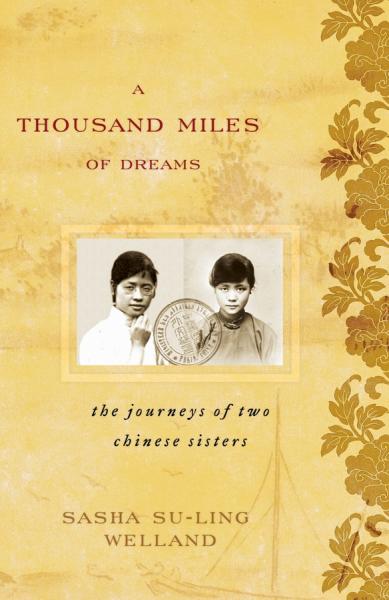 Welland intends her work to be "a set of stories that speak to personal and public ways of thinking about feminism, our relationship with the past, and the creation of border-crossing identities" (p. 14). In order to achieve this goal, she uses oral accounts, fiction, family objects, and documents, irrespective of veracity, to show the significance of sentiments, perceptions, and even lies. Fittingly, she does not fail to underscore the relevance of material culture and symbols in remembering and re-creating the past (e.g. photographs, furniture, fake family portraits). While probing the imaginary of her protagonists, she manages--most of the time--to maintain a critical distance, avoiding to be trapped in their narratives.

The eventful lives of the two protagonists span almost a century, and move between China, the United States, and Great Britain. Through three sections, devoted to origins, departures, and destinations, Welland traces her relatives' lives and achievements, with a special focus on youth. While consistent with Amy and Shuhua's cultural bias, this choice slightly unbalances the book. At the same time, it results in an interesting, albeit sketchy, portrait of (wealthy) family life and
(privileged) childhood in a momentous period of modern Chinese history, namely the difficult transition from empire to republic. We thus catch a glimpse of the complicated workings of a scholar-official's extended family; the education of children; the games in the courtyard; and a child's "sense of abandonment" in a large, competing household (p.59)-although the latter might be too contemporary an interpretation, for "abandonment" could also be seen as freedom.

On the other hand, the Chinese childhood that we see here is not necessarily true to reality. The Ling sisters' accounts are, instead, very valuable in showing the ways in which childhood can be imagined, constructed, and used in later stages of life: for instance, to make sense of subsequent events; to provide grounding and continuity; or to conveniently identify the origin of one's choices, somehow giving life a trajectory. Also, the relevance that the Lings attribute to young age is typical of their epoch, a time when the rhetoric of youth and newness (together with emancipation and modernity) reigned supreme in China. For all of these reasons, the sisters portray a childhood that is constructed as different and better than the "traditional" one. Amy, for instance, describes herself as endowed with the (quasi-masculine) determination and character necessary "to outrun a traditional girlhood" (p. 66). Mischievous and curious, fond of active games, dressing as a boy, always in control, she escapes the boundaries of her courtyard, those that would frame her movements and cast her as an "old-style" girl, like her mother and sisters. Ling Shuhua, conversely, escapes by means of imagination, contemplation, painting, and literary pursuits.

Although passing themselves off as modern, both sisters replicate in their self-construction some old-standing topoi of Chinese female representation: cross-dressing warrior/hero; art- and literature-bent lady. Moreover, they essentialize the picture of traditional womanhood and girlhood, thus complying with the modernist construction of "traditional" Chinese women as helpless. And yet, Amy's mention of a (fictitious?) influential grandmother--perhaps unwillingly--does show the power of "traditional" women. Also, both sisters overlook the fact that their "outrunning" was made possible by their very environment, namely wealth and a sympathetic (though possibly conservative) father. Significantly, they both claim to have been very close to their father, and are somehow patronizingly fond of their mother (a concubine)--as if they had to draw a line between her and themselves.

After describing childhood, Welland proceeds in mapping the contradictory ways in which the Ling sisters reinvented themselves through different times and places, fighting against discrimination yet discriminating against people of color (Amy), or rejecting exoticism while exploiting it to achieve fame abroad (Shuhua). We thus follow Amy's scientific pursuits that lead her on a scholarship to America in 1925 (when the "Yellow Peril" rage was rampant), with the intention to become a doctor and return to China to open a clinic for women. After graduation, she first chose to assist her husband in his pharmacological research, then to give up her career and concentrate on pursuing American respectability (imposing that model on her daughter, too), her feminism perhaps "displaced" (p. 316) in her interest for the stock exchange. Except for a trip in 1936, she does not return to China. Despite her attempts to assimilate, she is always considered quite "exotic." Meanwhile, Ling Shuhua gains a certain fame on the Chinese literary scene. But in the politicized late 1920s and early 1930s, her modern-cum-traditional style as well as her focus on women's and children's psychology make it difficult for her maintain credibility--thus illustrating how old paradigms still held their grip.

Shuhua's connections with the Bloomsbury literary circle are then explained, rightly avoiding the attribution of excessive significance to her affair with Julian Bell, Virginia Woolf's nephew.[1] After moving to Great Britain in 1946, Ling Shuhua sought to reinvent herself as an artist there. She exhibited her paintings; published a pseudo-autobiography, _Ancient Melodies_ (1953) that partly consisted of her earlier fiction in translation; and became--perhaps conveniently--trapped into a fake exotic image of China: a far cry from the truthful portrait she intended to convey. She subsequently returned to China in 1989, shortly before her death.

Exoticism and stereotypes are among the book's best explored aspects.

Looking at cultural encounters, Welland shows how Chinese modernizers'interest in "the West" (equated to technology and science) was paralleled by some Westerners' turning to a mythical, quasi-mystic, non-existent "East." The power of the cliché is then shown in relation to Shuhua's and Amy's accounts. If Amy presents a "nuclear...version" of her family (p. 61), conveniently purging concubines and half-siblings, Shuhua's "autobiography" surrenders to exoticism. Instead of fiction, Virginia Woolf encourages her to write an account of her childhood, allegedly conducive to a foreign reader's better understanding of China--all the more, one should add, if that account happens to conform with the stereotypes readers already have in mind. In fact, many female characters in _Ancient Melodies_, while originally conceived as bawdy women, are "tamed into jealous wives more overtly oppressed by patriarchy" (p. 282), while Vita Sackville-West's introduction to the book mentions "a forgotten world" of "peaceful contemplations" and "exquisite thoughts" (p. 306), i.e. the ultimate stereotypes of China.

While not especially representative of early twentieth-century Chinese society, the Ling sisters do illustrate quite well a certain Zeitgeist of reform, "modernity," and discovery--which Welland explores using their lives as a lens. Throughout the book, she also touches upon many significant aspects of the history and culture of modern China and, to a lesser extent, the United States: "modernization," progressivism, cultural encounters, racism, social change, relevance of science, and shifting notions of femininity, to name but a few. At times, however, the historical background can be slightly burdening, and one wishes instead for more space devoted to the sisters' personal experiences, or at least for a better integration of background and life events. But this didascalic approach depends perhaps on the fact that the book is apparently addressed to a public who is not familiar with Chinese history. Intended readership does not, however, explain why Welland has questionably chosen not to include a bibliography, which is only available on the publisher's website. One remains, moreover, somewhat concerned about fairness and comparative use of sources, given the fact that Amy's story is mostly based on her oral accounts to her own family, while the figure of Ling Shuhua mainly emerges out of Welland's (perceptive) reading of her fiction--some of which was written for foreign audiences--and partially from her daughter's recollections.

Finally, this book also reveals much about the author as her investigations enhance her self-discovery: although this undoubtedly adds flavor, it risks, on occasion, to divert the focus of the narration. Overall, however, _A Thousand Miles of Dreams_ is a well-written and valuable work, especially for the many interesting points that it makes on the intricacies of cultural encounters, usages of the past, and exoticism.