Home / Reviews - China and the World

Jessica Chen Weiss's book was reviewed for the History of Nationalism discussion list by Yana Zuo and is reprinted here via Creative Commons license.
Print

In Powerful Patriots, Jessica Chen Weiss studies the Chinese government's management of antiforeign protests between 1985 and 2012 and the relevant diplomatic consequences following the government's tactics. She provides fascinating details on both anti-American protests and anti-Japanese demonstrations that took place in various Chinese cities. As highlighted several times by the author, the demonstrations examined in the book include those that were permitted by the government--the 1999 anti-American protest and the anti-Japanese demonstrations that took place in 1985, 2005, 2010, and 2012--and those that were repressed by Beijing--the 2001 anti-American protest and anti-Japanese protests throughout the 1990s and late 2000s. Weiss argues that the Chinese government is more tolerant of nationalist protests when it wants to signal its resoluteness, and it tends to repress antiforeign protests when some room for diplomatic compromise is desirable. She describes the government's role as traffic lights with protesters "in the driver's seat" (p. 3); that is to say, the government enforces limits by signaling when protests are to start, stop, and exercise caution.

According to the author, by looking at the interactions between the Chinese government and nationalist movements, Powerful Patriots can shed some light on understanding the degree of popular influence on China's foreign policymaking. Weiss goes a step further to argue that antiforeign protests management in authoritarian states is a credible signal for evaluating the influences of domestic politics on international relations. In turn, it serves as a valid tool for testing whether public opinions are the main source contributing to the success of "democratic peace." 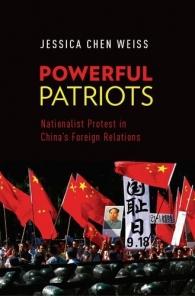 Powerful Patriots is a comprehensive study of Beijing's management of major antiforeign protests across about three decades. It is one of only a few works that looks at the role played by public opinion in China's international negotiations. From this perspective, Weiss makes a valuable contribution. Within much of the existing scholarly work analyzing China's foreign policy, the role of China's general public is often ignored. Weiss includes information gathered from interviews, governmental documents, online discussions, and many other channels, such as memoirs of government officials and yearbooks. It is indeed an informative book for understanding contemporary Chinese nationalist movements and Chinese politics in general.

Interesting as the book is, Weiss's overall arguments are not convincing. In chapter 2, Weiss lays out a theoretical framework that claims to tackle a broad range of issues--including regime instability, state incapacity, elite conflicts, and other domestic factors--and to examine how those issues contribute to authoritarian governments' management of antiforeign protests. If I read Powerful Patriots correctly, this framework is expected to serve as the foundation on which the author analyzes the cases and makes her overall arguments. However, this framework loses touch with the actual case studies. To put it differently, the promise is not fulfilled; Powerful Patriots does not show much evidence in accounting for how those issues played out in Beijing's management of antiforeign protests or how they interacted with each other. Hence, it is puzzling to me how Weiss has drawn the conclusion that China's management of nationalist movements reflects the style of authoritarian states. If Weiss wants to make the case that regime type has such a significant role in how antiforeign protests are managed, then she needs much more engagement with such issues as state (in)capacity and regime (in)stability, as promised in the theoretical chapter. Moreover, if Weiss wants to claim that her conclusion about China is applicable to other authoritarian states, a more robust analysis to demonstrate how the operations differ from nonauthoritarian states is needed. Otherwise, it seems that Powerful Patriots is just picking up information to justify a preset conclusion.

Indeed, at times, certain arguments are drawn based on sheer speculation. For example, the following line of argument appears more than once: had the Chinese government wanted to show a stronger signal of resolve, it could have done so by taking a more lenient attitude toward antiforeign protests. But there is more than one way to show firmness; Beijing could limit further mobilization of the public while showing its resolve through military maneuvers, economic sanctions, and many other coercive strategies that the author does not consider. Policy implementations are constrained by domestic and international structures. This line of argument would only be valid if Weiss actually demonstrated that no applicable domestic or international structural constraints existed and that it was the government's intention that was the only accountable explanation for such policy options.

Similar to many other studies on Chinese nationalism, Powerful Patriots takes the Chinese antiforeign protests out of the context of nationalism studies.[1] There is no engagement with either the nature of China's nation-building project or the theorization of nationhood in general. In fact, if we observe Chinese nationalist movements closely, there is nothing exceptional about them. The very concept of the nation is a novelty in many non-Western states after World War II, as noted by Weiss. The nation-building process in many non-Western states has grown out of principles of self-determination, decolonization, and struggles for sovereignty recognition. It is no surprise that antiforeign sentiments form the foundation for the very being of how these states conceptualize themselves. Governments take the responsibilities to protect materialistic interests, such as the integrity of territory, and also fulfill their duty to constitute a modern identity that never existed. A complex relationship between states and antiforeign sentiments is formed during this process. This applies to a good number of newly independent states with various regime types, authoritarian or democratic. As far as sovereignty, territory, and other "high politics" issues (for example, territory and security) are concerned, regime type does not matter much. Weiss has not convinced me that regime type, rather than other factors, such as the nature of nationalism movements, determines how antiforeign protests are dealt with. Hence, the link to "democratic peace theory" is too much of a stretch; the theory itself, not to mention, is widely challenged.[2]

To be sure, while there are some weaknesses in the book, Powerful Patriots is a good read for people who want to understand Chinese politics and contemporary Chinese nationalist movements.