The Week that Changed the World: The Inside Story of Richard Nixon’s 1972 Journey to China

Video of a symposium featuring top Nixon assistants discussing “the week that changed the world.” 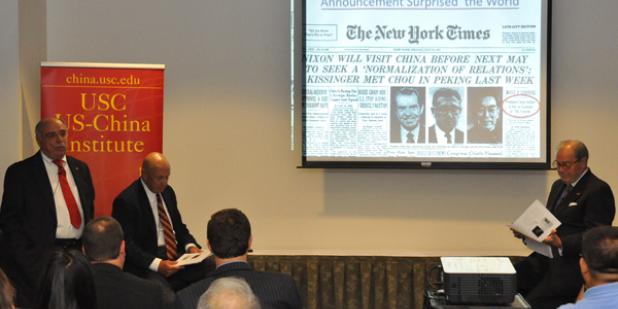 On July 15, 1971, Richard Nixon went to NBC’s studios in Burbank, California and announced that he would visit China. The news came as a surprise to all but a few people. Because the U.S. didn’t have diplomatic relations with Beijing, the U.S. government had none of the usual diplomatic infrastructure in place to support the visit. Where would they go, what would be done, and who would be involved all had to worked out. How would the President stay connected to the government he led in the U.S. and how would news coverage be facilitated? The responsibility for making the necessary arrangements and working to coordinate the visit with Chinese authorities fell to the President’s staff. On October 13, 2010, three of Nixon’s key aides came to USC to discuss what was involved and how they worked to ensure the visit was a success, especially in terms of trying to ensure positive reporting about the historic trip.

Nixon’s former aides discussed a wide range of issues, including how the President and the Chinese government both originally planned to limit the number of journalists to cover the event. The U.S. contingent eventually required two full planes and included giant figures such as Walter Cronkite. Nixon’s team and Chinese officials sought to carefully manage the schedule and photo opportunities.

Despite all the planning and negotiations, there were still many large uncertainties when the Americans left for China. It was not at all certain that Chairman Mao Zedong would be well enough to meet with Nixon. And the two sides were far apart on what might be included in some sort of joint statement about the visit. Chapin, Brennan, and Higby discuss how these and other matters had the group scrambling throughout “the week that changed the world.

Click here to view the second part of the symposium featuring scholars from USC and the Nixon Center in Washington discussing China’s place in the world today.

To see video from the symposium, please click the play button below..