Wasserstrom, China in the 21st Century: What Everyone Needs to Know, 2010

Wasserstrom tries to strike a balance between the uniqueness and the universalism of Chinese history in the context of world histories. He consistently compares China with the United States, India, Japan, and other countries. He also seeks to understand China by not reducing it to its history and stereotypes, but by recognizing its nuanced and complex situation.

The first chapter provides a perspective on the historical development of Confucianism, including its denunciation in the early twentieth century and its revival on mainland China in recent years. 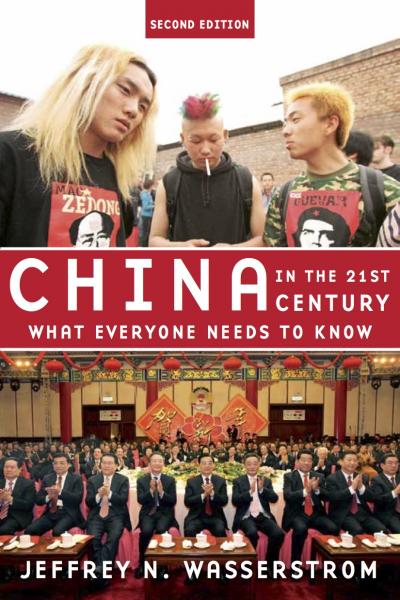 Sections within this chapter include Confucian learning among the populace and its usage by the government, Confucian learning and its relevance to China's modernization program, and connections between Confucian teachings and democracy. Wasserstrom treats Confucian learning as tradition undergoing transformation and adapted to modern times. Chapter 2 discusses the changes that took place within the framework of dynastic cycles and traditional Chinese views toward change; the Chinese empires, especially the Manchu Qing dynasty (1644-1911), and how they dealt with foreign countries/powers and internal dissent; and the importance not to assume a ready continuity between China's traditional past and the Communist present. Chapter 3 emphasizes China's radical and revolutionary twentieth century, from the battle to establish the Republic, to years of civil war, the war against Japan, and finally the Communist years after 1949 characterized by not military, but political campaigns that were every bit as lethal as military campaigns. This chapter also includes four sections on how to properly assess Mao and how Mao is perceived by the government and people in China. Changes brought about in modern Chinese history as well as continuity with the past, in other words, must be recognized and acknowledged.

Part 2, "The Present and the Future," is an assessment of China today and predictions of China tomorrow . Here Wasserstrom provides insight gained from a combination of extensive scholarship and firsthand knowledge. Chapter 4, "From Mao to Now," depicts a current China that is at once authoritarian but also more open than before, especially after the fall of other Communist states. At that time, to avoid similar extinction, the Communist Chinese government began gradual changes that have continued despite its crackdown on democratic movements in the 1980s, the verdict on which the state still has no consensus even today . Wasserstrom uses George Orwell's 1984 (1949) and Aldous Huxley's Brave New World (1932) to illustrate the hard and soft approaches that the Chinese Communist government has exercised in recent years in China. He presents a nuanced discussion of the complexity of understanding Chinese politics, explaining the difficulty of simply dividing the Chinese population into political dissidents and political loyalists as well as the effects that the Internet has had on politics in China. More specifically, he shows that knowledge of high technology has widened the chasm in China between those who have access to free information by dodging Internet censorship and those who do not. The book discusses China's attempt to reshape its international image through hosting mega-events, such as the Olympic Games and the World Fair, and to situate these mega-events in a historical and comparative context; for example, Wasserstrom compares China and India to illustrate the significant impact that hosting these events has had on China. He uses a similar comparative framework to discuss how to situate China in the world of nations, and how China has dealt with tensions along ideological lines, interethnic issues, and state policies. These sections are titled "Is Contemporary China Utterly Unique?" and "What Does China Have in Common with Other Countries?"

Wasserstrom persuasively encourages readers to shed stereotypes of China by situating diversity in China, based on ethnic, regional, or even age differences, in a comparative context and with subtle examples of shifting loyalties and identities in Chinese politics.

China, he indicates, is a more diverse country than meets the eye.

The author also notes that the lack of political freedom and freedom of the press in China leads to different Chinese views of America and different views on many other things, including Tibet.

Chapter 6, "The Future," examines China's military buildup, China's relationship with Taiwan, China's modernization process, challenges to the Chinese government, and the future of China's political system. For each question, Wasserstrom usually provides a comparative and insightful answer, and he refrains from a predisposed position while using a multitude of examples to illustrate his points.

Regarding how China and the United States should view each other if they are both superpowers, Wasserstrom demonstrates with insightful examples that China and America share more similarities than many Chinese or Americans realize. Similarly, on whether China is going to be a military power that dangers the world, Wasserstrom points out the legitimate concerns of China's neighbors and the rest of the world in the face of China's development of its military, but he also presents China's side of the story and its fears of possible invasion by other countries. The People's Liberation Army meanwhile is responsible for maintaining control within China. For some questions such as whether China will become the world's dominant economy, or whether China is likely to become a democracy, there is no simple yes or no answer. To gain a better understanding of China, he notes, one needs to come up with new approaches to view China.