Wampler, ed. Trilateralism and Beyond: Great Power Politics and the Korean Security Dilemma during and after the Cold War, 2011

Do not let the title of Robert A. Wampler's edited volume fool you.
Trilateralism and Beyond may sound like a bland think tank policy paper. It is actually an engaging and thought-provoking collection of 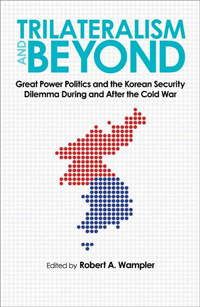 multilingual, multiarchival historical scholarship on a deeply relevant topic, a textbook example of how historians should conduct research on fairly recent events. Based in large part, but by no means entirely, on documents compiled and made available by the National Security Archive Korea Declassification Project, the six chapters focus on the interactions between South Korea, the United States, and Japan, as well as those between North Korea, Russia/Soviet Union (USSR), and China. Since the end of the Korean War, these triangles have bickered among themselves nearly as often as they have tussled with each other. This book joins Tsuyoshi Hasegawa's 2011 collection The Cold War in East Asia: 1945-1991 as an example of the rapid and fruitful progression of scholarship on the recent history of northeast Asia. Though significantly shorter, and far more focused, Trilateralism and Beyond is in fact the superior work, at least when it comes to the Korean peninsula, the region's powder keg since 1950.

In the first chapter, William Stueck demonstrates how, beginning with Dwight Eisenhower, numerous American presidents have sought to reduce the U.S. troop presence south of the demilitarized zone (DMZ). Fears about North Korean and Communist Chinese strengths and intentions prevented Eisenhower, and most of his successors, from making significant withdrawals. Only Richard Nixon, in the waning years of American involvement in South Vietnam, and George H. W. Bush, in the wake of the end of the cold war, succeeded in carrying out sizeable cutbacks. The chapter notes how the ambivalence was by no means one-sided, recounting the longstanding opposition of significant segments of the South Korean population to the American military presence. Stueck concludes with the observation that "ultimately, the alliance survived because rationality prevailed over ideology and emotion," particularly during the rocky interactions between presidents George W. Bush and Roh Moo Hyun (p. 41).

Stueck's contribution serves as an excellent background primer for Seung-Young Kim's chapter on the role of the United States in South Korea's democratization. Kim argues rather persuasively that efforts to remove U.S. military personnel undermined this process by reducing American leverage over the Republic of Korea's (ROK) leaders. Nixon's withdrawal of twenty thousand U.S. troops coincided with Park Chung Hee's encroaching authoritarianism. Jimmy Carter's frequently stated intention to remove all U.S. forces deprived him of the ability to encourage democratization after Park's 1979 assassination, or prevent the subsequent Kwangju massacre of pro-democracy demonstrators. Conversely, Ronald Reagan convinced Park's authoritarian successor Chun Doo Hwan to release democracy activist and future president Kim Dae Jung from prison in 1982, encouraged "an incremental liberalization" of South Korean politics and society, and prodded Chun to allow free elections in 1987 (p. 68). Ironically, the best way to aid the military dictatorship's opponents was to remain steadfast to the occupation to which most of them so deeply objected.

The two chapters by Yasuyo Sakata and Michael W. Chinworth, Narushige Michishita, and Taeyong Yoon most closely resemble the think tank policy papers at which the volume's title hints, though this is by no means a criticism. Sakata points out that cooperation and coordination between South Korea, the United States, and Japan concerning the Six-Party Talks over the North Korean nuclear program is fragile, of recent origin, and "born out of necessity" (p. 117). The U.S.-mandated shotgun marriage between South Korea and Japan in the 1990s only became truly cooperative in the early 2000s. Sakata holds out qualified hope for trilateral coordination on larger issues, though Chinworth, Michishita, and Yoon are less sanguine, emphasizing distrust between Tokyo and Seoul and the essential role of the United States as mediator between the two putatively friendly neighbors. In their views, the divergent economic and security interests of the three democracies make a formal security treaty deeply unlikely, if not impossible. U.S. attempts to foster "hasty policy changes" along these lines would surely backfire (p. 155).

If the extent of cooperation within the Seoul-Washington-Tokyo trilateral is in dispute, there is no such debate regarding the relationship between Pyongyang, Moscow, and Beijing. Simply put, there is no trilateral cooperation there, and there has not been for nearly six decades. Wampler saves the best for last. Gregg Andrew Brazinsky and Sergey Radchenko provide brief yet deeply researched and cogently argued summaries of Chinese and Soviet policies toward both Koreas. Each demonstrates why trilateral cooperation is and has long been an utter impossibility. According to Brazinsky, over the past four decades, China's leaders have methodically succeeded in improving relations with both North and South Korea, largely at the expense of Moscow, though also to the detriment of Japan. During this period, China has based its regional policy on the dual goals of "stability" and "influence," building the latter in part by achieving the former (p. 185). To reduce the chances of war, China joined the United States in supporting South Korean democratization, and played the leading role in "slowly acclimating the North Koreans to the realities of the post-cold war world" (p. 179). The People's Republic of China can cooperate with the United States in pursuit of stability, though their mutual efforts to increase influence, particularly with the South Koreans, are inevitably zero-sum and lead to rivalry between the two great powers.

Using both Soviet and American archival materials, as well as some published Chinese-language sources, Radchenko argues that the Soviets were far less deft than the Chinese, particularly from 1985 until 1991. The auguries appeared positive at first. Mikhail Gorbachev took power at a time when Kin Il Sung assiduously and ostentatiously sought closer relations with the Soviets as the Democratic People's Republic of Korea (DPRK) began to feel abandoned by the Chinese, who were moving ever closer to the United States. Yet propping up the DPRK was also a low priority for the Soviets, who required improved relations with the South Koreans and the Japanese, as well as the Americans, in order to acquire high-technology goods. Kim needed a revival of the close Communist cooperation of the early cold war. He feared that the Soviets wanted to "open the doors" of his Hermit Kingdom, and protested mightily when the USSR normalized relations with the ROK in 1991 (p. 204). Yet even Kim had to accept that he lived in changing times, and reacted in a far more muted manner when China recognized South Korea in August 1992. Kim was not solely to blame. The Soviets had pledged to "never" recognize South Korea, making Gorbachev's 1991 about-face particularly shocking.

Radchenko contends that the Soviets were not alone in mishandling the DPRK. Korea was also a low priority for the George H. W. Bush administration. The author's most intriguing claim is that Bush missed a chance to reach out to North Korea during the brief critical period when the cold war structure that had created, nurtured, and sustained that regime was collapsing. Had this occurred, the current regional situation could be very different. North Korea might have been forgotten by the major powers in 1991, albeit for very understandable reasons, but "a problem forgotten is not a problem solved" (p. 208).

Trilateralism and Beyond should be required reading for anyone interested in recent Korean history, northeast Asian security studies, or alliance politics. It is a short, sweet collection deserving of a wide audience. One can only hope several of these chapters, particularly those by Kim, Brazinsky, and Radchenko, find their way into future monographs.

Citation: Jeff Crean. Review of Wampler, Robert A., ed., Trilateralism and Beyond: Great Power Politics and the Korean Security Dilemma during and after the Cold War. H-War, H-Net Reviews. March, 2013.
URL: https://www.h-net.org/reviews/showrev.php?id=36456