Video: Q&A Session Following the Screening of "The Revolutionary" 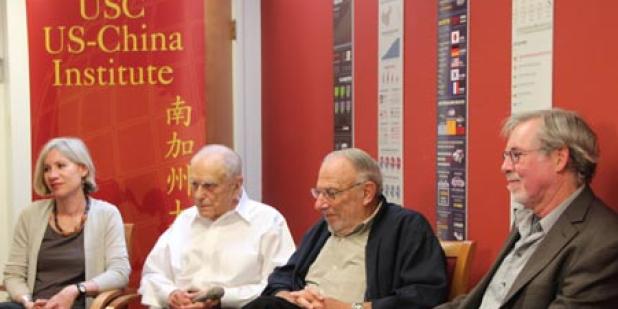 On June 12, 2012, the USC U.S.-China Institute, School for Cinematic Arts, Center for Business Education and Research, and the Asia Society hosted a screening of The Revolutionary, a film focusing on the experiences of Sidney Rittenberg, an American who learned Chinese in the U.S. Army, joins the Chinese Communist Party, and participates in the revolution and efforts to build a new China. Rittenberg's American heritage, however, resulted in him being labelled a spy. He was imprisoned and held in solitary confinement. He was released in the mid-1950s and worked to support China's broadcasting efforts. During this period he remarried and began a family, living a privileged life. When the Cultural Revolution broke out, he became an enthusiastic participant. In the process he won powerful enemies and he was again imprisoned, not regaining his freedom until after Chairman Mao died and Mao's widow Jiang Qing was herself arrested. Altogether, Rittenberg spent sixteen years as a prisoner in China. He and his family left China in 1980. Rittenberg and his wife have subsequently worked as advisors to American and other firms eager to do business in China.

After the screening, Rittenberg and the filmmakers, Irv Drasnin, Lucy Ostrander, and Don Sellers engaged the audience in a candid discussion of the film and the issues it raised. Rittenberg’s story would be just a footnote to history, except for his exceptional intellect, uncompromising honesty, and engaging . Over a five-year period, award-winning former-CBS and PBS journalist and China specialist, Irv Drasnin, interviewed Rittenberg to produce a compelling, complex and unique understanding of the 20th century's biggest revolution. From Rittenberg's first meeting Mao in the caves of Yan’an, to his becoming famous and powerful during the Cultural Revolution, to his battling insanity in solitary, his journey and his profound insight illuminate a much greater history—a history few Chinese are aware of, let alone many Americans, told by an American who was there.

Click on the play button below to see the presentation..

While most people have had one life, Sidney Rittenberg has had three. Born to a prominent Jewish family in Charleston, South Carolina in 1921, his early adult years were spent as a successful labor organizer, and a member of the American Communist Party.

Drafted during World War II, he was found to have great potential as a linguist, and was sent to Stanford to Japanese. Thinking this would mean he'd be stuck with the occupation forces in Japan, Sid connived his way into the small , where he fell in love with the language.

He was sent to China as the Japanese were surrendering, and eventually had himself discharged there during the mounting fighting between the Chinese Nationalists and Communists. He made his way on foot to the Communist headquarters, the caves of Yan'an, and offered his services.

Sid worked for the revolution as a trusted translator, but was accused by Stalin of being part of an international spy ring. He was imprisoned in solitary confinement for six years. When Stalin died he was released, and went back to work, marrying and a Chinese family.

Unlike many of his era, he supported the Cultural Revolution and rose to prominence as a speaker. He also became more active politically, and eventually became the head of the Broadcast Administration, a position of power never before or after being held by a foreigner. But he ran afoul of Jiang Qing, Mao's wife and member of the Gang of Four, and was sent to solitary for another 10 years.

In 1980 Sid returned to the United States with his family. He slowly built a new life for himself, eventually becoming a successful liason between American businesses and China. Rittenberg and Amanda Bennett told his story in The Man Who Stayed Behind.

Stourwater Pictures was pleased to have had the opportunity to work with Irv Drasnin on The Revolutionary. Irv's career in documentary filmmaking and broadcast journalism includes thirty-five years at CBS News and Public Television with extensive experience in China. His thirty documentaries include Misunderstanding China (1972), Shanghai (1974), Looking for Mao (1983), and China After Tiananmen (1992). Among his many awards for outstanding documentary film are the DuPont-Columbia Award (twice), the Director’s Guild, the Writer’s Guild (twice), the American Film and Video Festival (twice) and Christopher awards (twice). Mr. Drasnin holds a Master’s Harvard in East Asian Studies with a specialization in China and taught the documentary film program at Stanford (1980-82). He also was a founding member of The China Council of the Asia Society and its co-chairman (1981-83).

Lucy Ostrander, an award–winning documentary filmmaker began to receive accolades for her work with her Masters' thesis from Stanford University, Witness to Revolution: The Story of Anna Louise Strong. In producing the film, she became the first American student to work with the China Film Co–Production Corporation. The film received a national PBS broadcast, and won a Student Academy Award, the Nissan Focus Award and a CINE Golden Eagle. In 2005 she was a recipient of an Artist Trust Fellowship. Over the course of 25 years, her documentaries have focused primarily on Northwest history and include East of Occidental, Home from the Eastern Sea, Finding Thea, The Red Pines, Island Roots, and Fumiko Hayashida: The Woman Behind the Symbol.