Panelists examined the issues driving the protests in Hong Kong, the social composition and motivations of the protesters and counter-protesters, and how the various sides are using media to reach local, mainland and international audiences. 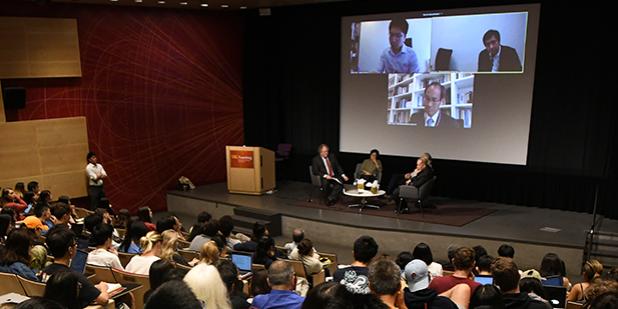 Panelists
Moderated by Clayton Dube, Director of the USC U.S.-China Institute.
This event was part of Communication 310 course, “Media and Society,” taught by Professor Robert Scheer. Prof. Scheer joined the discussion. There were also questions from the audience, but as is our norm, we do not include them here.
Video of the presentations and the discussion among the presenters is below. A few highlights:
Clayton Dube provided an overview of the recent protests in Hong Kong, noting the vital role played by millennials and those born since the 1997 handover. He pointed to the deep suspicion protestors have of both the Hong Kong and Beijing governments.
Click here for the full text of the proposed (and now withdrawn) extradition bill.
Other useful documents: Joint Declaration by the PRC and UK (1984);  Basic Law of the Hong Kong Special Administrative Region (1990)
Fiona Ng noted that her family was one of those who migrated to the U.S. ahead of the 1997 handover. She noted the ways she followed events in Hong Kong and discussed what she saw and learned there during a recent reporting trip. She noted the creativity of the protestors, which included new songs or new versions of old songs.
Robert Chung discussed the low opinion most Hong Kong people have of the performance of the local government and the chief executive, Carrie Lam. He also showed that while a majority of people opposed the extradition bill, opposition among young people was overwhelming. People with higher levels of education were more critical than others of the government.
Francis Lee's surveys showed that beliefs about the legal system on the mainland were an important driver of attitudes toward the extradition bill and the Hong Kong government that proposed it. He noted that six in ten did not believe a fair trial was possible for those extradited to the mainland. His surveys showed that most people were critical of the use of force by the police and, as a result, really wanted an independent investigation of the policies and actions of the police. 40% felt that some protestors had used excessive violence.
Samson Yuen noted the many ways that people participated in the protests: marching, contributing money or assistance, and publicizing the concerns and activities. Some 75% of the protestors he surveyed were college students or college graduates. About half identified as middle class and a smaller share identified as being of a lower economic class. His research showed the essential role played by social media in mobilizing and spreading news of the protests.
Robert Koepp highlighted the current economic impact of the demonstrations. He noted that Hong Kong is dependent on the mainland for most of its tourists and that mainland visitors had essentially stopped coming and buying luxury goods. He also pointed to drops in the Hong Kong stock market and in property prices. At the same time, he noted that there was not capital flight. Koepp observed that Hong Kong has a functioning judicial system and that rule of law is the norm, pointing to the respect shown the court injunction against hampering the flow of people at the airport.
The discussion included questions about the motivations of demonstrators and the centrality of political questions. There was also discussion of how the demonstrations affected conversations among friends and colleagues and the perceived role of violence in getting demands met or in radicalizing protestors.
The presentations and discussion were lively and rich. Please share these videos with others.

Gary Rieschel, founder of Qiming Venture Partners, takes a look at how innovative China has been and how the US-China rivalry may spur or stifle innvation. 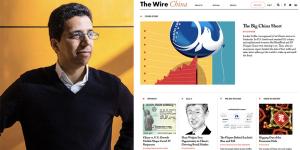 Please join the USC U.S.-China Institute for an online discussion with Nick Cull to look at the impact of the Covid 19 crisis on the battle of images between the United States and China.