This book is the result of the fourth meeting in a series of conferences involving Chinese, Japanese, and Western scholars on elements of 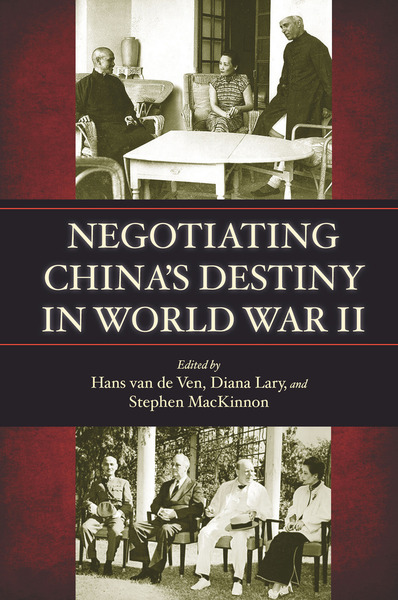 Chinese diplomacy in the World War II era. The carefully edited conference papers give new insight into the problems faced by the Nationalist government as it tried to deal with allies and neighbors in a manner that would protect and enhance China’s interests. Since there were competing interests at play, these negotiations were intricate and ongoing. The majority of the essays are by East Asian scholars who have access to sources unavailable to many in the field because of their ownership by Chinese archives.

The collection highlights new insights into the complexity of issues facing Chiang Kaishek (Jiang Jieshi) and offers a reappraisal of his lesser-known diplomatic efforts. Issues that have been the focus of Chinese relations in the past are, for the most part, ignored by the contributors. Instead, the essays point to the fine line that the Chinese walked in dealing with neighbors—for example, India and Vietnam—who were trying to prevent the return of a European colonial power. This fine line was offset by the need for China to negotiate with those colonial powers in order to receive supplies and recognition as an ally in World War II conflicts.

The collection’s focus is on the diplomacy of Chiang, whose primary goal, after survival of his government, was the recognition of China’s role on a global scale. Prewar China had a minor international status and was viewed as a weak and divided country. As a result, relations with any or all of the Allied powers were important, both for receiving assistance in war efforts and for being acknowledged as a major player in the diplomatic process, an aspect not always recognized by some of the Allies. Yet, in addition to problems with its southern neighbors, China also experienced problems in its established relationship with the Soviet Union. In the early war years, the Soviets provided China with military aid and advisers. However, they were also interested in developing the Chinese Communist Party (CCP), which, at least, they could play against the Nationalists. Relations with the United States were likewise important as a source of aid and recognition. Some of the essays highlight lesser-studied aspects of these associations, like the relationship between Canada and China. Canadians began to define their own diplomacy, not necessarily parallel to that of Britain. Constant juggling of interests closer to home with those of the Allies, which were often contradictory, made for almost a constant focus on foreign affairs. The claim for a “unified” China was problematic, since, as is pointed out in some of the essays, Chiang had to deal with his own subordinates trying to make policies to their advantage.

The book includes an informative introduction and conclusion. It is organized into three sections: “The Old Empires and the Rise of China,” “Negotiating Alliances and Questions of Sovereignty,” and “Ending War.” The first two parts have five essays each with three in the third. The variety of topics is impressive with many aspects that are not typically covered, such as a trip to Tibet by a newly appointed trusted Guómínd?ng (GMD) official who was named director of the Mongolian and Tibetan Affairs Commission’s office in Lhasa, or the issue of refraining from, or declaring, war on Japan as part of the negotiating process. Also an interesting account of China’s planned postwar policy toward Japan is included, as is an account of the 1952 Peace Treaty between the two.

Chiang was often frustrated with the other leaders’ insistence on prioritizing their issues and needs rather than those of an Allied front in the war that would recognize and benefit China. Most of his wartime efforts were attempts to enhance and achieve recognition of China’s importance, strategically and otherwise, to a united war effort. He achieved his goals when China was declared as one of the “Big Four” Allies at the Cairo Conference, and when China became a founding member of the United Nations and a permanent member of the Security Council.

Problems at the war’s end, as some of the contributors note, were as complicated as those at the start: in particular, determining how to establish control over areas alienated during the war by the Japanese or the CCP, whose influence had expanded greatly during this time, was a difficult endeavor. In addition, the Soviet Union occupied Manchuria and parts of inner Mongolia, which were part of Chinese territory. Some contributors also explore the issue of sovereignty as opposed to suzerainty. Others examine the areas controlled by European powers, such as Hong Kong, Vietnam, and India, among others, and show how their relationships affected China. In addition, the Americans wished to demobilize their forces and Chiang wished to keep the Americans involved in China until his situation had stabilized, a process complicated by the evolving Cold War, which focused on Manchuria. This postwar emphasis on the Cold War has overshadowed many of the Chinese efforts explored in this book.

The goal of the conference was to increase understanding of China’s role in the Second World War. The organizers hoped to develop a common understanding of the war from many points of view. Although this goal has not yet been fully achieved, these conferences have led to a deeper appreciation of the extent to which the war shaped much of the events of postwar China and Asia.

Since the authors assume some knowledge of the Sino-Japanese War, which was only declared after the attack on Pearl Harbor, this book will not appeal to the novice. Scholars whose focus is East Asian history or the Asian theaters of World War II will benefit from this collection, as will those whose research centers on the fields of diplomatic or military history. Copious references are cited, many of which are Chinese- or Japanese-language sources not always familiar to Western scholars. This is an interesting and informative book especially for those intrigued by China in World War II.