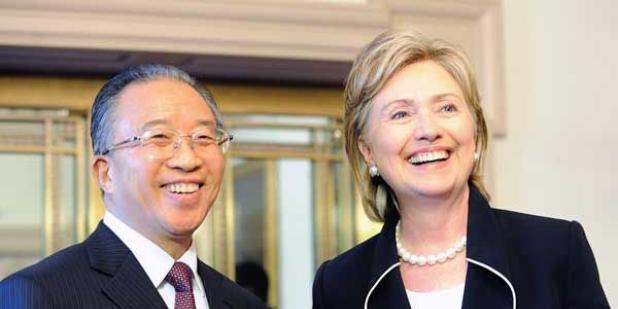 For other documents and articles on Hillary Rodham Clinton, click here.

It is a privilege to open this inaugural meeting of the Strategic and Economic Dialogue between the United States and China. I am especially pleased to join my co-chair, Secretary Geithner, and to welcome State Councilor Dai and Vice Premier Wang. I look forward to resuming the productive discussions I had with Councilor Dai, President Hu, and Premier Wen on my trip to China in February, and to build on President Obama and President Hu’s meeting in London.

This is both a culmination, and a beginning. A culmination of actions taken by our predecessors 30 years ago, when the United States and China established formal diplomatic relations, and Deng Xiaoping launched China’s economic reform and opening to the world. What followed was a blossoming of Chinese economic growth and diplomatic engagement that has allowed our nations to reach this place of opportunity today.

This dialogue also marks a beginning – the beginning of an unprecedented effort to lay the foundation for a positive, cooperative, and comprehensive U.S.-Chinese relationship for the 21st century.

That so many members of President Obama’s cabinet are here reflects our belief that a stronger relationship will yield rewards, not only for our two nations, but for the world beyond.

For in the decades ahead, great countries will be defined less by their power to dominate or divide than by their capacity to solve problems. It is this reality – and the fact that no country can solve today’s challenges alone – that demands a new global architecture for progress.

Although past relations between the United States and China have been influenced by the idea of a balance of power among great nations, the fresh thinking of the 21st century can move us from a multi-polar world to a multi-partner world. And it is our hope that the dialogue we initiate today will enable us to shape that common agenda.

To meet these threats, we must find common ground and work together in common purpose, even as we may disagree on certain issues.

As we’ll hear from the President later this morning, the Obama Administration is committed to broader engagement – to using robust diplomacy and development and working with and beyond government to solve regional and global problems and take advantage of the unprecedented opportunities they present.

When I was in China in February, it was my first time back in almost a decade. And I was struck, as many visitors are, by the transformation that had taken place. Driving on the third ring road in Beijing, I felt like was watching a movie in fast-forward. From a few high rise buildings on my last trip, to a gleaming Olympic complex and corporate skyscrapers today. From millions of Flying Pigeon bicycles navigating the streets, to cars of every model traversing modern thoroughfares. And for those traveling to Shanghai, an already cosmopolitan city soon to add the Shanghai Expo.

All are testaments to China’s dynamism and growth. And we welcome these signs of progress.

We also welcome China’s role in promoting peace and stability in the Asia Pacific. Over the past 30 years, the United States has helped foster security in the region – a critical factor in China’s growth, and an important strategic interest of our own. In the future, we will remain actively engaged in promoting the security of Asia. When misunderstandings or disagreements arise, we will work through them peacefully and through intensive dialogue.

This Strategic and Economic Dialogue differs from past dialogues in scope, substance, and approach. It is comprehensive by design, meant to enlist the full range of talent within our governments and to include cross-cutting challenges that are neither bureaucratically neat, nor easily compartmentalized.

With this dialogue we are laying, brick by brick, the foundation of a stronger relationship – improving lines of communication; increasing understanding; setting priorities; and creating a work plan.

Our agenda will focus on several areas:

First, the economic recovery. Repairing the global economy is a priority for both the United States and China. We have taken aggressive action at home to stimulate our economy and stabilize our financial institutions. China has taken similarly bold steps and we both agree that further economic and financial cooperation is necessary for global recovery.

Second, climate change and clean energy. As the world’s two biggest emitters, we must demonstrate to the developed and developing world that clean energy and economic growth can go hand-in-hand. We are already involved in promising partnerships. In Beijing, I toured a geo-thermal plant that is a true U.S.-Chinese collaboration. General Electric has provided high-tech equipment to produce heat and power with half the emissions, and far less water usage than the coal plants that are typically relied on. And Chinese businesses build the steam turbines that help to power the plant. This plant saves costs and provides clean energy – including heat for the U.S. Embassy.

Third, security challenges. I just attended the ASEAN conference in Thailand, where the North Korean regime’s recent provocations were a subject of great concern. China and the United States both appreciate the dangers of escalating tensions and a prospective arms race in East Asia; and the proliferation of weapons of mass destruction.

Already, China and the United States have worked together to contain dangerous actions on the part of North Korea. We are grateful for the Chinese government’s leadership in establishing the Six Party Talks and for its close cooperation in response to North Korean missile launches. In this dialogue, we will discuss ways to work jointly to persuade the regime to agree to denuclearization and end its international isolation.

We will also discuss our common concerns about the nuclear weapons capability of Iran, and explore ways to address violent extremism and promote stability in Afghanistan and Pakistan.

Fourth, development. Under President Obama, development, like diplomacy, is an equally important pillar of American foreign policy. Many of the world’s threats stem from lack of opportunity which, in turn, leads to poverty, social erosion, and political instability. By addressing global scourges such as hunger, illiteracy, disease, and economic marginalization from the bottom up, and by insisting on accountability and adherence to the rule of law, we can widen opportunity and prosperity for more people in more places.

None of these problems will be easy to solve, and results won’t happen overnight. We will not always see eye-to-eye, as is the case with human rights, where the United States will continue to be guided by the ideal that the rights of all people must be respected. Still, solutions to many of today’s global challenges are within reach if we work cooperatively where our interests intersect, and are honest with each other when they don’t.

A well-known Chinese saying speaks of a sacred mountain in northern China near Confucius’ home. It says: “When people are of one mind and heart, they can move Mt. Tai." We cannot expect to be united at every turn, but we can be of one mind and heart on the need to find common ground as we confront the shared challenges of the 21st century. The Obama Administration has embraced this dialogue with China early and energetically because we want to see it to fruition. This is an issue of great importance to me as Secretary of State, and I know the same is true for my colleagues and for our President.

And now, it is my great honor to introduce Vice Premier Wang.

Other documents and articles on Hillary Rodham Clinton: