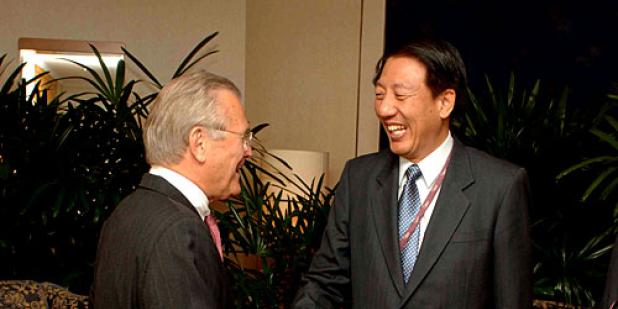 This conference is impressive, and it’s filling an important need.  And certainly we congratulate you and thank you for your foresight and your leadership.

It is certainly a pleasure for me to be back in this vibrant and historic city.  I want to thank the government and the people of Singapore for their very gracious hospitality and the excellent dinner last evening.  I commend Prime Minister Lee for his thoughtful remarks.  Certainly they provided an excellent foundation for the discussions that we’ll be having in the days ahead.

Singapore’s emergence as a key contributor to security in the region is both significant and welcome.  The Strategic Framework Agreement signed last summer between our two nations is increasing the depth and the texture of our partnership.

I want to express my deepest sympathies for the people of the United States to Minister Sudarsono and the people of Indonesia in the wake of the earthquake last week.  At President Bush’s direction, the U.S. Pacific Command under Admiral Fallon is working with other nations to support the Indonesian government in its efforts to bring relief to the survivors and the injured.

Since the inaugural session in 2002, this Shangri-La conference has become the premier forum for exchanging views on security and progress in the Asia-Pacific region.

One of the reasons that the Shangri-La Dialogue has been so successful is because it strives to be inclusive.  I believe John said that we have representatives here from more than 20 nations today -- including nations that over the years have at times been adversaries.  These gatherings are an important reminder of just how far many nations have come, not only in economic and political development, but in achieving a good measure of reconciliation after the conflicts of the past century.

Today we face a situation in the Pacific, and indeed globally, where, paradoxically, more nations are freer then ever before, yet freedom is increasingly under assault -- by the designs of violent extremists and rogue regimes.

In the present security environment, cooperation among free nations is not simply desirable, it’s critical.  It’s instructive, it seems to me, to reflect on some of the historic shifts in this area -- in America’s approach to long-standing allies, as well as new multinational partnerships -- and to consider some of the challenges that we’ll be facing in the period ahead.

First, it’s useful to note that in the past five years, in terms of defense and security cooperation, the United States has done more things, with more nations, in more constructive ways, than at any time in our history.  Many of our partnerships date back to the early years of the Cold War, some as far back as World War II.  These relationships have been updated and modernized in recent years, in keeping with the new circumstances of the 21st Century.  And other relationships barely existed, if at all, merely a few years ago, yet are growing in importance today.  Consider our ties with:

One indication of how far things have progressed with Pakistan, in a relatively short period of time, is that just over a month ago a Pakistani admiral took command of a combined naval task force that has included ships from the United States, the United Kingdom, France, Germany, Australia, Spain, Canada, Italy, Turkey, and Portugal.  The task force patrols the waterways of the Middle East from the Gulf of Oman to the Southern Border of Kenya in the Indian Ocean, as part of a campaign against piracy and terrorism.

This joint training and security cooperation has proven increasingly valuable and indeed necessary in recent years.

Consider that one of the reasons the United States and Thailand were able to respond so quickly, and work together so seamlessly, after the catastrophic Tsunami, was that we have had upwards of two decades of joint training and collaboration at the annual Cobra Gold exercises.  These exercises have expanded to include several other Asian nations, with a new focus on peacekeeping and on humanitarian disaster response -- a focus that has been validated by more recent events in this part of the world.

The breadth and depth of these activities reflect an important and constructive trend:  for much of my adult lifetime, security and stability in the Pacific was maintained essentially by a network of bilateral defense relationships between the United States and our allies and partners.  This was notably unlike the situation in Europe, where we had a relatively large and more formal alliance – NATO -- the North Atlantic Treaty Organization.  But now we see an expanding network of security cooperation in this region, both bilaterally between nations and multilaterally among nations -- with the United States as a partner.  We see this as a welcome shift.

We see this at work in the Straits of Malacca, where Singapore, Malaysia, Thailand and Indonesia are coordinating patrols to combat the ancient scourge of piracy on the high seas.

This type of maritime security cooperation is critical to the success of the Proliferation Security Initiative -- put forward by President Bush, an initiative that now has the support of more than 70 nations, in its efforts to try to stop dangerous weapons and material from being transported to or from terrorists and rogue regimes.

Inclusive, multinational institutions and activities such as this conference, as well as the ASEAN Regional Forum, and the Asia-Pacific Economic Cooperation (APEC), are leading the way.  Of course, these institutions are not formal military alliances, like NATO, or treaties, like the World Trade Organization, that have binding commitments.  But they do provide arenas for dialogue where diverse nations, with shared interests, can engage each other in different and flexible ways and fashion constructive approaches to common problems.

The United States, for our part, has also looked to modernize our traditional alliances and relationships.

Consider that South Korea is no longer the devastated, impoverished nation it was at the end of the Korean War.  It has a large, capable military.  It is properly seeking greater responsibility for its own defense.  So while we have upgraded our overall deterrent capabilities on the Korean Peninsula and in North Asia generally, we are able to reduce and adjust the U.S. military footprint in South Korea.

So too our relationship with Japan.  A month ago, Secretary Rice and I met with our counterparts -- Minister Nukaga is here today -- to sign an historic agreement representing probably the most significant realignment of U.S. forces there in many decades.

The changes that have taken place in Japan, just within the span of my lifetime, have been truly remarkable.

At the end of World War II -- when most of Europe and much of Asia lay in ruins -- no one really could have imagined what course the world would take in the following 60 years.  So, too, today.  It's difficult to imagine what the world might look like in even 20 or 30 or 40 years from now, and what types of challenges we may face.

We do know that what Asia will look like 50 years from now will depend importantly on the choices that are made by the countries represented in this room.  And we do have choices.

The emergence of Japan, South Korea, and Australia as important players in global, as well as regional security, has been one of the welcome international developments of recent years, and the extent of their contributions in the years to come can have a significant impact on the stability and prosperity of the Pacific in future decades.

Consider as well the growing threat of ballistic missiles in the hands of rogue regimes, by which some nations seek to intimidate neighbors.  The U.S. and Japan are working closely together to field a missile defense system to ensure that this kind of blackmail will not succeed.

The way ahead for other nations will be something that our country will watch closely.  Consider Russia -- a nation with vast natural resources, an educated people, and a rich heritage of scientific and cultural achievements.  Like our people, they are threatened by violent extremists.  They are a partner in some security issues, and, on the whole our relationship is better than it has been in decades.  But in other ways Russia has been less helpful -- as when they seek to constrain the independence and freedom of action of some of their neighboring countries.

And consider China, also represented here at this conference.  The Chinese people are of course educated, talented, and live in a nation with great potential.  China has a strong economic growth rate today and an industrious workforce.  But there are aspects of China's actions that can complicate their relationships with other nations.  As we discussed last year, a lack of transparency with respect to their military investments understandably causes concerns for some of their neighbors.

Consider North Korea.  The future of the Pacific Rim will depend also on the path North Korea takes.  Will it continue to starve and repress its people, threaten its neighbors, and pursue nuclear weapons? Or will it, at some point, do what other nations have done, such as Libya, have done and choose a path which leads back to membership in the community of nations?

With regard to violent extremists in the region, our friends and partners face a complicated set of challenges:  whether to openly combat the messages of hate, intolerance, and incitement -- that can in some cases gain traction -- or to try to placate and accommodate those whose vision of the future means that it is acceptable, even desirable to kill innocent men, women, and children if they don’t agree.  Only by opposing the small minority of violent extremists at every level will free people be successful.

And of course, in addition to the choices made by other countries, there are the choices to be made by the United States.  From time to time, in past decades, some of the people in the United States have questioned whether America should be engaged in the world.  We’ve had strains of isolationism in our country which we are all aware of.

But the United States is, and always will be, a Pacific nation.  We must, and we will, lean forward and stay fully engaged in this part of the world.

When you think about it, the transformation of much of the Asia Pacific region within the span of my professional life this past half-Century -- from war to reconstruction to reconciliation, from poverty to prosperity and growth, from dictatorships to representative political systems -- it has been nothing short of remarkable.

And by continuing to work together in constructive ways, while mindful and respectful of different perspectives and the different histories and the different interests and the different circumstances of each country, we can ensure that the coming decades in this Hemisphere it will be freer, more peaceful, and more prosperous for all of our citizens, and indeed for generations to come.

I thank you very much and would be happy to respond to some questions.