This collection of speeches, edited by National Security Advisor Robert O’Brien includes many of the speeches that are already a part of the USC US-China Institute documents collection. 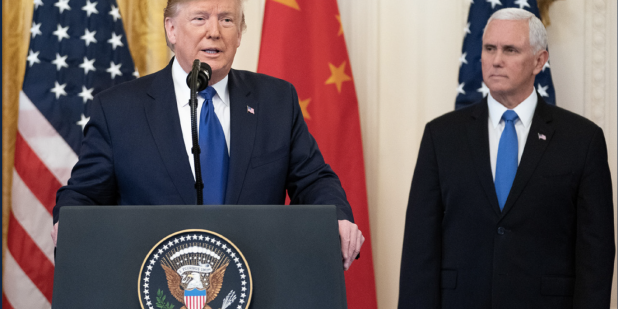 For decades, Donald J. Trump was one of the few prominent Americans to recognize the true nature of the Chinese Communist Party and its threat to America’s economic and political way of life. Now, under President Trump’s leadership, the United States is taking action to protect our nation and its partners from an increasingly assertive China. We are no longer turning a blind eye to the People’s Republic of China’s conduct nor are we hiding our criticism of its Communist Party behind closed doors.

The speeches included in this book, starting with Vice President Mike Pence’s groundbreaking remarks on October 2018 and ending with President Trump’s call to action at the 75th session of the United Nations General Assembly, are a key component of the Administration’s effort to protect the American people. Until now, senior American officials had never spoken publicly with such candor and consistency about the challenge posed by China to our nation. Earlier this year, President Trump asked four of his most senior national security officials, Robert C. O’Brien, Christopher Wray,

William Barr, and Michael Pompeo, to explain current U.S. policy on China to the American people. Over the summer of 2020, they did so in a series of speeches delivered around the country.

Collectively, the remarks contained in this book achieve several important objectives. They educate our citizens about the threat posed by the Chinese Communist Party to their livelihoods, businesses, freedoms, and values.

These speeches also alert our allies and partners so that they, too, should stand up for their own people, and for our mutual interests and values. The competition with which we are faced is not China versus the United States. It is the Chinese Communist Party, with its MarxistLeninist and mercantilist vision for the world, versus freedom-loving people everywhere.

These high-level speeches serve to combat the propaganda machine at the heart of the Chinese Communist Party’s global strategy. President Trump understands that it is past time for America to counter China’s messaging about the supposed strengths of its authoritarian model.

In his 2018 address to the Hudson Institute, Vice President Pence discussed the whole-of-government approach that the Chinese Communist Party is employing to advance its influence in the United States, using political, economic, military, and propaganda tools.

Following Vice President Pence’s address, Deputy National Security Advisor Matthew Pottinger spoke to a worldwide Chinese audience about the populist democracy movement that began a century ago in Beijing and is the proud heritage of the Chinese people. He demonstrated that Chinese history contains another path for China’s people. Next, Ambassador O’Brien explained the ideology and global ambitions of the Chinese Communist Party to a business forum in Phoenix, Arizona. Many in the West, especially in the business community, are not aware that China today is one of the last few Marxist-Leninist nations on earth.

FBI Director Wray followed with an exposé of the pervasiveness of the People’s Republic of China’s espionage and intellectual property theft from our government, our companies, and our partners. He noted that such theft constitutes one of the greatest wealth transfers in human history.

Attorney General Barr, for his part, warned the American business community of its obligation to protect our national security notwithstanding the blandishments of the Party and the lure of the Chinese market. Secretary Pompeo concluded the series by outlining what has become the most significant shift in U.S. foreign policy in a generation. America’s diplomats and policy makers, he explains are rising to China’s once-in-a-generation challenge and confronting the threat across the entire diplomatic spectrum.

President Trump’s two speeches, from May and September 2020, hold the Chinese Communist Party accountable for the Covid-19 pandemic. The President made clear that Beijing’s blunders no longer affect only the Chinese people, as they did under Mao Zedong. They impact the entire world. President Trump points out that beyond the Covid-19 pandemic, China’s environmental devastation in the Pacific and illegal over-fishing in every ocean are but two examples of how China treats the rest of the world.

On the occasion of China’s ending of the “one country, two systems” construct that had guaranteed Hong Kong’s freedom until 2047, the President announced a range of significant penalties, noting the “plain facts [of what China did] cannot be overlooked or swept aside.” President Trump made plain in his May speech, “The United States wants an open and constructive relationship with China, but achieving that relationship requires us to vigorously defend our national interests.” This book explains what President Trump means by his call for a vigorous defense of our national interests vis a vis China.

The Chinese Communist Party prefers not to have the information and messages contained in this book shared. It does not want people around the world to know what the Party really believes, is doing, and is planning.

Taken together, the speeches herein are similar to U.S. diplomat George Kennan’s 1946 “Long Telegram” to the State Department that outlined his views on the Soviet Union. This book is different from the “Long Telegram” in two important respects. First, unlike Kennan’s case, written by an envoy at post, this book contains the words and policies of the President and his most senior officials. Second, given China’s population size, economic prowess, and historic global ambitions, the People’s Republic of China is a more capable competitor than theSoviet Union at its height.