Tilt, The Struggle for Sustainability in Rural China: Environmental Values and Civil Society, 2010

Contradictions on Sustainability in Rural China 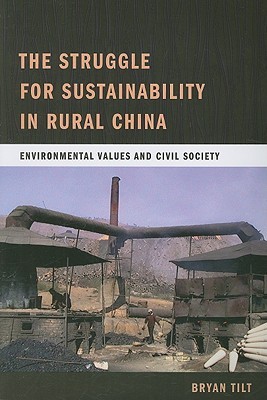 Panzhihua, and its nearby township, Futian, as the research object, examining the conflicting situation between industrial development and environmental protection, and an emerging civil society in rural China. As an anthropologist, Tilt was very observant during his seven months of ethnographic work periodically between 2001 and 2006 in Futian County. His solid understanding of the political economy of contemporary rural China adds to the strength of his analysis when he contextualizes the rural environmental issues in the history of China since the Reform and Opening in 1978.

In his opening chapter, Tilt discusses the rationale of choosing Futian Township as the area of his study. Futian Township is situated in the southern tip of Sichuan, and on the western edge of Panzhihua Municipality. As part of the southwestern region of China, this area displays an intricate array of ethnic, cultural, and economic issues. The development of this area was part of a critical developmental plan by China's central government called the Great Opening the West--and this area became an arena of various stakeholders seeking interest under the forces of China's economic development. Futian Township is close to Panzhihua, the location of one of the major steel industries of China. Tilt often juxtaposes the privatized small industries in rural Futian Township and the state-owned big industry in Panzhihua, showing their divergent developmental paths under different institutional treatments. Such juxtaposition provides insights into the nature of the political economy of rural China.

Tilt offers a vivid description of the trajectory of rural industries in the frontier area of contemporary China. He takes a close look at three small industries in Futian: the zinc smelter, the coking plant, and the coal washing plant. The three rural industries share a few commonalities: they all used to be collectively owned by the township cooperatives, but were privatized during the trend of developing rural industries since 1978; they were all operated by entrepreneurs and workers from outside Futian but constituted a significant portion of the township revenue; and they were all sources of concern over environmental and health issues among Futian residents due to their heavy pollution. Furthermore, they were all unequivocally closed down in the early 2000s, with the enforcement of district Environmental Protection Bureau policies and in a growing discussion of international and national "sustainable development."

In his discussion on the meaning of "sustainability," Tilt posits an important epistemological issue that applying a concept or a theoretical  framework derived from the Western world into China's context entails reconstruction of its connotation. Tilt draws on extensive discussions of "sustainability" from international scholarship and argues that we need to differentiate the environmental values (i.e., the ideal of sustainability) of the Western scholarship from those in the mind of rural peasants in a developing region of China. While sustainability means environmental protection in the international community, it only means economic development and fulfilling livelihoods by compromising local ecology for rural peasants. As the developing world was and still is experiencing the dilemma of economic development and environmental protection, thousands of small rural industries were clapped in between the state's idealistic policies and local pragmatic concerns. In this sense, Tilt's argument is informative and insightful in view of the state-society relations in the discourse of "sustainability" of current China.

Tilt's analysis of the task of a sustainable development undertaken by a multilayered state is especially intriguing in the Futian case. Tilt argues that "the undeniable contradiction" between "sustaining" and "developing," along with "an ambiguous and unpredictable political economy in China," was the main reason for the eventual closure of small rural industries (pp. 145, 160, 159). Tilt found that "for Futian's cadres and villagers alike, achieving sustainability seemed akin to reconciling wenbao ('warmth and fullness') with huanbao ('environmental protection')" (p. 160). Such a contradiction also contributes to the diverse interest in different levels of government: the central government promoted a model of sustainability that borrowed from international policy without concern for enforcement tactics or their consequences; district government acted more pragmatically and weighed the benefits of pollution enforcement against economic costs; and the township government envisioned sustainable development as continuous economic growth unfettered by environmental regulation. Therefore, the discourse of "sustainable development" is indeed an arena of negotiation and reconciliation among levels of government of China, and most probably, a venue of the central government exercising its power over peripheral areas while retreating in some other ways. As Robert P. Weller has also mentioned, the anthropological concept of "heterarchy" may "provide a better metaphor" to analyze the China state, and heterarchy "does not result in the unified structure of an organizational chart, but rather in a conglomerate of multiple, competing orders of power and authority."[1]

Tilt's discussion of a "civil society" in rural China is relatively weak in contrast to his salient discussions of sustainability mentioned above. He defines the term "civil society" as "an intermediate realm between the family and the state characterized by collective action around shared values, interests, and goals," a definition broad enough to incorporate
the Futian case, regardless of the political meanin is the term always carries (p. 155). In chapter 5, Tilt suggests that civil society comprises two key elements: pillars and processes. The two pillars are the "deep historical legacy of public mobilization and protest" and a growing consciousness of "rightful resistance" (pp. 121, 122). These pillars then "support a variety of processes, or strategies, for mobilizing civil-society organizations around environmental interests" (p. 123). Tilt uses the closure of the zinc smelter as empirical evidence for an emerging civil society in rural China. While it is thoughtful to offer this case as a peculiar type of civil society in which people acquire their rights within the framework of existing legislation and regulations, Tilt does not offer in-depth stories of Futian people's coalition and their strategies of achieving legal rights. Without a more substantial discussion of the people's actions, his examination of the civil society seemingly lacks solid ground.

Furthermore, the nature of such a civil society needs further investigation. As mentioned in a later part of the book, people collected the physical remnants of closed factories for their own use, which might result in other forms of pollution. The motives of rural people to organize a coalition may have been more out of private rights than their environmental interests. In this case, the civil society discussed in this book is close to what James C. Scott has labeled the "moral economy" among Southeastern Asian peasants, and resembles what Jeffery N. Wasserstrom has pointed out as the "NIMBY" (not in my back yard) phenomenon in China's rising middle class which concerns their private rights more than posits political requests, although such ad hoc coalitions could develop into large-scale protests that challenge the legitimacy of power authority.[2] Although Tilt considers environmental values as the moral dimension of people's livelihoods, one might wonder to what extent the Futian residents' acts were derived from a shared value of environment and concern for environmental pollution.

While this book unfolds, many questions arise. For example, how did the ethnicity issue (i.e., relations between the Shuitian people and the Han people discussed in chapter 1) play a role in the discourse of sustainable development in rural China? How does the Futian case compare to the thousands of townships in rural China? Are there any indigenous or traditional cultural notions or practices on ecology among the Futian people? How has industrialization changed those cultural notions and practices on local ecology? Hopefully these kinds of questions will drive further inquiries into the sustainable development of rural China.

All in all, this book is an important addition to environmental studies of China. It posits an intriguing argument about  relationships in rural China through extensive ethnographic work, and offers a further understanding of the discourse of sustainability in China. I would recommend this book to anyone who is interested in either sustainability or contemporary China studies.

[2]. This concept was first brought up by E. P. Thompson, and was further discussed by James C. Scott in his book The Moral Economy of the Peasant: Subsistence and Rebellion in Southeast Asia (New Haven: Yale University Press, 1977); and Jeffery N. Wasserstrom, "NIMBY comes to China," in China in 2008: A Year of Great Significance, ed. Kate Merkel-Hess, Kenneth L. Pomeranz, and Jeffrey N. Wasserstrom (Lanham: Rowman and Littlefield Publishers, 2009), 15-19.