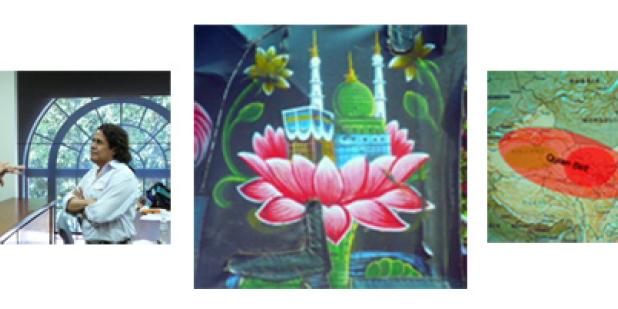 China has more Muslims than any Arab country besides Egypt. The four countries with the greatest number of Muslims are located in Asia. Still, too few courses about China and the rest of Asia include discussions of Islam and too few discussions of Islam in world history courses note the place of Asia in Islamic history. On May 5, 2007, participants in a U.S. – China Institute workshop on Islam in Asia worked with five specialists to better understand the history of Muslims in Asia and their place in contemporary societies. Beyond this Islam in Asia workshop provided educators with essential background information, compelling case studies, and solid strategies and materials to bring these societies, historical and contemporary, to life in their own classrooms.

They teach social studies, language arts, and other subjects at the middle and high school levels. State and national educational standards mandate that students in those grades learn about Islam and its spread, but many teachers lack the preparation necessary to truly engage their students on these subjects. These teachers eagerly gave up their free time to explore Islam in Asia with some of the top scholars in the field.

Cultural anthropologist Barbara Pillsbury, currently working with International Health & Development Associates, launched the workshop outlining that Islam came to China over the Silk Road and via maritime routes, stressing that these devotees were interested in trade rather than conquest. By the Song dynasty (960-1278) mosques and Muslim restaurants were well-established in many Chinese cities. Pillsbury highlighted the dual identity that Muslims in China, noting that the Chinese state officially recognizes ten Muslim ethnic minorities.

The images and objects Pillsbury displayed stressed the diversity of Muslim communities in China. She reviewed the Five Pillars of Islam as practiced in China, noting that many Muslims in China believe that avoiding pork, such a mainstay of most Chinese cuisines, is an important manifestation of their submission to Allah. Pillsbury de-exoticized Muslims in China by vividly taking participants into the everyday routines of Muslim families.

Dru Gladney, anthropologist and president of the Pacific Basin Institute, has been conducting fieldwork in Western China, Central Asia, and Turkey for more than 20 years. His session, entitled Negotiating Islam in China: From Muslim to Minzu, was a wide-ranging one, exploring the arrival of Islam in what is now China and the efforts of 20th and now 21st century states to unify China and regulate identities. Gladney encouraged teachers to focus on the question of identity because it breaks stereotypes and stimulates questions of belonging and accommodation.

Gladney noted that the Republican-era government (especially 1927-49) recognized Muslims and a few other peoples as distinct within the nation, using a term, minzu 民族, derived from Japanese. Minzu has been variously translated as nationality and ethnicity. Gladney prefers to think of it as “identity.” The Communist Party-led government of the People’s Republic (established in 1949) drew on the Stalinist-era Soviet formulation for what constituted a distinct minzu. A minzu was to have four manifest characteristics: a common language, a shared territory, a distinct economy, and a recognizable psycho-culture.

Via a multimedia presentation including animated maps, images, videos, and select quotations, Gladney taught about religious practices and contemporary nomadic experiences. Gladney helped teachers understand the current political climate for some Muslim groups in China. He focused on the work of Rebiya Kadeer. A remarkably successful Ugyhur businesswoman,  Rebiya Kadeer was imprisoned from 1999 to 2004. The Chinese government found her guilty of passing state secrets to foreigners. Upon her release she went into exile in the United States, where she continues to push for greater rights for Uyghurs. Her daughter was under house arrest until recently and her son was just sentenced to nine years in prison for separatist activities. Rebiya Kadeer’s work has won the respect of many, including some who have nominated her for the Nobel Peace Prize. Gladney also noted that some Uyghurs have been swept up in the U.S.-led war on terror. More than twenty have been detained at Guantanamo Bay for years. Most have already been determined to pose no threat to the U.S., but as they would likely be imprisoned and perhaps executed if they were sent to China, they remain in legal limbo. Five have been sent to Albania, where they do not speak the local language and live under near house arrest.

Professor Peter Gottschalk of Wesleyan University offered two presentations. In Islamic Diversity in South Asia, Gottschalk began by exploring and dispelling common images of Muslims as violent and deceitful. He traced the history of Muslims in South Asia, stressing their diversity and contributions. Gottschalk took participating teachers into short primary source selections to discuss descriptions of life under Muslim rulers, issues of devotion, commitment to education, the use of religious law, the formation of Pakistan, and the role of women.

In his second presentation, Gottschalk introduced the website he co-created. Virtual Village (http://virtualvillage.wesleyan.edu/index.html) draws upon years of study in Arampur, in northern India. Visitors can take a virtual tour and navigate to different parts of the village to visit landmarks, homes, and other buildings and also click on “hotspots” on the map that provide greater details about the area.  Additionally, the site offers audio clips of interviews with residents, business owners, and workers in the village.

Believing that turnabout is fair play, the site includes an interview a villager conducted with Mathew Schmalz, Gottschalk’s co-creator. Later this year, Gottschalk will publish a book that many teachers are likely to find compelling. Islamophobia: Making Muslims the Enemy (Rowman & Littlefield) is his look at political cartoons and other negative depictions of Muslims.

Beginning with a quotation from The Travels of Marco Polo, Professor David Atwill from Pennsylvania State University covered ethnolinguistic diversity and Chinese religion in Islam South of the Clouds. Though many people outside China know that many of those living in Northwest China are Muslim, they are surprised that Muslims in Southwest China are numerous and have a rich history. Atwill has focused on the history of these peoples and has written extensively on their complex and sometimes violent relationship with Chinese states.

In the final presentation of the workshop, Gary Mukai, a curriculum specialist with the Stanford Program on International and Cross-Cultural Education (SPICE), discussed the two curriculum units each participating teacher received (Ethnic Minority Groups in China and Islamic Civilization and the Arts) and then described ways that materials and methods shared in the earlier presentations might be adapted for secondary school classrooms. He emphasized issues of identity, but also noted that the ideas of migration and acculturation afforded teachers the chance to include Islam in geography, math, and other lessons.

Teachers have continued to discuss the presentations and to exchange their own ideas on introducing the concepts covered to their students. This discussion continues at the USC U.S. – China Institute’s web forum for teachers.

****
A sampling of anonymous evaluations of the sessions hint at their impact on teachers:

“Fascinating journey into China’s Muslim world. The visuals and especially the realia were helpful in understanding these varied cultures.”

“This offered a very different view of Muslims than I was accustomed. Thank you for sharing your experiences, insights, and images.”

“The historical overview was fascinating. I appreciate the article clips, statistical charts, and video clips. This presentation inspires me to learn more.”

“I appreciated the presentation on nationalism and recent Chinese history.”

“Amazing research. Useful for me because I need to teach about the complexity of identity.”

“Great discussion questions – I can use these to launch lessons.”

“I plan to use the ‘Virtual Village’ the first week of my 10th grade course.”

“Appreciated the virtual tour depicting Hindus and Muslims living together in the Indian village… It is important to share with our students…. Eye opening examples of how easily stigmatized Muslims have been.”

“Thanks for the maps and descriptions of China’s ‘Quran Belt.’ These are great teaching tools to engage students.”

This workshop was sponsored by the USC U.S. - China Institute, the USC East Asian Studies Center, the UCLA Asia Institute, the Stanford Program on International and Cross-Cultural Education, the National Center for History in the Schools, and the National Consortium for Teaching about Asia.  Funding was provided through grants from the U.S. Department of Education and the Freeman Foundation.