Stewart, Journeys to Empire-- Enlightenment, Imperialism, and the British Encounter with Tibet, 1774-1904, 2009

This book by Gordon Stewart was reviewed by David Templeman and is republished here under Creative Commons license.
January 1, 2009
Print

The British in Tibet 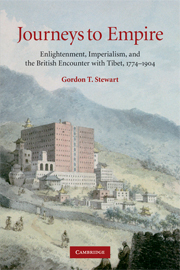 Gordon Stewart's book, has been displayed by scholars in recent years.[1] Stewart's book, the topic of this review, adds something to those other studies in its detailed examination of the marked contrast between both major characters in their approaches to "knowing" Tibet. This contrast is highlighted and refined by Stewart in his examination of the broader areas and the exemplary features of both the Scottish Enlightenment and the high period of late British imperialism. Both these "attitudinal periods" served to shape the approaches of each person towards Tibet.

Overall Stewart is successful in his attempt and makes explicit the various shaping forces which were exerted upon Bogle and Younghusband. In Bogle's case, the result was a man whose active life exemplified the Enlightenment approach, encouraging inquisitiveness, openness to the new, and a willingness to engage with people and situations as they were found on the ground, rather than as abstract ideals. In this he is contrasted markedly with Enlightenment "stay-at-home" intellectuals such as Montesquieu, who did not appear to place his theories into a real-life setting, as did Bogle. Bogle's reasonable and accepting approach to the customs of Bhutan and Tibet, even towards the vexed issues of Indian widow-burning (p. 42) and certain unlikable characteristics of Nepalese and Tibetans are examples of the generosity of spirit which imbued him. On the contrary, we must not imagine that all was sweetness and light with Bogle. Stewart notes that although this placid and low-key approach might well have been true for Bogle's experiences in Bhutan and Tibet, it was not necessarily the case for certain other of his experiences, with, for example, Hindu holy men, whom he disliked intensely,  or in his almost Machiavellian willingness to countenance an invasion of Assam to further the East India Company's interests.[2]

For Younghusband, a product of an entirely different period and set of dynamics, Tibet was an entity which troubled him greatly. His evangelical Christianity made him a narrower person, one less open to new ideas than Bogle. For Younghusband, "Tibetans are not a people fit to be left to themselves between two Great Empires. They have to look to one or the other--to us or the Russians--for protection" (p. 173). As Stewart notes, with this more limited approach Younghusband was often reduced to fulmination and railed against the "selfish, filthy, lecherous Lamas who are bringing all this trouble upon their country for their own ends" (pp. 171-172). Stewart judiciously studies this sclerotic period of British imperialism and examines whether the Enlightenment itself was ultimately "the source for the exclusionary and destructive aspects of imperial ideologies" (p. 8).

A further important point raised is the extent to which both Bogle and Younghusband created powerful images of Tibet from which we still suffer to this day. It appears to this reviewer at least, that both the benign view of the former and the more aggressively shaped attitude of the latter still tend to form the parameters within which much present-day discourse on Tibet is confined, much to its detriment.

Certainly Stewart is wise enough to note the paradoxes within both his subjects and his comments on them serve to ameliorate any fixed attitudes we might harbor towards them. He highlights Bogle's irascible side as a balance to his Enlightenment sensibilities and acknowledges the mystic side to Younghusband the imperial power-broker.

It is in these latter pages of the book that much of Stewart's analysis might have gone one step further. For example, in his discussion of Younghusband's efforts to sublimate the shipboard advances of Miss Beddie (French refers to her as "the clever and pretty Mrs Beddy").[3] Stewart might have taken the reader a tentative step further in his analysis. It is not perhaps too far-fetched to suggest that Younghusband's desire to possess her as a distant and worshipful icon ("she admires me I know ... I want to keep high above any interaction of the senses ... to give her an example of a man who can be a friend without making love to her, to raise her moral standard," p. 224) might be said to sum up something of his attitude to Tibet. Younghusband, with his superior sense of order, morality, and nascent spirituality, felt that he could harness and raise up to higher standards this land, benighted by "lecherous Lamas" with its dubiously motivated and secretive foreign policy aims. What one might call the "Holy Mission" of imperialism, in this case exemplified by Younghusband, is an avenue worth exploring and one which would certainly have added a novel dimension to the chapter.

The author possesses a clear feeling for detail and depth in his analysis and although much of the material is quite well known, it is in Stewart's overall thesis of the nexus between Enlightenment and imperialism as exemplified by Bogle and Younghusband that we find the strength of this valuable and interesting book.

[1]. The following are a small selection of these works: L. H.
McMillan, English in Tibet, Tibet in English: Self-Preservation in Tibet and the Diaspora (New York: Palgrave, 2001); K. Teltscher, The High Road to China: George Bogle, the Panchen Lama, and the First British Expedition to Tibet (London: Bloomsbury, 2006); and P. French, Younghusband: The Last Great Imperial Adventurer (London: HarperCollins, 1994).

[2]. In this dislike of Hindu holy men, Bogle might have been influenced by the Panchen Lama, whose work the Sham bha la'i lam yig (translated as "The Way to Shambhala") contains several passages condemning the Tibetan savant Taranatha (1575-1634) for his credulity in believing everything that Hindu yogis who possessed smatterings of Buddhist knowledge told him about India and the state of Buddhism there in that extremely late period.